Earlier Today, Twitter announced its Lead Generation product, making it easy for anyone to post offers to Twitter and have people claim them without having to leave Twitter.com.

Shortly after, a job ad posted to Twitter, with the ability to apply for the position without leaving Twitter.com was brought to our attention.

We believe it’s the first job listing to allows candidates to apply for the role without having to venture anywhere but the tweet page itself. We’ve attempted to get absolute confirmation from Twitter but the company’s response was “this isn’t something we can help you with.” Given the fact that Twitter’s Lead Generation features only launched a few hours ago, I think it’s fair to say this is the first.

Check out a screenshot of the job posting below and the link to it here. We woud have embedded the tweet but it seems the lead generation section isn’t a part of embedded tweets just yet. 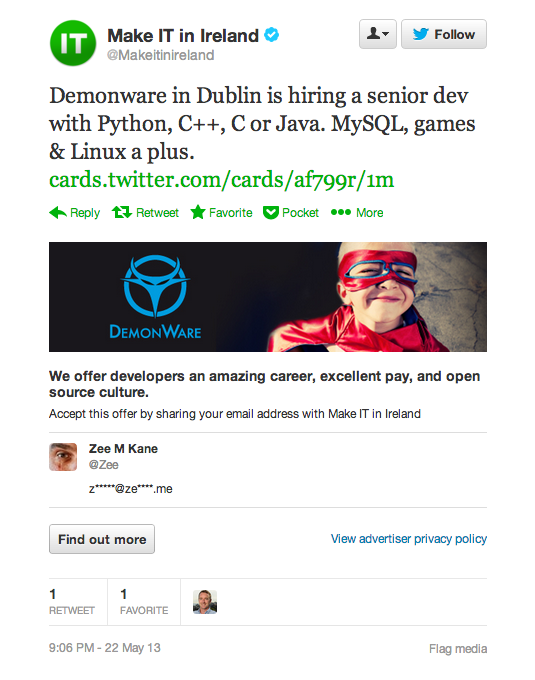 Expect to see many many more of these. And as more appear, expect job hunters to include links to their CV in their Twitter profile, as well as more information about their skills, interests and passions.

Zartis CEO John Dennehy has reported back to us to say “”I can tell you without any doubt: we’ve got a better response to the Twitter ad tonight than anything we’ve ever seen.” Given the fact that this is something of a novelty, it’s hardly surprising. But a sign of its potential as a recruitment platform? Perhaps.