Casey Neistat, a filmmaker with over 800,000 YouTube subscribers, has released his first iPhone app that’s a sort of anti-social network.

Announced today via his YouTube channel, Beme (pronounced “Beam”) is a video sharing social network with a catch: it won’t allow you to shoot any video unless you cover the screen.

The idea is to try and kill the “fake” image that people portray on social media by forcing people to just capture the moment without staring at their screen and interrupting the moment.

To take a video, the proximity sensor above the screen must be covered. Neistat demonstrates in his announcement video by holding the phone to his chest, which then vibrates and beeps to let him know it’s recording.

The videos, which are four-seconds at maximum, are shared to your followers. To react to videos, people can send instant selfies by tapping on the screen, which is a hopelessly addictive way to react.

Once sent, the videos are ephemeral and can only be viewed once by followers. You’ll never see the video you’ve sent, which is surprising, but fits with how the app trying to reduce ‘fake’ social sharing.

In the announcement video, Neistat said that he’s trying to “remove the self awareness and self-consciousness of sharing video.” 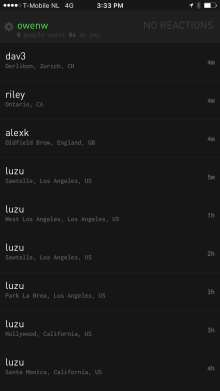 The idea sounds a little odd, but in practice is actually quite rewarding and fun. The videos I’ve see on Beme are about as raw as it gets and give little windows into other people’s lives. Beme actually shows you how many seconds people have lived through your eyes.

Think of Beme as a mashup of Snapchat and Twitter. Videos are ephemeral and are shared with your followers on Beme. You can follow anyone and amass your own following, then broadcast your Bemes to everyone who’s following you — you don’t necessarily need to be friends.

Beme is incredibly basic right now, but thats in its favor. It’s dead easy to use.

Neistat built the app in collaboration with Matt Hackett, formerly VP of Engineering at Tumblr.

You can download the app for iPhone today, but it’s using an invite-only waitlisting system so you’ll need to hold tight before you can get in (or know someone with an invite code).

It’s worth noting that Neistat also says that he “highly recommends waiting” as a better version will be available next week.