Pandora users, rejoice! At least, Pandora users that also own a Pebble smartwatch, rejoice! From today, it’s now possible to control playback of the Pandora app installed on your iOS device from your Pebble, the on-demand radio streaming service has announced. 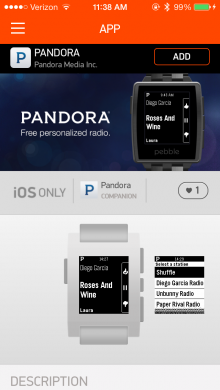 You’ll still obviously need to have your phone close by (and paired via Bluetooth) to make use of Pandora’s new app, but once you’re set up, users can view and change stations, give songs a thumbs-up or thumbs-down, and skip, play and pause tracks.

While it’s a simple enough integration, it’s the added freedom it brings users that is the real benefit. It’ll now be a whole lot easier to switch stations while out for a run, or in the middle of cooking the kids dinner, for example. A version of the app is also on the way for Android users, the company confirmed.

➤ Enjoy Pandora on Your Pebble Watch for iOS! [Pandora]