BSkyB (‘Sky’) is trialing a new Twitter-based tool that lets its subscribers watch and record movies and TV shows by interacting with a tweet.

If you see ‘#WatchOnSky’ within a tweet from Sky, it can be expanded to reveal ‘Watch’ and ‘Record’ icons that link directly to Sky’s mobile TV service Sky Go. Indeed, this will only work via Twitter on mobile, and you will need to ensure your Sky+HD box is linked to your Sky iD. 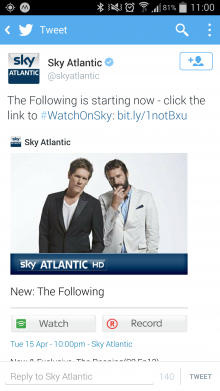 Sky and Twitter have previously partnered to broadcast Champions League clips within tweets too, but this latest move represents one of the first times a UK broadcaster has let users control their viewing in such a way. It’s not an entirely novel concept though – Twitter and Comcast have introduced a similar feature in the US previously, while Brazil’s very own Sky TV has flirted with similar concepts in the past too.

Related read: From Twttr to TV