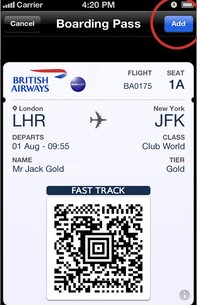 With this update, all BA customers’ boarding passes will now be presented directly within Passbook, letting you download them for use in more than 100 airports around the world.

The company also says that it will shortly enable direct links to boarding passes from the iPhone’s lock screen, so you don’t have to keep on fumbling about as you’re about to board.

This latest update also sees a number of other bug fixes rolled out. British Airways v4.4 is available to download now.