Gone are the days where we were all satisfied with just a sizable collection of filters in our camera app. As users get more sophisticated and creative with their phone cameras, many are demanding more options, such as beauty touch-ups, decorative stickers, handwriting functions with a wide range of pen styles etc.

More camera apps, particularly in Asia, are starting to resemble purikura machines, the uniquely Japanese photo booths that allow you to decorate your photos with a stylus on a touch-screen.

Purikura originates from the word Print Club (Purinto Kurabu) and back in the early days, you could only take photos with cute frames featuring Japanese cartoon characters such as Hello Kitty. However, the latest purikura machines do more than that – eye enlargement, leg slimming effect, skin whitening, lip and hair color change are just some of the beauty features you can play with.

Each purikura machine has its own unique features – this particular one gives you long, slim legs. (I can testify that it does indeed work!)

The essence of purikura is not in the camera, but in the decorative booth. Every machine has its own set of decorative stickers and themes – photo decorating has never been more fun.

We’ve waded through the many camera apps out there to showcase the top five purikura-inspired services. You can use them as all-in-all shooting/editing/sharing apps, or simply to touch up photos that are already on your phone.

Developed by South Korea’s SK Communications, Cymera is a complementary photo app for its Cyworld Service (Korea’s popular social network service). However, you can use the app without the need to log-in.

Cymera has most (if not all) of the functions you want in a camera app and is usually my go-to app, along with Naver Camera. The interface is uncluttered and easy to navigate. With seven camera lenses, photo correction, beauty touch-ups, collage function, handwriting / brushes, text input, decorative stickers – you name it, it has it.

If I have to name a slight disappointment, it would be that although the camera offers everything, the stickers and brush collection are not impressive. The small collection of stickers is relatively cartoonish compared to other apps.

(original photo not taken with Cymera)

Yet another Korea-developed camera app, Naver Camera offers only 4 camera lenses, lesser than Cymera. However I prefer the collage function in Naver camera as it allows you to choose the collage pattern first and shoot accordingly, in addition to creating the collage with gallery photos.

Originally in the Korean language, the app has been partially localized into English but some functions curiously remain named in Korean. However, everything is intuitive and you should be able to navigate the app without any Korean knowledge. 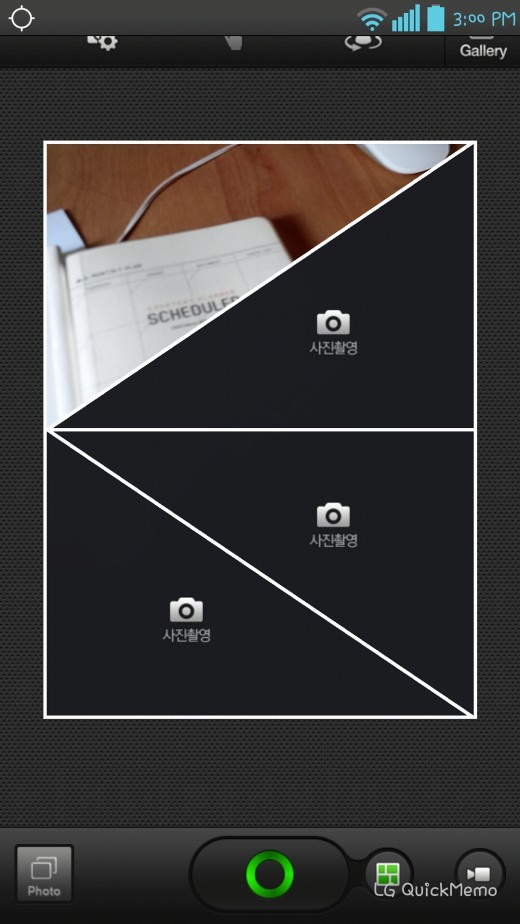 A particularly strong point of Naver Camera is its large sticker collection, not unlike what you can find in LINE Camera, but they are all free. I particularly like the series of Korean phrases because they are so catchy, but you may want to exercise caution in using them unless you are sure you know what they mean.

Naver Camera also has a larger brush and font collection, for those who love to write on their photos.

One complaint is that the app automatically dials up the brightness of my phone and only reverts to my original settings when I exit the app.

Similar to Instagram, Snapeee is more of a photo sharing service than a photo editing app, but it comes with a better camera and more functions. Snapeee is a fashion app and the theme is apparent in its stickers, which are similar to those you will find in Japan’s fashion purikura machines. Filters and frames are all fashion-themed, which makes it a good app to capture all your #ootd (outfit of the day) shots. 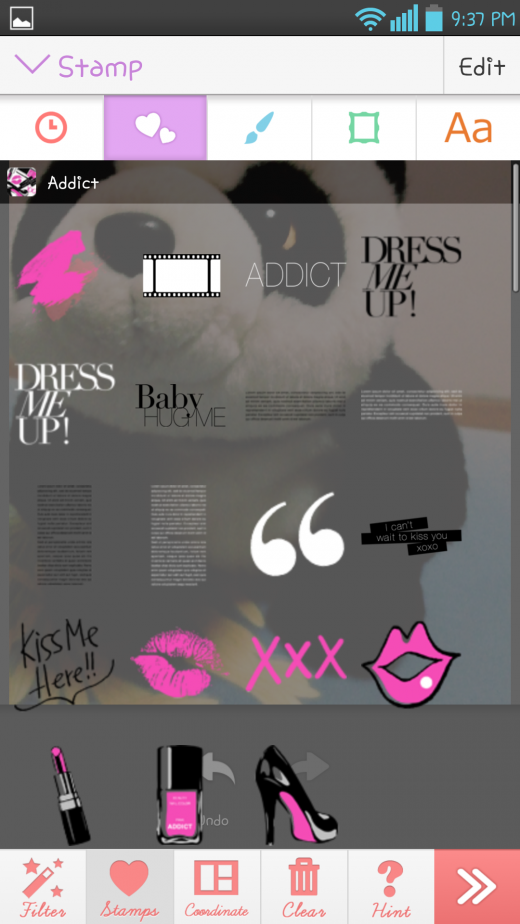 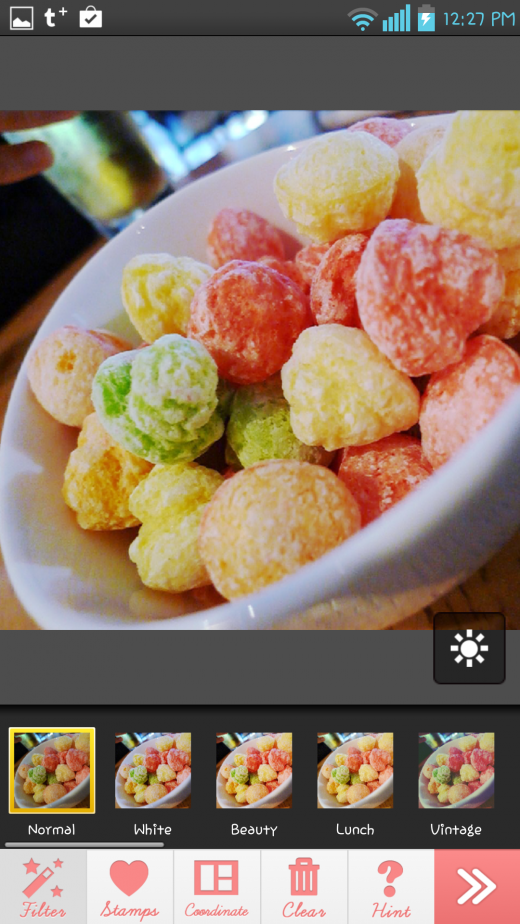 However, unlike Instagram, it does not allow you to save edited photos unless you post the photo on its service. One way to get around it is to post the photos up as “private”.

For those who are less into decorative stickers but more into fonts, Line Camera offers a wide range of font types. My only complaint is that you have to download them one by one to get the whole collection. Compared to the other apps, Line Camera also has a larger number of frames. Line’s 230 million users will be happy to know that they can use their favorite Line character stamps as decorative stickers in the camera app.

The app also offers several preset backgrounds which you can choose and go straight into decorating. Potentially useful for those who are more interested in creating decorated messages instead of photos.

Purikura fans will delight in having an app that looks and works in similar ways to the photo booths. The app comes with a wide range of templates (pre-decorated frames) that will instantly beautify your photos with a single click.

For those who want to decorate their own photos, the app offers a good collection of filters, frames and stamps that resemble what you get in the photo booths. More decorations are available in Decopic’s shop and you can earn coins to purchase them by downloading free applications from advertising pages.

One nice feature is the font collection – the app has a good collection of fonts customized for different languages besides English: Korean, Japanese, Chinese, Thai and Vietnamese.

The next time you’re in Japan, do try out one (or several) of those purikura machines. Until then, these apps should do just nice!

All images via TNW