This article was published on December 11, 2011

As they say, behind every great man there’s a great woman, and in Fred’s case that woman is Joanne Wilson. The two met at Fred’s fraternity house at MIT and have since enjoyed more than 25 years of married bliss, working from pennies to payouts and raising 3 terrific kids in the process. To call Joanne the woman in the background is grossly understating her significance, however; through her work as an angel investor, mentor and blogger, Wilson has become a monarch in New York City’s entrepreneurial scene.

She’s an adviser and investor to numerous companies, most of which have something to do with her epicurean passions, including: Curbed (Eater/Racked), Food52, Red Stamp, Rick’s Picks, Hot Bread Kitchen, Gotham Gym, The Moon Group, Catchafire, Loverly, Daily Worth and MOUSE. She writes almost every day at Gotham Gal, her blog that receives over 40,000 views a month.

I met with Joanne Wilson on a rainy, weekday morning in Greenwich Village at Café Cluny (where she’s currently holding down the Foursquare Mayorship). Over poached eggs and a bowl of oatmeal, we discussed life, love, the Internet and all things in between. 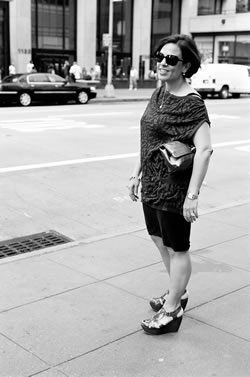 This past year, Wilson turned 50, and celebrated with a huge party in NYC followed by a couples’ weekend in Napa. Other than New York City, Wilson calls L.A. home. She’s clearly an urban dweller and isn’t built for suburban living. She reads on a Kindle. She loves food. And she’s an entrepreneur. In fact, she’s always been an entrepreneur. Wilson describes herself as an entrepreneurial kid who sold cinnamon sticks, peppermint sticks and once convinced the entire neighborhood to come pay to hear her sing. As the oldest sibling of divorced parents, feeling financially stable has always been high up on Wilson’s priority list.

“Writing is really cathartic. You have all this stuff rattling around in your brain and you need to put those thoughts down on paper, or the computer. Then you share them with the world and a community comments and says, ‘I’ve been thinking about that too’. Your thoughts create this larger audience of conversations.”

CBM: Both you and Fred have an envious amount of engagement on your blogs, what’s your secret formula?

JW: It’s interesting what people comment on. Readers tend to comment the most on things people don’t talk enough about: Life, balance, a lack of identity, trying to figure it all out. Most people aren’t that honest or transparent about those things. It was a sigh of relief for many when an entrepreneur stood up recently and said, ‘I cried every single day for the first year building my company.’

Several years ago, while working at Macy’s as an Assistant Store Manager, Wilson once baked 1,000 cookies for the staff during the busy holidays. “No one had every done anything for them,” she says. “But for me, it was an enjoyable day.” For Wilson, cooking is clearly therapeutic. The entire Wilson family, including kids Jessica, Emily, and Josh, is talented in the kitchen.

When she leaves her kitchen, Wilson loves dining out. She can’t pick a favorite restaurant; she says it’s changing all the time. In addition to the dozen tech companies she’s invested in, she’s also an investor in several restaurants including Gabriel Stulman’s restaurants and Frankie’s on 11th and Hudson.

“Investing in restaurants is risky business. Owners must have some kind of proven track record. And these days, restaurants are taking way too much money… similar to the way Internet companies are behaving,” she says.

Wilson is also an avid food blogger, literally taking photos of everything she eats and writing up reviews of all the restaurants she visits. Here’s one delicious looking photo she posted on Gotham Gal.

CBM: You know that question, “Where do you see yourself in 5 years time?”…

JW: Yes, I push entrepreneurs to ask themselves this all the time and to have advisory committees or boards to reinforce this. If you don’t have those meetings every 4-6 weeks, a year will pass and you won’t have hit your high spots. It’s how Fred started Flatiron. Someone asked him, ‘Where do you want to be in 2 years?’ and he said, ‘I want to own my own venture capital firm.’ So he got started.

It can be hard for CEOs because oftentimes they have no one to talk to except for their investors or other CEOs. The question, “Where do you want to be in 5 years time is like writing a business plan. If you write it, it forces you to think things through in a very different way that you don’t think about on a daily basis.

Something will come to you and you’ll be like ‘that’s what I want to grab’. And there are certain stages in life when it’s most important to ask yourself that question. (She tells me turning 30 is a great time.)

I’m forcing Fred to think about that too. He loves what he does right now but it’s still important to think ahead. I’m looking at my kids and thinking, in two and half years, we’ll be empty nesters.

When it comes to building your own company, I think young women want to hear from older women more because they’re thinking, ‘Where am I going? How am I going to do this? How will I be working when perhaps I’m going to end up having a family? That’s going to be a whole different world! But I don’t want to lose what I”m doing when I have these kids, etc.’

Having kids is all about the exit strategy not the entrance strategy. If I could do it all over again, I’d have kids earlier… You don’t want to be 65 when your kids are going off to college.

For women, balance is much more difficult. Women move in waves. Fred moves up a ladder. When you’re younger, balance is work and friends and family. Fred is family and work and that’s it. Men and woman are different animals.

So where will I be in 5 years time? I could start a fund if I wanted to, but I prefer to remain an angel investor for now. “I’ve always had innate skills to see what’s coming down the pike. If it wasn’t the Internet it’d be something else. I like supporting the young and the up and coming-whether it’s tech companies, restaurants or art.”

Last summer, I took 6 weeks off to focus on absorbing life around me rather than acting on life around me, which was really great. So you know, sometimes I’m not so sure you’ll know til you get there… I’m a big believer in not looking back and saying ‘I shouldn’t have made that decision’. You have to believe that you are smart enough and know that you made the right decision at that time.

This January 2012, Wilson is co-hosting the second annual Women Entrepreneurs Festival with Nancy Hechinger of NYU’s ITP program. The festival celebrates women entrepreneurs at every level. There are six panels with five entrepreneurs on each: taste makers, change makers, community makers, knowledge makers, makers of stuff, art makers. The audience will include 250 women, ages 19-70.

CBM: In an interview this year, you said that one area where women could improve is that “women don’t stand on a table and say I rule.” How can we effectively encourage other women to do this? 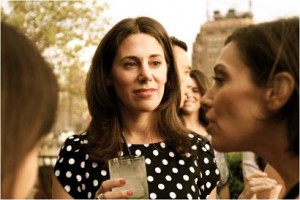 JW: I think Rachel Sklar [founder of Change the Ratio] (pictured right) has done that. Change the Ratio, as a mentoring community, focuses on collaboration around women, which changes a woman’s psyche and raises her confidence level. She’s enabled many women to raise money and start a business and created a community to continue that change.

I hope we do that through the conference I’m putting on with ITP’s Nancy Hechinger. We got together for breakfast one day and started talking about the changes she’s seen in the dynamic of her classroom. ITP boasts an almost even ratio of female to male students. So, we decided with all the women in tech that we’d do a conference to focus on all these phenomenal women. We decided we’d not talk about the negative but instead, focus on the positive. I hope that from the Women Entrepreneurs (WE) Festival there will be conversations and mentorships that come about and that women will see all of the opportunities that are out there.

I tell women to stop apologizing. Think to yourself: I’m smarter than every single person in the room. I deserve that raise. I know what’s going on. Women should be women. They shouldn’t be men but they should have the confidence in their abilities to ask for what they deserve. Sit at the table. If you try to raise money with someone who doesn’t understand your business model, you’re not talking to the right person. The majority of the money handed out has nothing to do with men not wanting to support women. Oftentimes, it’s because they don’t understand the business models.

If you look back in time, women invented the cooking stove, refrigerator, dishwasher and ironing board. But also Kevlar, the Apgar test, circular saw, Scotchgard, fire escapes, liquid paper, the windshield wiper, the life raft, ZipCar and the first software for computing. One also developed a self-cleaning house, but it has never received a patent. A lot of these inventions could only have been founded by women. So, we should stop worrying about why there aren’t enough women in big data companies and start realizing the value of all the women who are starting companies, many of which are naturally in the e-commerce space.

If we can take that money out there, get involved and give it to women who are creating businesses, we will have changed the ratio.