Box today announced a major update to its Android app with its release of version 2.0. It’s been a busy few weeks for the cloud storage specialist, who only last week announced the release of its dedicated app for Windows 8. With this release, users are now able to streamline their workflow and also be productive while on the road.

With 36.9% of all activations in the enterprise belonging to Android devices, there is great incentive for Box to make the necessary improvements to this specific app. And with the popularity of Google’s Nexus 7 tablet and even the Samsung Galaxy S III phone, it’s no wonder why the company decided to make an update — soon we might even see Box’s One Cloud service getting an update in order to keep up with the iOS version.

The new update sees the introduction of a host of more features, including perhaps the most notable, document viewing capabilities. Users can now simply peek at a document or flip through the entire deck of a PowerPoint or Keynote file without needing to go through a third-party — very similar to what you can find on the Box Web app. Support for more than 75 different file types makes searching through and viewing content considerably more straightforward.  The content of every file opened will be rendered straight from the app and can be viewed right from your Android device — all without a hitch.

Box uses Android’s multi-touch interface to create a new swipe feature within the document, which makes scrolling between files very easy, accesible, and a breeze to use. This, again, will work with all file types.

For those frequently on the road, being able to access files offline is incredibly important. Today, Box is making that possible on its Android app — users can now access whole folders when they don’t have an Internet connection. This offline feature also works the other way, allowing users to save content while they do not have a Web connection. It also has versioning capabilities so you’ll know if a file is the latest one. 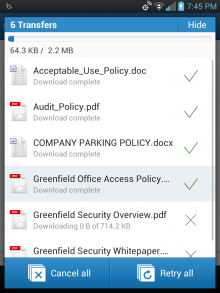 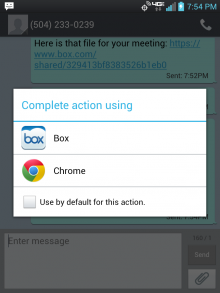 With the addition of a Transfer Manager in the app, users are now able to keep track of files that get uploaded to Box’s server. Besides having a progress bar, users can now cancel pending requests, retry ones that have failed, and fix others that have encountered some other technical issue. All completed transfers can be reviewed in a list and accessed right from the app.

It seems Box thought about every aspect in providing a better and more enjoyable user experience. Now, users will not have to deal with the browser acting like a middleman — instead, all actions go from an email to the app, nothing in-between. The company believes that “when opening links to Box content, you should be able to use the app if you have it.” What this does is makes simple tasks less frustrating and, not to mention, time-saving.

Other tweaks to the app include performance enhancements, “requisite bug fixes”, and Korean localization, which wasn’t available before. The timing of this is interesting because fellow cloud storage company Dropbox recently announced it was making its service available in Korean to coincide with the launch of the Samsung Galaxy S III, which is an Android phone.

With this update, Box has certainly addressed all the major operating systems that the enterprise uses when sharing data and information.

The update to Box for Android can be downloaded straight from the Google Play store today.