Arriving for US consumers back in 2010, BillGuard sells itself as the world’s first ‘people-powered antivirus system for bills’. If you’re new to BillGuard, let us explain.

BillGuard’s predictive algorithms alert you when there’s unexpected charges such as hidden fees, billing errors, scams and fraud on your credit card bills. It also serves up warnings when a similar dubious charge has been flagged by other users, or receives a complaint elsewhere on the Web. As such, the ‘BillGuard brain’ becomes more accurate over time.

Last July, BillGuard finally went mobile with its launch for iOS. And today, after an extended beta period, the service is now available for Android users too, news that follows its launch in Canada last month.

From our first impressions, BillGuard has very much been built with Android in mind, and sports a slick, smooth interface. And for those accustomed to fitness-tracking apps, the general ‘look and feel’ here may seem a little familiar.

You can sign in with Google+, or use a good-old fashioned email address for this. You then tap the ‘cross’ to add your various credit cards and bank accounts.

Pretty much all the mainstream US banks are included, and if you’re at all familiar with Mint, connecting your account will be a breeze.

Within the settings menu, you can stipulate which spending categories you wish to view (e.g. ‘Clothing’, ‘Cash’, ‘Eating Out’), and you can set up notifications for when new charges hit your account, which can be daily or weekly.

While BillGuard does follow similar services such as Mint.com by letting you see how much you’ve spent on various things (i.e. helping you budget), this is not its core raison d’être.

Indeed, BillGuard’s main selling point is around security and saving you money through analyzing large swathes of data.  If it detects something suspicious, it raises the red flag and asks you whether you want help recognizing a charge, and allows you to contact the merchant directly through the app.

While the design itself is nice, the general usability is great too, with Mailbox-like swipes very much the order of the day when confirming or questioning charges.

Coinciding with the new app launch today is a new feature that’s rolling out across both Android and iOS platforms. Personalized data-breach alerts inform you (email and in-app) when a business you’ve shopped at has been breached. 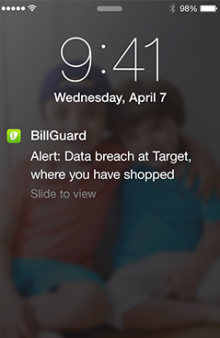 For example, we saw recently that PIN details and other personal customer information had been compromised at Target. It’s this “data-breach epidemic”, and the anxiety it causes, that BillGuard is tapping with these new alerts.

When we last caught up with BillGuard, it was free to track two bank cards but then cost $45/year, or $4.99/month to unlock unlimited access. In February this year, it was made completely free.

While the service has been in beta for a while on Android already, today’s official public launch also introduces support for Android tablets. And you can download it in the US and Canada now.