No longer are iOS users chained to the default keyboard. If a developer can build it (and get it through the App Store approval process), you can add it to your iPhone and iPad. Get ready for an onslaught of keyboard apps.

With the launch of iOS 8, you now have a plethora of apps that allow input in all manner of ways. From swiping to type, to a keyboard that lets you type out GIFs.

It’s an exciting new finger-inputting world out there for iOS and here are our favorite apps to help us navigate to a better tomorrow. Or at least add cool GIFs to our text messages: 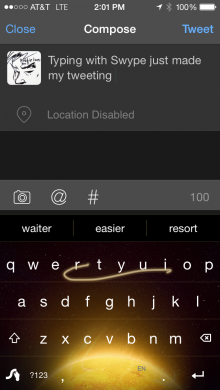 Swype has been available for Android for five years. In fact, some OEMs have set Swype as the default keyboard on their devices. So it’s not that surprising that as soon as the WWDC announcement that third-party keyboards would be supported, the company would confirm one for iOS.

Instead of tapping to type, the $0.99 Swype lets you swipe your fingers across the keyboard to create words. The algorithm determines what you’re typing and it appears in your text field. The app also learns how you string words together and starts offering suggestions. Plus, it has a user generated dictionary so you can add words like nicknames.

Do you really need a GIF keyboard? Of course you do. Words are yesterday’s news. The new hotness is sharing your intimate feelings via a series of moving images, probably filled with cats. Here’s a video to help you see how you’ll be texting with your friends once this app goes live.

You can search PopKey’s library of GIFs from the keyboard. In addition to a selection of curated GIFs, the app also allows you to upload your own GIFs. You can access recently used GIFs and favorite GIFs for later use. You can sign up to be notified when PopKey goes live in the App Store. They’ll probably send you a GIF.

Fleksy was one of the first companies to give a glimpse of its new iOS 8 app back in June, and given its existence in the Android realm already, the San Francisco-based company has garnered millions of users over the past few years. It’s now available system-wide across iOS devices.

Fleksy uses what it calls ‘Geometric Intelligence’ to combat sloppy and inaccurate typing, predicting where it thinks you meant to hit on the keyboard based on your typing patterns. This should help users type more quickly – in fact, Fleksy was recently used in a world record-breaking ‘fastest texter’ competition.

If you’re going to make a custom keyboard might as well make it intensely custom. That’s what Minuum is. It shrinks the traditional keyboard down to where all the letters reside at the very bottom of the display. It gives you back all that real estate you’ve lost to the default keyboard.

While you’re typing, the app is smart enough to determine what you’re trying to write and auto-corrects on the fly. So now you can see more of the conversation while tapping on less surface area. Minuum will launch at $1.99. The regular price is $3.99.

Like Swype, SwiftKey lets you swipe your way along the keyboard instead of hunting and pecking. It also learns about your typing habits and starts to predict what you’re about to type.

What sets it apart is that it can be linked to your Evernote, Contacts, Gmail, Facebook and Twitter accounts. Now it’s grabbing data about real-life names and whatever odd screen names your friends have come up with on Twitter.

Plus if you’ve used SwiftKey on Android, you can sync your account and have all the prediction data the app has gathered ready to go when you install the free app on iOS.

When Apple announced that third-party keyboards would be supported I was genuinely excited because services like LastPass and 1Password would become about a thousand times easier to use on my iPhone. But, it turns out that Apple has limited its third-party support. No third-party apps are allowed to access the keyboard while filling out a password field. In other words, you can’t have an app auto-populate your 20-digit alphanumeric password on iOS.

So both apps have come up with work arounds-using other iOS 8 technologies. LastPass is using an extension for Safari for quick logins and will have integration with the Touch ID for authentication. Just navigate to a secure site, launch the LastPass extension in Safari and use Touch ID to prove it’s you. The extension will autofill the username and password on the site.

1Password is using app extensions to get around the Apple’s ban on third-party keyboard password fields. It even supports Touch ID via its integration. The scenario requires that other apps integrate 1Password’s extension into their app. Some of the apps that have already done this are Slack, Twitterific and HipChat. Plus 1Password says it’s being supported by over 100 apps.

There are of course other keyboard apps on their way to the App Store. Once those apps are live and we can actually talk about them, we’ll add them to the list. Until then, happy tapping, or swiping, or whatever you’re doing with your iPhone now.

Don’t miss: iOS 8 review: The real advances here are yet to come