Today is World Day Against Cyber Censorship, and international watchdog, Reporters without Borders (RWB), has released a new report, updating its ‘Enemies of the Internet’ list.

It is not at all surprising to find that the Middle East and Asia make up the majority of countries on the list, and that in the wake of a crackdown on protests over the past year, Bahrain is one of the latest additions.

Over the past year, we’ve seen foreign nationals deported from Bahrain on the basis of content shared on Facebook, have seen services like Bambuser blocked in the country, and have even witnessed Internet users in neighbouring countries arrested for criticizing Bahrain’s ruling family.

Other changes to the list include the addition of Belarus to the ‘Enemies’, joining long-standing members Burma, China, Cuba, Iran, North Korea, Saudi Arabia, Syria, Turkmenistan, Uzbekistan and Vietnam.

Countries that are currently under surveillance include Australia, Egypt, Eritrea, France, Malaysia, Russia, South Korea, Sri Lanka, Thailand, Tunisia, Turkey and the UAE. Libya and Venezuela have been dropped from the  ‘surveillance’ list, while India and Kazakhstan have been added.

The many faces of censorship

In the report, RWB takes an in-depth look at the various methods authoritarian governments have used to suppress the flow of information – from completely pulling the plug on access to filtering out unwanted content. 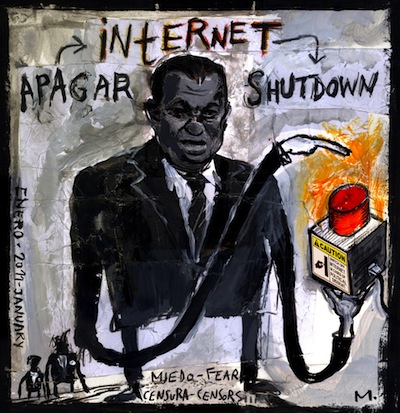 Countries guilty of cutting off access to Internet or mobile communications include Egypt, Congo, Cameroon and Kazakhstan, while China has used the method in several provinces.

China is also well known for filtering out unwanted news from around the world. As protests rocked the Middle East and Occupy Wall Street spread across America, without the use of proxy servers, Chinese netizens were left in the dark on what was happening. In Uzbekistan, the Arab revolutions were also persona non grata, while in Kazakhstan blogging platform LiveJournal was blocked altogether.

The report also takes a look at an increasingly fragmented Web, due to organizations having to abide by local laws. Twitter caused an uproar when it announced its intention to censor content by location, a move which was publicly welcomed by the Thai government. For its part, Twitter explained that it had no choice but to abide by governmental laws.

Censorship by location is a practice we have also seen from Google, with all of details of takedowns shared in its Transparency Report. Google has, of course, gone to great pains to remind us all that it supports freedom of expression, up to a point.

Some entries which may come as a surprise include Australia and France, both of which have elaborate filtering systems in place. Under Australian law, authorities also have the right to suspend Internet access in order to prevent the downloading of copyrighted content.

While Pakistan is not on the list of the Enemies of the Internet, if it goes ahead with its plan to create an ‘Electronic Great Wall’, to filter and block Internet content, it could very well find itself added to the list next year.