This article was published on December 15, 2012

In addition, AskMeOut’s three co-founders have now confirmed they will spend their summer in Miami to develop their product – and therefore earn an additional $20k, sponsored by Knight Foundation and Tres Mares Group.

As a matter of fact, HackDay isn’t your average hackathon, and is aimed at building actual startups, while giving them incentives to stay in Miami.

“The primary goal behind the HackDay prize is that the winning team gets enough cash to dedicate itself to the project for the next 3 months and really attempt to turn the “hack” into a startup,” says Senzari‘s CEO and HackDay Foundation’s founder, Demian Bellumio.

As you may remember, the latest HackDay took place on December 8th-9th 2012 at The LAB Miami, a new 10,000 square foot work-learn space that raised $650k from Knight Foundation and local angels to support its operations, which will officially start in January.

After selecting five finalists among the 13 projects created over the weekend by 40 developers, HackDay gave them the opportunity to participate in some of the activities that Telefónica’s accelerator Wayra organized to help its teams prepare for its first Global Demo Day.

The partnership between HackDay and Wayra doesn’t stop here, and AskMeOut will also get a chance to get fast-tracked into Wayra’s application program if it decides to participate.

While AskMeOut is a cool iteration of the social dating concept, what’s really impressive are its co-founders Gustavo Braga, Anderson Ferminiano and Henrique Dubugras. Not only are they between 16 and 18 years old, but they have already created two other startups.

One of these startups is actually the original reason why they came to Florida, Miami-based Brazilian angel investor Marcelo Ballona explains:

“I am their mentor at EduqueMe, and I brought them here in Miami to pitch the startup at AVCC. I also encouraged them to participate in HackDay. They loved Miami, they want to spend the summer here to develop the company – and they will now have funds.”

The trio started attraction at HackDay from the very beginning, when Dubugras won an iPad Mini for scoring the highest Codility result – and was able to solve the Fibonacci problem that was provided with the test.

In addition, Ferminiano is the youngest PHP5 Zend certified engineer in Latin America, while Braga is currently an electrical engineering and computer science major at MIT – and also got admitted at Harvard, Princeton, Stanford and Yale.

Studying in the US was actually the theme of their two other ventures, EstudarNosEUA and the above-mentioned EduqueMe. EduqueMe’s concept is to find companies interested in sponsoring talented Latin American students willing to attend top US universities, in exchange for a chance their committment to work for their sponsors for a certain period of time after they graduate.

As for AskMeOut, its matchmaking engine helps users find potential dates within their existing social networks, while maintaining confidentiality. In practical terms, it pulls information from Facebook, gets users to chime in, and only unveils dating interest if it is mutual.

Although AskMeOut’s victory wasn’t a surprise for anyone who had crossed their path over the week, the team competing with other interesting projects, some of them from fairly seasoned entrepreneurs and coders.

This led the jury to attribute a special mention to INtroduced.co, a Raspberry Pi-powered project that its co-founder Tyler McIntyre describes as a real-time LinkedIn for conferences and events. HackDay’s sponsors also came up with last-minute awards for the runner-up, which will now get a free ticket to 500 Startups‘ next event, sponsored by .CO, as well as one-year free co-working space at The LAB Miami. 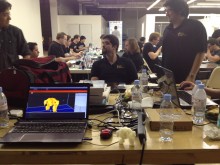 Here are the other three HackDay projects that pitched at AVCC:

Overall, HackDay certainly raised the bar when it comes to hackathons, and most of the presentations are little to envy to demo day-type startup pitches. It will now be interesting to see how many of them go on to become real, successful products.