In the personal connected camera market, Google-owned Dropcam is the company to beat with its well-designed hardware and premium cloud recording service. ArcSoft’s new Simplicam provides close competition with Dropcam through its Closeli recording service and advanced face detection technology, but it doesn’t quite  beat it. 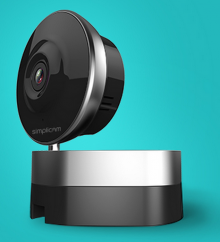 Originally announced earlier this year, Simplicam goes on sale today. ArcSoft isn’t a household name, but you may know it from its photography software, including Perfect365 and Panorama Maker. The company also has years of experience providing vision computing technology to companies like Samsung.

Setting up Simplicam on a mobile device is, well, simple. I downloaded the app, signed up for Closeli, and then typed in my WiFi password. The app then generated a QR code that I held in front of the camera to have it log onto my network.

The Simplicam costs $149.99, roughly the same as the entry-level Dropcam HD and $50 cheaper than the Dropcam Pro. The cloud service starts at $5 per month/$49 per year for 1-day recording. You can also pay extra for 11-day and 21-day recording plans.

The camera’s hardware itself is polished, but not quite as nice as the Dropcam Pro. I had issues with the hinge design, as it doesn’t extend to the obtuse angle that I need to keep an eye on my baby’s crib. I could use the included wall mount to get the right angle, but that doesn’t help when I travel with it. The ring-shaped stand feels unwieldy too. The camera tips over fairly easily if you haven’t secured it with a mount or some kind of fastener.

Image quality on the Simplicam is decent. Night vision worked well, and I was able to zoom in without too much blur. Video resolution goes up to 720p HD, which is on-par with other similarly-priced cameras.

You can watch Simplicam’s live feed for free, but you’ll have to upgrade to Closeli’s premium plan to store footage, set recording alerts, share clips and activate face tracking. Closeli’s UI isn’t as sleek as Dropcam’s, but it gets the job done with plenty of options for viewing past events and quickly sharing them.

Maybe I’m just too cheap, but it’s hard for me to get behind monitoring camera paid subscription services. After trying out Dropcam’s cloud service, I let my subscription lapse because I decided viewing alerts wasn’t worth the monthly fee. The Simplicam unit I tested came with a one-year subscription to Closeli, but even the face detection feature wouldn’t convince me to pay for the service.

Still, I recognize that plenty of customers are willing to pay for these types of cloud video services. Closeli offers a more affordable alternative to Dropcam, which starts at $9.95 per month/$99.00 per year.

When I asked ArcSoft what the difference is between Closeli’s face detection feature and Dropcam’s people detection, Product Marketing Director Caroline Tien-Spalding said that Closeli uses imaging technology to examine faces, compared to Dropcam’s algorithms based on movement.

That doesn’t appear to make much of a difference now, though, down the road, it might be helpful to have a camera that can identify which of your family members is in the room. Of course, having your baby and/or security camera recognize your face would also add extremely creepy privacy concerns to the mix.

After testing the Simplicam for the past few days, I can’t recommend it completely over Dropcam, but it is a promising alternative. The main advantage Simplicam has is that its cloud service cheapest plan starts at $5 a month for 24 hours of storage, compared to Dropcam’s $10 fee for 7 days.