Appsfire has rolled out a not-insignificant update to its iOS app today (Android coming soon), which includes badges for the best/worst apps, a new side menu and a handful of new design tweaks.

Just a couple of week ago we reported that Appsfire has helped 9 million people with more than 1.5 billion mobile app recommendations to date. And while there’s no shortage of app-recommendation apps, Appsfire is one that has always stood out. With millions of apps across Apple’s App Store and Google Play, it can be difficult knowing what’s hot and what’s not, which is where Appsfire comes into play.

Perhaps the biggest update in version 4.1 is badges…designed to let users spot the best apps and developers.

The idea here is that you can quickly see if you if an app stems from a top, reputable developer, or if an app is already a bestseller. But badges aren’t just about helping you find the best apps, they will also alert you to ones you should be wary of. 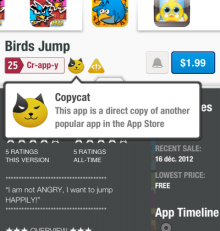 Apps that have simply ripped off something else in the App Store will be given its own little badge indicating just that.

Furthermore, there is also a badge that indicates suspicious activity, whereby an app may be using underhand tactics to get itself up the App charts.

What sort of activity could this entail? Well, bribery, for starters:

In addition to badges, Appsfire has also included a handful of new design tweaks, including a side menu to navigate through the app. And it also includes more information about apps, such as whether the app has in-app purchases, a Game Center and when the app first landed in the App Store.

The company, co-founded by Ouriel Ohayon and Yann Lechelle, had a pretty busy 2012, rolling out a Pagerank for apps service, as well as acquiring and relaunching iPhone, iPad and Mac application performance-tracking service Appstatics. It also launched a new Timeline feature, which allows its app-users to look backwards across the history of an app to see updates, launch dates and promotions. The French startup ended 2012 with a rebuilt, blazing fast iOS app update.

“We’re trying to bring more transparency to the App Store so users can download great apps by understanding what they are going to download before they download it,” says co-founder Ouriel Ohayon.

While the new features are for its iOS app only, Android will be included shortly.