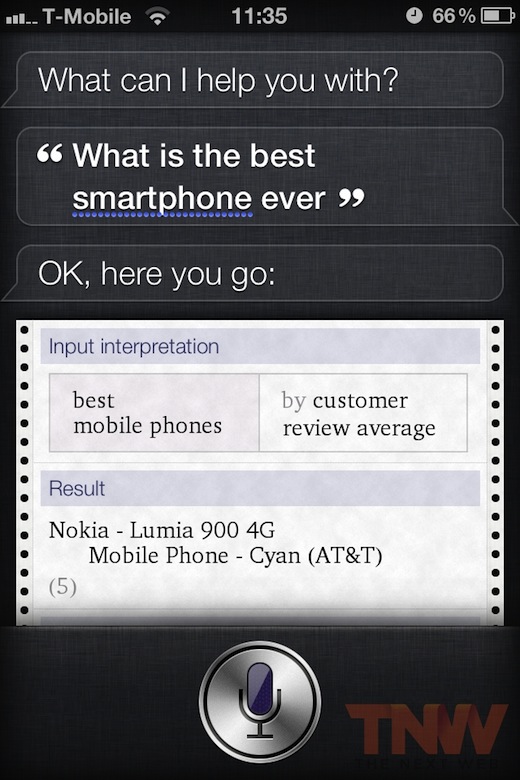 When you break out your iPhone 4S and ask Siri what the ‘best smartphone ever’ is, your humble virtual assistant will recommend you to buy Nokia’s Lumia 900.

Which is, of course, a decent phone indeed.

But really, an iPhone 4S-only service prompting you to check out a rival device when you ask it what the best handset is?

Siri’s amusing recommendation is drawing comments from hosts of Nokia and Microsoft fans worldwide (yes, there are still many of them), which in itself is rather amusing. It’s kinda like watching people cheer because the magical mirror told the queen that Snow White is actually the fairest of them all.

Hopefully needless to say, the reason why Siri is making the above recommendation isn’t because Apple thinks the iPhone 4S is subpar (as if).

It’s simply because Siri bases its answer to that particular question on results from Wolfram Alpha, which itself draws from users reviews Web-wide.

User satisfaction rates for the Lumia 900 in the United States happen to be very high, hence why WA will tell you that it’s the ‘best smartphone ever’.

Our recommendation is: give both the iPhone 4S and the Nokia Lumia 900 a whirl and decide for your damn self instead of asking Siri.