With over $110 billion in cash, the Cupertino giant could theoretically buy three major rivals and still have change left to go shopping for a new handbag or two.

We know that’s not how it actually works, but it helps to put the size of Apple’s gargantuan amount of cash into some perspective.

Apple could (again, theoretically) pick up all of Amazon, Nokia and Research In Motion with its mountain of cash, looking at current market capitalizations.

That totals roughly $107 billion, still $3 billion short of the cash Apple currently has on hand (its market cap is roughly $522 billion). How mind-blowing is that?

Wait a few days, and maybe they’ll be able to bail out Netflix while they’re at it, too. 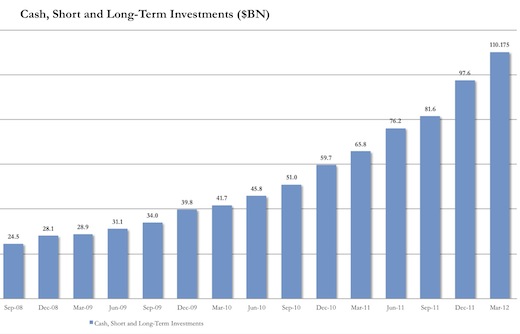