Of all the toys in my office, my guitars have to be my favorite. Though the nagging problem that I’ve had with my electric is that, if I don’t want to sit in my office then I’m pretty limited in what sounds the instrument can make. I could carry an amp with me around the house, but Apogee’s Jam lets me plug my guitar into my Mac, iPhone or iPad and use something like Garage Band to play, record and edit my sounds.

First off, if you’re an Apple user and you’re not familiar with Apogee then you need to be. The company has been making top-shelf audio gear for years, and has earned a reputation not only for its aesthetics but mainly for creating prosumer-level equipment that rivals the stuff in high-end studios.

The Jam is an audio interface, but instead of offering a wealth of interconnects like the company’s Duet or Quartet, it includes only a single instrument-level input that’s ideally suited for guitars. Of course, being that it is so focused on one task, it’s priced accordingly — The Jam will set you back only $100, whereas the Duet 2 is $600 and the Quartet clocks in with a healthy $1300 tag. 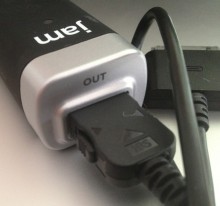 But I guess it’s a bit disingenuous to say that the Jam only does single-duty. While true, the fact is that it also does something that the Duet and Quartet can’t – it works with your iPhone or iPad as well as your computer. This is accomplished by the use of a plug on the output side which lets you change connections.

There are two included cables, both measuring in at 0.5 meters in length. One is a standard USB for using the Jam with your Mac. The other includes a 30-pin Apple connector with locking tabs to hold it securely in place. Apogee also offers 3-meter versions, for an additional $20 per cable.

The Jam is designed to work with Garage Band, but it’s compatible with a number of other audio programs as well. There’s a full listing on the Apogee site, but some of the highlights include iRecorder, Voice Memos, iMovie and most interestingly AmpliTube.

I say that it’s the most interesting because it’s also probably Jam’s biggest competition. While Garage Band does an admirable job of emulating amplifier, head and pedal setups, AmpliTube has official licensing with some of the biggest names in the guitar world, including Orange, Fender and Seymour Duncan. But the company also makes the bargain-priced iRig, which accomplishes many of the same tasks as the Jam, though it doesn’t nearly hold up in the audio quality department in my opinion.

That brings us to sound. My setup includes a 24-channel mixer, a professional-grade USB audio interface and top-end studio monitors. I’ve been doing live and studio recording, as well as mastering and audio production for nearly 20 years as a hobby. While I typically run my guitar through my board to interface it with Garage Band, I was blown away by the audio quality that the Jam manages to produce.

For $99 the Jam would be an absolute steal if it only worked with your Mac. But given that I can easily switch out the interface cable and plug it into my iPhone or iPad, it seems like a near-impossible price point for the quality of audio that it produces. While I have extensive experience with audio gear, I’m not that great of a guitarist. But Peter Frampton is, so check out this recording that he did with the Jam as part of a demo of the gear:

For the traveling musician, the Jam is small enough and light enough to throw into a gig back or road case without ever noticing that you’re carrying it. Being able to plug the device into your laptop, iPhone or iPad, then play and record without anyone else hearing is a treat. Though there’s one caveat — A bug in the system will cause the Jam to lose recognition if you plug in your headphones last. So plug them in first, then plug in the Jam and start up Garage Band. You can shred to your heart’s content without anyone else being the wiser.

If you’re a guitarist, or you have one on your gift list, the Jam is an absolute must-buy. Though be forewarned that Apogee gear works only with Apple products, but we all know that true music players use Apple anyway ;)