It’s been a year-and-a-half since we first described the Israeli startup as the only productivity Android app you’ll ever need. At the time, Any.DO was only available for Android, but it later landed on iOS, with a Chrome extension launching simultaneously to help users sync their to-do lists across multiple platforms. 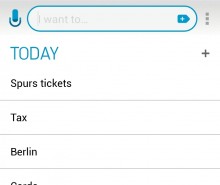 Any.DO has thus far been angel-funded to the tune of $1 million since its inception back in 2011. This latest investment is particularly large for a “seed” round, and is probably more in line with the typical figure you’d see for a Series A round, but this is testament to the uptake Any.DO is seeing around the world.

“In the past few months we’ve seen a lot of activity in the personal productivity space, and we are thrilled to have such an amazing group of people who believe in our vision and want to help us turn it into a reality,” says Omer Perchik, Any.DO’s founder and CEO.

“We are looking forward to continue simplifying people’s lives by bringing beautiful design and deep data analysis to the core apps that people use each and every day,” he continues.

There’s no shortage of productivity-enhancing to-do list apps out there including Clear and Wunderlist, the latter of which is probably about as cross-platform as you’ll see. But Any.DO has been building a solid fan-base over the past couple of years based primarily on its clean, easy-to-use iOS and Android apps.

Back in October, Any.DO also updated its Chrome app to let users create to-do lists directly from Gmail. Any.DO is also currently in the process of developing a Web-based HTML5 version of its app, though it has been in the works for a while already and there’s no update yet on when this will come to fruition.

Earlier this year, the company introduced Any.DO Moment for iOS and Android, a feature which serves as a daily planner that helps users manage their most pressing tasks and deadlines in a single screen.

Now, with a fresh $3.5M in the bag, Perchik tells us they’re looking to “supercharge the company’s growth,” building on its current team of 12 and growing its office in San Francisco.