Rovio, the Finnish game studio behind the hit Angry Birds series of mobile and Web games and a range of other digital content, has just announced its financial results for the full calendar year of 2012.

In 2012, Rovio booked sales of €152.2 million or $195 million, up from €75.6 million ($96.9 million) in revenue the year before, a 101% jump. Its main revenue sources remain paid games, virtual goods and advertising, although merchandising is closing in and might even make up the bulk of Rovio’s revenue in the future.

Here’s the gist as far as Rovio’s finances go: 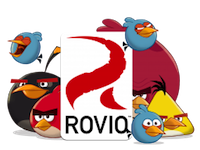 “Year 2012 was another record-breaking year for Rovio. We doubled our revenue with an EBIT margin of 50%, more than doubled our headcount, established new offices and a New Business Ventures unit.

Also, to protect our own, as well as our partners’ and our fans’ interests, we continue to invest heavily in brand protection globally.”

We’re not quite sure what that last statement means, exactly, but my guess is we’ll soon find out (it’s in there for a reason I daresay).

2012 was a fantastic year for us, thank you to everyone who joined us for the ride. rov.io/10y9jnT

The company ended last year on a high note as well, hitting a total of active monthly users across all platforms of 263 million in December, 2012.

Rovio says its ‘Consumer Products’ (merchandising) business unit’s revenue for 2012 was more than three times the revenue of 2011, and accounted for 45 percent of the company’s overall revenue.

If you’re interested in learning more about the company, its origins and strategy, you’re invited to read my profile on Rovio.