You might not often think about an ancient tradition like the Olympics Games in one sentence together with Twitter and Facebook, but that’s something that’s constantly on the mind of Alex Huot, the International Olympic Committee‘s (IOC) Head of Social Media, who will be speaking at The Next Web Conference this month.

Alex has been the Head of Social Media since January 2009, but has been a member of the Olympic communications team since 2000. His passion for technology started a lot earlier, when he got his first computer — a Commodore VIC-20 — at the age of 12.

Since taking on the social media role, he’s been focused on connecting with a younger audience, and in the lead up to the 2012 Games in London, Alex and his team have been busy preparing for a hectic 17 days.

Initiatives include creating an Athletes’ Hub where fans can connect directly with Olympic athletes, as well as the campaign, I Copy U, offering visitors the chance to win a trip to the 2012 Olympic Games in London.

Although the Olympics last just over 2 weeks, the Social Media team has a year-long challenge of engaging with fans, finding out what they want to see and hear, and making sure they get it. In the lead up to the games, we managed to catch up with Alex to find out what’s in store for the Olympics on Facebook, Twitter and beyond. 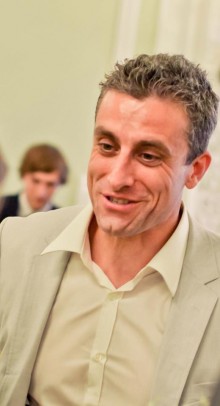 The Next Web: Can you tell us a bit about yourself and how you came to be the Head of Social Media for the IOC?

Alex Huot (pictured right):  I’ve worked in different areas including some startups in Switzerland, and then I got into communications here at the IOC, in 2008, and ran the website for a long time. The IOC felt that it wanted to connect with a younger audience. In 2009, Mark Adams, the Communications Director joined the team, and he created the position of Head of Social Media, and naturally with my experience in the digital space, I got onto that and began to build communities for the IOC, and engaging young people.

We launched a Facebook page at the end of January 2010, and in two weeks we picked up a million fans. Through Facebook insights, you can get a good feeling of the age, and we saw that well over 65% were under the age of 24.

TNW: So how has the landscape shifted, going from a more traditional website to social media?

AH: There are different ways of engaging. What I see clearly is that when you have a site like Twitter or Facebook with thousands of engineers, their platforms and features evolve quicker than a traditional website. So what’s happening now is how we integrate within these platforms. There are still mandates that a corporate website or portal can have that are different. So how it’s shifted is that we’re integrating and building new layers of engagement through applications for example. It’s a way to drive traffic as well. So I think they both still have their place.

TNW: Which platform gives you the best reach?

AH: Facebook is what went viral first. Our Twitter account went up to about 13,000 followers during the Vancouver Games. What we’re seeing right now is a massive growth on Twitter, on the head of London. The Twitter strategy has evolved in how we’re using it, where we begin to create different accounts.

So for example, we have the @Olympics account, which has picked up 10,000 followers in the past 24 hours, and it’s just exponential. It keeps growing.

We also have an account in Russian which is growing, @Olympic, so we’re speaking different languages. What’s evolved from Vancouver is that we want to speak as many languages as possible. We’re speaking in English, French, Portuguese, Russian, we’re also engaging in China, where our account is really taking off.

With all of our microblog accounts we’ve got about 6.5 million followers. On Facebook, we’ve also got different accounts, some are more active than others. But the Olympic Games page has 2.6 million fans, the Vancouver page picked up 1.3 million. We’re at about 4.9 million fans on Facebook, and have about 11 million fans between Facebook, Twitter and Sina Weibo. The biggest growth is in microblogging.

We’re also engaging on Youku, and YouTube for archive video. People are getting really excited about the games in London.

TNW: What’s your take on Facebook’s timeline and how it’s been working out for the IOC?

AH: Before, with the galleries it wasn’t very clear. It was harder to organize and get people to discover the content. In the sense that we’re an event that happens over time, it really works well for us. I’m able to showcase photos, I’m able to pin larger photos on the Timeline.

In terms of managing the experience it’s much richer than what it was before. And also in terms of space — if you look at the banner, we’re able to have a much bigger visibility in terms of photos. Timeline and photos work really well and the Olympics is a massive photo event.

AH: I did a post the other day, on Facebook, asking the fans, “Who are you going to cheer for during the Games?”, and I did the same thing on Twitter. It’s important to see what people are saying, and how we’re doing that is through tag clouds. Looking at the comments that are coming up, the communities are similar in what they want to cheer for.

Concretely in terms of engagement, a few months ago we would generate a comment every 10 seconds. Now at peak times we could be hitting 4 comments a second. The kind of engagement we’re seeing there is that it’s really in people’s hearts and minds. They want to engage with it and they have something to say, more so than a few months ago.

The strategy we have in place is to find out what people want more – and that’s obviously access to the athletes, hearing from the athletes. So we’re working on trying to facilitate that. We’re trying tunderstand what they want and by analyzing their comments, we’re better able to serve them, and provide them with content they might want to engage with.

TNW: Can you give us an idea of what kind of content you’ll be sharing during the Games?

AH:  We have a lot of things to say and share, but we really want to have a type of platform where our fans can connect with their favourite athletes. We’ve begun to identify and connect with athletes, verify them, and add them to the Athletes’ Hub.

We’re building that out as athletes qualify for London, you’ll be able to go there, and find out which athletes are using social media and how you can follow them and engage with them. It’s a directory of sorts, not just for London but it goes beyond London because for us, we feel like every day is like the Olympics.

The 17 days are really the celebration of the sport, but the stories and the efforts and athletes’ achievements happen everyday. So we’re providing a service by connecting our fans to the athletes right now, or even when the games are over, or as they’re preparing for the Winter Games in Sochi in 2014.

We also want to reward fans for doing certain things. Next week we’re going to launch a new rewards system on the Athletes’ Hub, which is going to be linked around tips. So we’ve been interviewing famous legends of the Olympics games, asking them things like, ‘How did you get that perfect score?’ or ‘What can you share with our fans or other aspiring athletes?’.

It could also include chats with the athletes from the Olympic Village — these are things that have never been done before.

We also want to give a behind the scenes look at the Games. From the editorial side, we think there’s an interest for people to see, what kind of things are the atheletes eating? Do athletes do their laundry? What do they think about certain things? It’s about giving a behind the scenes view of the venues – what the athletes are doing, what the volunteers are doing and what the fans think. Giving the fans voice is just as important as giving the athletes voice as well. So we want to make sure that they get their say.

We’ve got a lot of love to give the fans and want to give that during the Games.

TNW: Can you describe of ‘A typical day in the life of’ in terms of the Olympic social media team?

AH: It really depends on the time. The first Games I did were in Atlanta in 1996 – they’re all different, and they’ve all changed from a communication standpoint. It’s a little bit hard to say what London’s going to be like, but the one thing that stays a constant is, as we move forward, there’s an editorial plan in place, but we’re also extremely organic. We ask a lot of questions – what do you like? What do you want to see and hear? Who do you want to connect with?

If we were to talk about Twitter – we tweet as much as you eat. We’ll do it two or three times a day, but as we get into the games, people want as much of the interesting stuff as possible. So it’s going to be a free flowing feed, but not tweeting just for tweeting, but tweeting interesting stuff. And on Facebook we’ll be rolling out some apps.

We’re helping sports federations as well, and obviously the Organizing Committee for London 2012, and the fans. So we’re kind of touching all the key stakeholders that we have and delivering content, so we’re super busy but having a lot of fun.

TNW: Will you be using other platforms such as Google+ or Instagram?

AH: The core of the strategy when we launched was the YouTwitFace Strategy and Flickr. We’re using Flickr as a way to distribute photos to the press, and we can integrate Flickr galleries really nicely into Twitter. I can’t go into too much detail but we are talking to two other platforms as well.

If you were to compare London and Vancouver ahead of time — Vancouver was the inital step in engaging in social media to connect. We’re going to see a much deeper, much richer experience around various platforms, above and beyond YouTube, Twitter and Facebook.

TNW: Anything else you want to add?

AH:I think that London 2012 will be the first social media olympics, it will be remembered for that. It will increase awareness and we’ll see a legacy of more young people connecting and engaging with us even when the games are over.

Alex Huot will be speaking at The Next Web Conference 2012 in Amsterdam, which takes place on 26-27 April. Book your ticket today, and we’ll see you there!