When the Apple PR person showed me to my seat at the iPad 2.0 launch, she reminded me that if I wanted to take photos I’d need to sit in the back section. I instead chose the front row, despite every journalistic bone in my body screaming at me to go take the photo position.

Because I had this sense that this was one of the last performances of Steve Jobs that I’d be able to view, and I wanted to just study him up close. It’s one of the few times when I was forced to just soak in a performance, and not try to capture the event I was viewing. Jobs didn’t disappoint.

For understanding just why you’ve got to go back through my entire life. When I was in Junior High, as a 12-year-old, I helped unbox the first Apple IIs that Hyde Jr. High in Cupertino bought. Seeing that green screen, cassette tape drive, and tan plastic case with the pop-off lid started a relationship with Apple that would ebb and flow for the next 34 years. That year, enamored as I was with this new device that my school had purchased (my dad bought an even better model a few months later) I got the courage to go into Apple’s first building (back then it was only one building, smaller than many of the startups I visit today) and ask for a tour. A guy gave me a tour, I have no idea who he was, but I still remember two things 34 years later: the piano and the sign “loose lips sink ships.” I got some posters, which are long gone, of Apple’s first multi-colored logo.

It hit me that this was a different kind of company, very different from Tandem, which I also got a tour of (that company is now gone) and HP, where I worked a summer job on a wave soldiering machine.

Apple was part of my life at every turn. When I was 13-14 I earned my allowance by helping my mom stuff Apple II motherboards. I was paid $1 per board, if I remember right, and it took me a long time to do one properly. I learned later from Wozniak that Apple had run out of manufacturing capabilities, since Apple IIs were selling so well, and had hired Hildy Licht, who hired housewives around the valley to help build them.

At Prospect High School they had a brand new Apple II-based lab. I joined the computer club there, where we, um, ran a software piracy operation. Dads like mine would buy the latest games and one of the members of the club was so adept at hacking that he’d crack the copy protection codes, and put a copy in the school’s library. I liked playing the games, other people liked learning to code them.

At West Valley Community College, the journalism instructor there had somehow gotten the budget to buy a $5,000 Laser Printer and a few early Macintosh’s to run the newspaper. When I met Steve Wozniak, back in 1989, I asked him for my first celebrity interview and later asked him for some better equipment for our lab. Got both, which really kicked my career into where it is today. I still have Wozniak’s home phone number memorized, which is strange because I haven’t called it in about a decade.

But all that is to say that Apple, the company, has been part of my life for the past 34 years.

That brings me to Steve Jobs and his introduction that day of the Apple iPad 2. I was watching a master at work and he didn’t disappoint. Hitting all his lines perfectly, selling the way only he could, and getting me to believe once again that my life would somehow better with one of these devices as part of it.

Why him? I asked myself that day.

For the answer to that you need to dive back through the past 34 years but for me it comes down to this: only one guy in the industry has ever told me to look at the back of a product to understand its beauty.

It was at the iMac launch where he was showing off the modern line that is on my desk today “look at the metal on the back, isn’t it beautiful?” he told me. It was.

But all the other CEOs didn’t care about the back of their products. They cared, instead, about shaving cost from them instead.

This wasn’t the first time I’ve witnessed Steve Jobs attention to stuff that doesn’t matter, either. When I interviewed Jamis MacNiven, who today runs a famous Silicon Valley hangout/restaurant named “Bucks,” he brought up Steve Jobs. He was Steve Jobs’ first contractor and he told me that he and Steve used to have long, drawn-out fights about seemingly inconsequential things should be done. “We’d fight over the way wires should be stapled in the garage,” he told me.

Another story I remember hearing was that Jobs had the factory floor of the Macintosh painted yellow. After all, the story went, such a beautiful product should be manufactured in a place of beauty.

When I visited China two years ago I got a chance to visit an Apple product line. The guy who ran it swore me to secrecy (his contract would be cancelled if it ever got out that he let a journalist see inside) but inside this factory several computer brands were put together side-by-side. “Look at the Apple line,” he told me. I did, and noticed that it had more steps, and better equipment, than the others.

When I visited Seagate’s factory where they manufacture 1.1 million hard drives a week for notebooks, one line was getting tested more often and longer. The line? The labels at the end said “Apple.”

It is this influence of Steve Jobs throughout the company that I keep hearing about. Even press releases, I hear, go through a horrendous process to make sure they are perfect.

Love him or hate him That actually explains why some people don’t like Steve Jobs. He is a dictator and is going to make sure you do things his way: i.e. to completion. When you pitch him an idea you better bring it in the box, and with the marketing you’ll use to sell it. You better have thought through everything. My brother-in-law worked at Apple and he has tons of stories about how Apple makes sure its suppliers give them the best equipment.

But, this story isn’t about Apple, really, it’s about a man. Steve Jobs. One that wears black turtleneck shirts and jeans. One that you could recognize in any restaurant or street corner in the world (I met him in a sushi place once back when I worked for Microsoft where we met his iconic personality. “Nice to meet the folks copying us,” he said. We were so star struck none of us even remembered to pull out a camera.)

He has inspired so many entrepreneurs to start companies and built stunning products themselves. More than one CEO has told me “I just want to build a product worthy of Steve Jobs approval.”

Heck, at least one such CEO even got a chance to pitch their product to Steve Jobs. I still remember how excited Mike McCue, Flipboard’s Founder and CEO, was that Steve loved his product. This was from a guy who had already sold a company for $800 million and usually he is calm and collected. Not that Sunday.

When I worked for Microsoft and met Dan’l Lewin, who now is a corporate vice president, he used to tell me fun stories of working with Steve Jobs (they started NeXT together). One story stood out about “the reality distortion field.” He told me how Jobs could sell anything to anyone and how he talked IBM out of hundreds of millions of dollars to fund NeXT. One question does need to be taken on: what will Apple be like without Steve Jobs?

I think you need to break up Apple into its parts:

None of these are changed one bit by Steve Jobs leaving. Why? Because Apple now has a culture of “what would Steve Jobs do?” They know that they better not ship products before they are ready. They watched the HP/Palm team blow up because they shipped too soon and announced even sooner.

They know that they better nail all the rest of it if they want to have a chance to compete with the Chinese, who have huge cost advantages when manufacturing things are starting to figure out how to market to world-wide audiences.

They know they better take risks and change entire industries (I won’t be shocked if they totally change the TV market this fall, in the same way that they’ve remade the phone market and the tablet market and the personal computer market in the past 10 years).

They know they better continue making products that are ahead of the rest of the market or else they will go out of business.

But, Steve Jobs will probably not be available to be the main pitch guy anymore. THAT will be a huge loss, because if they are trying to sell us on something new it just won’t be as easy for us to get interested in that new idea. Apple might again appear like it’s stumbling, or, simply, the same as every other company, and THAT is something for new CEO Tim Cook to stay up at night worrying about.

For me, though, it all came full circle when I saw Steve Jobs launching the iPad 2. Here was a guy, doing what he is uniquely qualified for, and I just sat back in awe. After the performance I went up to Steve, snuck by Katie Cotton, his head of PR, and shook his hand and said “thank you for everything you’ve done for all of us.”

It was my way of saying I respect Steve and I’m glad I sat in the front row, because if I had done the photography thing there’s no way I could have gotten up there to shake his hand before he was whisked out of a side door.

I wish you all the best Steve and hope you continue to find great joy in everything you do.

Our Coverage:
As it Happened | Steve Jobs’ Resignation Letter | Apple Fans’ Predictions |
Who is CEO Tim Cook? | Why Apple will continue to dominate |
Woz On Jobs: Greatest Leader Of Our Time | Steve Jobs: 35 years in technology |
Jobs will remain involved | Apple’s CEOs: From 1977 to 2011 |
A front row seat to Steve Jobs’ career, by Robert Scoble. |
Apple’s new organisational chart | 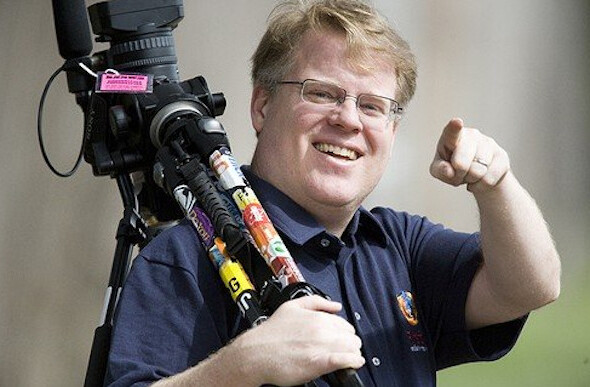 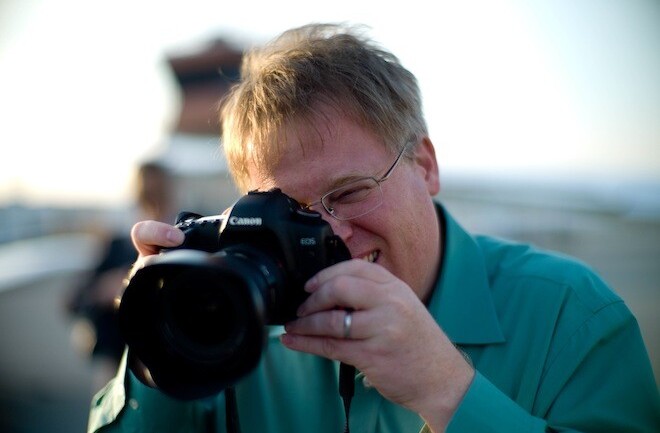