“The credit belongs to the man who is actually in the arena, whose face is marred by dust and sweat and blood; who strives valiantly; who errs, who comes short again and again, because there is no effort without error and shortcoming…” – Theodore Roosevelt

Well, sorry to break it to you, but you’re actually just getting started. Yes, you’ve done well so far. You’re in the 1% of startups that actually raise money every year. However, the interwebs are littered with numerous cool startups that raised a ton of money and never make it to the Promised Land (did someone say Friendster? Webvan? Pets.com?).

So what should you do now that you’ve raised that elusive funding round? Well, here are seven things I wished someone had told me once we closed our $1.9M seed round for last October. 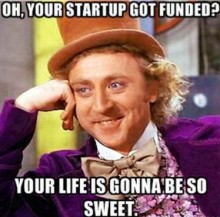 A startup is like a sick baby. It requires all your care, all the time, and if you do that, there’s a non-zero probability it will grow up to be a strong company; however, unfortunately, it’s still much more likely that it won’t make it through the night. Slightly morbid – Yes. Very true – Yes.

Often, entrepreneurs make funding seem like the end all and be all of their startup journey (“If only I could raise funding, I could then hire the perfect team and make the perfect product.”). Putting funding on such a high pedestal causes your mind to singularly focus on achieving funding as the final milestone,   and once you do so, you assume you’ve achieved your end goal. However, this is counterproductive to your actual end goal – building a great company.

Yes, you should most definitely take a moment to celebrate your funding. It’s an important milestone in your journey towards creating the next Facebook; but at the end of the day, that’s just what it is – a milestone. Recognize that and focus on what you need to do next. Things are going to get a lot harder, before they get easier. You’re just getting started. Here are two easy ways to maintain your focus:

This is quite possibly the single most important rule in building out a startup. Seriously, the most important thing you can possibly do is make sure your startup has the right people on board. Hiring slow doesn’t mean having a long drawn out hiring process, but rather taking the time to find the right person. While this is important in any organization, this is absolutely critical in a startup because each hiring decision is amplified throughout the startup. Think about it – if you’re a 6 person startup and 1 person isn’t pulling their weight, well 16% of your organization now sucks, and that 16% is enough to crush your startup.

However, hiring well isn’t as easy as it sounds. The inherent paradox of being a newly funded startup is that you’re competing for the same high quality talent as everybody else, with very little leverage to actually convince someone to join you, i.e. if the person you’re trying to hire is a good engineer they probably have multiple offers to join other “hot and proven” startups. So what should you do? Play to your strengths:

The most important hire you can make when you’re starting out (if you haven’t already done so), is to hire a good UX person. Startups today are separated by so little that a good UX really makes all the difference – especially when the space is crowded. A beautiful UX compels the user to keep using the app, to keep sharing the website and to keep evangelizing the product – for example, Path’s new UX redesign led to an 800% increase in users. If you’re unable to hire a high quality UX person initially, keep the following two questions in mind as you design your product and website:

Consequently, the first rule of design (which I had to learn the hard way) is “Don’t fall in love” – with your website, with the way your product looks and with the amount of work you put into getting the first iteration of the product up. Why? Because it will change significantly as your company grows. The same website that got you off the ground and got you funded might not be what your users actually need as the product evolves.

When we first got funded we built a website that screamed social validation (look at these cool quotes from The Next Web, Robert Scoble, TechCrunch etc.)

However, by doing so, we were clouding the user experience and it was really hard for a user to easily identify where to download the product. So we decided to change that and in April unleashed a newer, cleaner, more minimalist version of the site.

 The single focus when you come to the site now? Clicking the download button. And the reason we didn’t have to sell the user with social validation is because we realized (using Google Analytics) that most of the users that were coming to the site were directed there from articles they had read on sites like TNW – so they already had an idea about the product and they just wanted to download it.

Our job then was simple, we wanted to make that download process as easy as possible and wanted to reflect this in our website design. The result? This website redesign bumped our download conversion funnel by 3X, from 8% to 25%.

The best and the worst part of getting funding is that now everybody wants to be your friend and tell you how to run your product – VC’s, competitors, your best friends mom, everybody. While getting all this free advice, it’s important to remember that opinions are great to listen to, but keeping your focus is critical.

Focus on your one number – both internally and externally. At PowerInbox, our internal number is installs. That’s it. That’s what we track maniacally. That is the single number that tells us the state of our company. Our external number is engagement.

Traditionally, email has a 2-12% conversion rate; with PowerInbox we see a conversion rate of 20-30%. This increased engagement translates to increased interaction within your email. Instead of having to leave your inbox to buy those cool Warby Parker glasses, you can now do it with one click right in your email. That’s the number we share externally, because that’s the number that drives partnerships and keeps everybody happy (if you’re Amazon, and we can bump your email conversion from 12% to 20%; well now that’s 8% of additional revenue that goes directly to your bottom line). What’s your one number?

5 – Start talking the next round before you need it

This is a simple one – you have the most leverage when you don’t need funding and the least leverage when you actually do. This doesn’t mean that you start focusing on your next round as soon as you raise your first round – we all know how frothy paper valuations can be, but rather that you start having conversations about funding far before you need it. This will give you the most funding options when you actually need them.
  

Yup, everybody knows the importance of having a great product and focusing on getting your customers to love you but don’t forget the first people who took risks and believed in your word to join your company – create a culture that embraces and celebrates this.

This is incredibly hard, because it needs to permeate everything you do – from how you run meetings, to how you value personal and career growth in your startup, to what you stock your refrigerator with. Young startups have many different ways of doing this ranging from parking lot Insanity workouts (Klout) to mustache growing competitions (Mixpanel) to green dinosaur hoodies (Exec). Find out what makes your startup culture unique and embrace it.

7 – Be bold and enjoy the ride

The quote at the beginning of this post was taken from Teddy Roosevelt’s speech “Citizenship in a Republic”, delivered in Paris in 1910 and commonly referred to as “The Man in the Arena”, and it ends with “…who at the best knows in the end the triumph of high achievement, and who at the worst, if he fails, at least fails while daring greatly, so that his place shall never be with those cold and timid souls who neither know victory nor defeat.”