It is estimated around 1.5 trillion photos were taken over the course of 2015. Thanks to the proliferation of smart technology, imagery has grown to communicate so much that it can now be considered a universal language. Pictures are transcending language and cultural barriers to tell stories, evoke emotion and drive people to action. The age of digital perfection is dwindling and with social media and camera phones in virtually every pocket, we are becoming far more used to seeing a wide variety of aesthetics in the visual landscape.  It’s a tremendously exciting time, but one byproduct of this is that as people become more visually literate than ever before, it can be hard to stand out.

The rules are changing fast and it can be difficult to navigate the complexity of today’s consumers.  At Getty Images, our team of visual anthropologists analyze customer buying trends, advertising, social media, pop culture and billions of searches from Getty Images, to identify the next big trends in imagery. Here are the six bold new trends that you can expect to see drive visual communications in 2016.

Technology is having a huge impact not just on the images we see but also in the way we see ourselves. We’re becoming more self-aware, interconnected, and engaged with the world around us and each other.

Extended Human shows us how technology is enabling us to become more human – not less so. This trend shows tech in an optimistic light: driving positive change, connecting us like never before and enabling us to communicate, create, and share more intimately. It envisions a world where technology is not only embedded seamlessly into our bodies and lives, but also is something that we have a relationship with.

Oppenheimer Funds are a great example of this, highlighting modern relationships in a new-world way, in their ‘Invest in a beautiful world’ campaign.

Their image of a boy and his robotic dog shows that machines can expand our capacity to love and bond. The parameters of man and machine are starting to blur and the results are challenging conventional ideas of what it means to be human, and enhancing our ways of interacting with the world around us.

Consumers, are increasingly becoming truth-seekers, looking beneath the surface of a brand to establish a more meaningful connection. The desire to connect to something bigger than ourselves gives rise to mindful consumption. Divine Living taps into this, recognizing the multi-faceted modern-day meanings that can be found in the ‘divine’.

It mashes up concepts of the heavenly or spiritual with that of the deluxe, special or unique. We are starting to see this already, with Volvo and Hyundai both marrying luxury to the serenity and peace of sanctuary.

At Getty Images, searches for concepts such as ‘mindfulness’ have increased by just over 900 percent in 2015 with terms such as ‘integrity’ up by just under 1500 percent.

Celebrate the rebel. This trend embraces anyone on the edges – non-conformists, ‘oddballs’, anti-heroes, outcasts, activists and underdogs. People who push the envelope and break down stereotypes are being more readily spot lit, and those who speak up and stand out are rising above the digital fray.

The launch of the 2016 Pirelli calendar this year is a great example of this. The calendar has traditionally shown beautiful, air-brushed models in provocative poses. This year, however, they’ve stepped outside of the box, featuring women like Serena Williams, Patti Smith, and Amy Schumer who are iconoclasts, artists, and rule-breakers.

We will start to see more of the outsider heading campaigns as audiences expand and the ‘conventional’ falls behind.

Dripping, gritty, gooey, oozing, messy. Messthetics is the antithesis of a hyper-digital, air-brushed world.  It revels in the physicality of life; whether sensual, visceral, or just plain filthy, it highlights images of extreme imperfection and exuberant mistakes. These images give us a sense of freedom and release, allowing us to bask in glorious visual chaos.

Our desire for these visuals is driven by our need to disconnect from the digital field and truly engage our senses. Providing a shock to the eyes, Messthetics cuts through the noise and communicates with audiences on a super-sensory level.

A great example of this is Reebok’s “Be More Human” campaign, which shows athletes pushing themselves to their limits, and looking sweaty and grimy and covered with dirt. This trend evokes emotion and wakes us up from screen stupor. 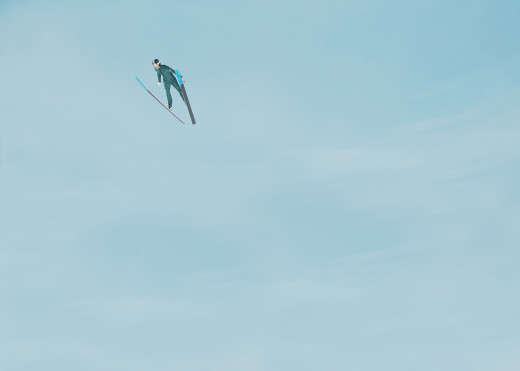 Greater interconnection often runs the risk of over-stimulation. As the world becomes more interconnected, we seek out moments of solitude and clarity.

Silence vs. Noise is about the art of restraint. It provides a platform for silence to speak volumes. Consisting of images which have small, bold elements against large expanses of space, it allows the contrast to do the talking. This trend can be seen as a visual opposite to Messthetics and also connects well to Divine Living.

REI’s recent #OptOutside campaign to resist Black Friday madness showcases explorers enjoying a bit of peace and quiet amongst huge stretches of nature, and the background takes up a good 90 percent of the design.

Imagery that is simple and minimalistic, enables a quick read, while being precisely executed to grab attention amid the clutter. Less is more.

Surreality takes the imagination and stretches it into the future. It showcases images that are highly imaginative or unexpected and uses a technological lens to visualize new worlds. The pictures are often weird and warped, and play upon ideas of replication, odd mash-ups, and askew retellings of older visual stories.

Think Banksy’s Dismaland, an alternative theme park with a dystopian flavor that aimed to challenge conventions of capitalism and offer visitors a twisted new point of view.

Or MTV’s “Tagline Here” commercial, which uses images that are bizarre and dreamlike, with odd juxtapositions and jarring visuals that seem to have bubbled up out of the Millennial collective unconscious.

This trend can tap into the fantasies of consumers to show them something different, and offer an alternative to the “authenticity” aesthetic that’s currently supersaturating the visual landscape thanks to mobile photography.

Surreality relishes the weird, the wondrous, and the ultra-creative, and so we predict that 2016 will see more of this playfulness and logic-defying artistry come to the fore.