The book on Jaiku has finally been closed. At least, as far as Google is concerned. Its founders are still undecided it seems.

What Made Jaiku Great 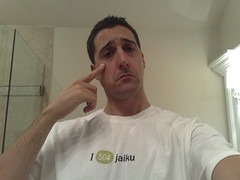 I was a big fan of Jaiku when it launched. Somehow it provided me with some great discussion and functionality I couldn’t immediately find on Twitter. I also got a chance to meet with some of the people behind Jaiku and found them to be extremely intelligent people with a passion for social networks. Jaiku has done something unique to microblogging and online social interaction that I think goes unnoticed for the standard Twitter user. To this day there are still things where I think Twitter could learn from Jaiku. Here’s four different ways Twitter, or developers focused on Twitter, can learn from Jaiku.

Commenting on tweets is just an @ away, but it’s far from perfect. When using an @ reply you are left out of other replies made by people you’re not following. You could use Twitter Search and try and find the whole conversation thread, but that could take you hours. Jaiku solved this with their comment system. Every Jaiku status message has it’s own comment page attached to it. To put it in the words of Jaiku founder Jyri: every status message is its own social object. Messages inside these threads weren’t constricted to 140 characters too. This allowed you to really get a meaningful debate going, as well as discover new interesting unfamiliar people popping up in these threads.

There’s a lot of folks on Twitter who know what a hashtag is, yet there’s still no good way of using them. For starters, you can’t click on a hashtag on the Twitter site. Jaiku had specific channels which you could join. You would be able to post a message using “#channel [your message]”, and new messages in the channel from others (even people you didn’t follow) would be posted in your stream immediately. As with comment threads, this was also very handy to discover new interesting people to follow. Clients like Tweetdeck have fixed this issue somewhat, yet there’s still no good solid concept of channels on Twitter.

Jaiku allowed you to automatically posts content from other social networks to your message stream. Like with Friendfeed, my Flickr pictures would pop up and people would comment on them right on Jaiku. People have used services like Twitterfeed to do this on Twitter for a while. However, I think it would be great if Twitter integrated this themselves. For starters, like on Jaiku, people could unsubscribe to certain automated content easily. Twitter could even make a filter for anybody who doesn’t want automated messages in their activity stream. Even if automated messages where just distinguishable from normal ones, it would be a step forward in my eyes. We want to put our other content on Twitter, so give us the tools to do this in a way that’s easy to organize and recognize. 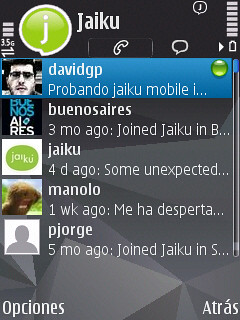 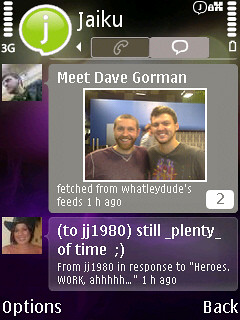 Jaiku’s mobile client integrated very nicely with the phones address book to show you exactly what you’re contacts have been up to and where. This allowed for some coincidental meetings which startups like Loopt and Dodgeball have been promoting all along. There’s a big opportunity to do this with Twitter, and add location to tweets at the same time. Some clients like Twinkle have already begun taking some steps in this direction, yet none have the same functionality as the Jaiku client.

Of course, Twitter is about simplicity. The Twitter team has always been very careful to add new features. However, Twitter is also just a platform. Anybody could make a great Twitter client with these kind of functionality, maybe using the open-source Jaiku code as a base. If you feel like giving this a try, let me know on Twitter. I’m @robertgaal.

I won’t be surprised if the ghost from Jaiku would haunt us Twitter users in the future. I’ll give it a warm welcome.