This article was published on December 25, 2012

The video of a scary elevator prank involving a little ghost girl has recently boomed on the Internet, and reached 50 million views in a few weeks. While the media didn’t insist on the fact that it was coming from Brazil, the nationality of ‘Catarina’ Migliorini was used as a selling point when this 20-year-old Brazilian girl decided to auction her virginity. 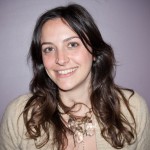 If you’re wondering what those two stories have in common, the answer is simple: Brazil can do virals. Yet, there is much more to the country’s Internet than promises of nudity and chills. To look back at a busy year in the crazy world of Brazilian online content, we enlisted the help of Bia Granja, who founded and curates Brazilian Internet culture portal and festival youPIX.

One of the most infamous news that came out of Brazil this year was the arrest of Google’s local director, Fabio Coelho, following the company’s decision to ignore a court order aimed at forcing it to remove a YouTube video about a political candidate. Coelho didn’t go to jail, but Google did comply and removed said video. However, it also used the opportunity to insist on its support for freedom of speech.

Freedom of speech and libel jurisprudence often clash in Brazil, in the lack of an appropriate legal frame. A major draft bill has been in the works for the past few months, but its voting has been delayed several times. Known as “Marco Civil da Internet,” or “Internet Civil Landmark,” it would clarify principles such as net neutrality, privacy and other online rights.

“The absence of a proper regulation such as a Marco Civil is the reason why we still see so many lawsuits,” Bia tells me. As a matter of fact, it is routine for viral content to face removal tentatives. For instance, the family of Nissim Ourfali has recently convinced a court to order Google to remove a famous video of their teenage son (though Google can still appeal).

As some of you may know, the video was initially meant to be shown at Nissim’s bar-mitzvah, and features him reluctantly and awkwardly lip-syncing to a custom cover of One Direction’s song ‘What Makes You Beautiful.’ The producers also decided to include some creative visual effects.

Despite the court ruling, it may be way too late for the Internet to ever forget Nissim, whose name is mentioned again and again in the lyrics of a song which has now been seen by millions, and reposted many times. If you are not a One Direction fan, you can also give a listen to its metal cover, as the video has become one of 2012’s top memes.

As we reported last January, Facebook has finally overtaken Google’s Orkut in Brazil, and is now the country’s leading social network – and sometimes its most visited site.

This change in leadership was confirmed in comScore’s latest study on social networking in Latin America, which pointed out that Orkut’s viewership declined by 62% year-on-year, while Facebook attracted 115.5 million Latin American visitors last November. “People may still have Orkut accounts, but they don’t really use it anymore,” Bia notes.

While some Brazilians are still wondering how to spell Facebook’s name, the network is affectionately known as “Face” – pronounced [Fay-cee], a word you’ll hear frequently in daily conversations. Not only has it gone mainstream, but it has also become a major source of viral content. 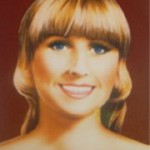 In addition to profiles, Brazilian users have been creating pages to spread new memes, such as Gina Indelicada (‘Indelicate Gina’), which attributes funny comments to a character lifted from the brand image of a traditional toothpick company.

However, Facebook also decided to remove a large number of pages that violated its terms of service, in what some called “the Facebook page apocalypse.” According to Bia, Facebook’s move served as a wake-up call in Brazil, where users realized that it’s not the new WordPress, and can’t be monetized in the same ways.

According to the above-mentioned comScore study, Tumblr has grown 86% year-on-year in Latin America. Chances are most of this growth comes from Brazil, which is now its second largest traffic source, and where the company has recently launched a local staff blog in Portuguese to capitalize on its existing popularity.

Unsurprisingly, this ongoing boom has generated many popular Tumblrs in 2012, such as the gif-based hit ‘Como eu me sinto quando…‘ (‘How I am feeling when…’). While it was inspired by another reaction-focused Tumblr now called ‘Lol, that’s me,’ it has managed to find its own sweet point, up to the point where it became Tumblr’s third most popular page worldwide.

Single-topic, meme-based Tumblrs are another trend, illustrated by ‘Nana Gouvêa em desastres,’ (‘Nana Gouvêa in disasters’), which mocks a

43% of Brazilian Internet users browse the Web while watching TV, the research firm IBOPE Nielsen Online revealed in its Social TV report. This isn’t only about stats, and this trend has been confirmed earlier this year, when the ‘telenovela’ Avenida Brasil became a very hot online topic.

As you may know, ‘telenovelas’ are the Brazilian equivalent for soap operas, and a huge cultural phenomenon that goes well beyond TV. Not only are fictional characters often mentioned in newspaper headlines as if they existed, but the most popular series are also trend-makers and influence the general agenda, as they become a source of public debate. 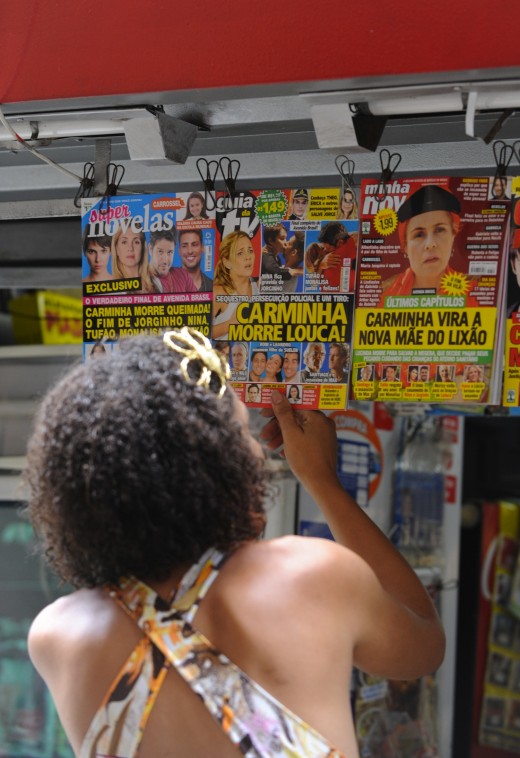 In this context, and considering the growing penetration of Internet and ubiquity of mobile phones in the country, it wasn’t very surprising but still pretty impressive to see how “Avenida Brasil” was followed and debated on social networks such as Facebook, Instagram, Tumblr and Tumblr:

“No ‘telenovela’ ever had such a large impact on the Internet,” Bia says. “I have never really watched ‘telenovelas,’ but I started to follow this one online – I was getting updates on what was happening in the show every second. References and jokes related to the show and its characters usually ended up topping Twitter’s Trending Topics in Brazil on a daily basis during broadcast.”

This is obviously good news for Twitter, which has recently launched operations in Brazil to partner with local advertisers.

The Internet is also becoming the first destination of original Brazilian content. “Brazil has matured in that respect, and some blogs and channels have started to produce Internet-only quality programming,” youPIX reported last year.

In 2012, some of these became massive online hits, such as fast-growing Parafernalha. It was co-created by star vlogger Felipe Neto, whose personal channel ‘Nao faz sentido’ became the first Brazilian YouTube account to reach one million subscribers last August.

As for the hilarious channel Porta dos Fundos, it managed to gain both huge popularity and critical acclaim, won an award for being the “best TV comedy show” – despite the fact that it is only available on the Web.

The background of Porta dos Fundos’ founders is definitely an interesting mix, and includes traditional TV, online humor and stand-up comedy (if you speak Portuguese, you can check out one of their best viral videos here). As a new online production company, it has already managed to get on the radar of larger players; after one of its spoof videos about food chain Spoleto went viral, the brand was clever enough to ask the team to create an ad in the same vein.

However, Brazilian viewers are increasingly wary of advertising disguised as viral videos, and Nokia’s campaign ‘Perdi meu amor na balada’ left many with a sour taste once it was revealed that this cute and intriguing story was actually made to promote the brand’s latest smartphone.

It also irked Brazil’s ad regulation authority, Conar, which is asking for clearer frontiers between content and advertising to make sure users aren’t being misguided. This applies to viral campaigns such as Nokia’s, but also to fashion bloggers, who are increasingly being summoned to disclose paid posts, and heavily criticized when they don’t.

Internet as an empowerment tool

Brazilian users have become so suspicious of viral campaigns that many initially thought that the fast-spreading story of a super-handsome beggar photographed in the streets of Curitiba was fake. Unfortunately, it was soon confirmed that his name was Rafael Nunes and that this former model had indeed become homeless due to his drug addiction.

Interestingly, Global Voices reports that it turned into an online debate:

“The debate on Rafael’s case has grown into a racism-oriented discussion about how Brazilian society only reacts with indignation to situations of social exclusion when those affected are white and ‘European-looking’.

Although Brazilians are one of the most racially diverse societies in the world, the top of the country’s social economic pyramid is still widely occupied by white Brazilians and most social indicators connected to education, access to health-care and employment overwhelmingly privilege this group,” Melissa Rossi writes.

Earlier this year, Brazil’s privileged class had already been somewhat teased with the meme ‘Luiza do Canada.’ It all started with a real estate commercial featuring a complete bourgeois family – except for their daughter Luiza, “who is in Canada.”

The father’s bragging didn’t go unnoticed, and quickly became a running gag, turning said Luiza into a micro-celebrity when she finally returned from Canada.

While this was only light social satire, politics also gained full online presence in 2012, which was an election year in Brazil. While the official campaign was still far from digital-first, young Internet users took ownership of the topic – and added some ‘Lulz.’

On a more serious note, thirteen-year-old student Isadora Faber became international news for creating the very popular Facebook page “Diario de Classe: A Verdade” (“School Diary: The Truth”) where she exposed the conditions of her school.

Unfortunately, she also made enemies, and had to go to the police office when some of her teachers complained about her comments. More recently, someone threw a stone at her family’s house and hit her grandmother. Despite the threats, Isadora says the attention had more positives than negatives, and is determined to keep on updating her page. “I really wish state schools were as good as private ones,” she said.

We’ll leave the final word to Bia Granja, who points out that 2012 was somewhat of a turning point for Brazil’s Internet:

“On a macro level, Brazilians now understand better the potential of the Internet as an empowerment tool. They see it isn’t only a source of entertaining videos, and can also bring them other benefits.

Overall, it’s been an interesting time for the relationship between Brazilians and social media, between the country and its digital culture. Digital culture goes beyond memes, it is a way for users to express themselves and create things, which is an important cultural shift.”