AgileBits’ 1Password is a handy cross-platform utility that automatically generates and keeps track of your passwords across all the websites you have accounts on. It also securely stores and allows for easy retrieval of your credit card information when shopping online and provides a place for you to store software licenses, personal information and other miscellaneous odds and ends. It was one of our “five powerful apps that every Mac user should have”.

With the addition of support for extensions to Safari last year, AgileBits decided to move their plugin-based Safari integration to the officially supported extensions architecture. However, the new 1Password extension for Safari, even though it had some features that the older plugin did not, wasn’t nearly as powerful as its predecessor.

That has changed with the version 3.8.6 update to the 1Password extension, which brings with it a whole host of features, some of which harken back to the old plugin and others that are brand new. 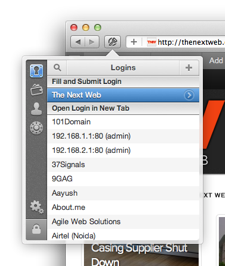 The extension window has been redesigned to combine the “Logins for This Site” and “All Logins” lists under a single tab, all of which can be navigated through by typing the name of the login you want (as before). You can now click on the “Fill and Submit Login” header to toggle between auto-submission of logins and simply filling them in—which is a great addition.

Perhaps most significantly, the autosave bar is no longer an iFrame that partially covers the top of the webpage. It now appears as a toolbar, which feels much more Mac-like and looks better. Unfortunately, you’ll have to contend with the iFrame if you are using Safari in fullscreen mode. Another major addition is that the extension now allows you to overwrite (in Firefox and Safari, with Chrome support to come soon) an existing login with the new one you’ve saving.

There are several other large and small changes, both to the usability and aesthetics of the extension, and you can read them in full on the change log. Our only complaint is that the extension still does not display the cursor when you are editing one of your logins.

If you have the “Install Updates Automatically” preference enabled in Safari’s Extensions pane, the extension should already have been updated by now. If not, you can update it manually from the AgileBits website.