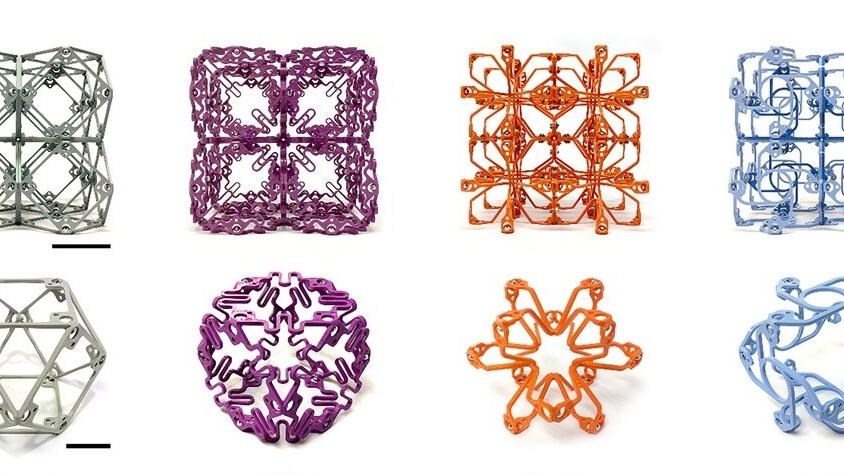 There are two schools of thought when it comes to building bridges. There’s the traditional way involving humans assembling materials to create a unique structure. And then there’s the way MIT and the US Army want to do it: you open a box and a bunch of Lego-style construction bricks fly out and turn themselves into a bridge.

When those bricks – actually, more like interlocking snowflakes – get done being a bridge, they could be autonomously reconfigured to suit another need such as becoming a boat or a glider. They could also simply disassemble themselves and return to storage.

This might sound like something out of Neural’s Guide to the Glorious Future of AI, but it’s actually completely grounded in present-day technology.

MIT and a US Army think-tank recently published a research paper detailing the development of a mass-producible, reconfigurable, metamaterial that could be used to create robots made out of robots.

According to the research team:

Here, we present a construction system for mechanical metamaterials based on discrete assembly of a finite set of modular, mass-produced parts. We demonstrate experimentally the desired metamaterial property for each part type and, combined with numerical modeling results, display other unexpected and useful properties. A modular construction scheme enables a range of mechanical metamaterial properties to be achieved, including rigid, compliant, auxetic, and chiral, all of which are assembled with a consistent process across part types, thereby expanding the functionality and accessibility of this approach.

That’s a long way of saying they’ve created a Lego-style kit of super-strong, easy-to-manipulate materials that can be mass-produced quickly and cheaply.

What started as an Army thought experiment to come up with the quickest, cheapest way for a robot swarm to build a bridge for troops turned into a vein of research with the potential to upend the field of construction.

The core challenge for quick-deploy construction systems is figuring out how to get the most out of each and every scrap of material. Under the current technology paradigm, for example, a small team of soldiers would need a variety of vehicles and external support teams in order to navigate long stretches of multi-faceted terrain.

MIT and the Army’s voxel-based construction system aims to solve this problem. Through the use of special AI-generated shapes at the cellular level, the system’s interlocking voxel pieces are like 3D-printed material that doesn’t require a printer to work with.

What’s even more impressive is once construction is complete, the pieces can be reconfigured into myriad other designs. Per the paper:

Quasi-static reconfigurability was demonstrated through the assembly, disassembly, and reuse of macroscale (225-mm pitch) octahedral voxels. In that case, over 125 voxels were used to build a 5-m bridge capable of holding several hundred kilograms, then these were reconfigured into a boat, and then these were again reconfigured into a shelter. Scalability has been demonstrated in prior work, where over 4000 injection-molded octahedral voxel units were assembled into a 4.25-m wingspan ultralight lattice aerostructure.

While this research is still in its early phases, the ultimate goal is the production of a set of self-assembling AI-powered construction materials in the form of a deployable robot swarm.

In theory, a group of soldiers could radio for a swarm and, somewhere back at the rear echelon, a stack of building blocks would receive the signal and turn itself into an “ultralight lattice aerostructure” that could be dropped into the battlespace via drone. Once on the ground, the materials could follow the soldiers around becoming whatever vehicle, structure, or tool they needed.

You can read the full paper here on ScienceAdvances.