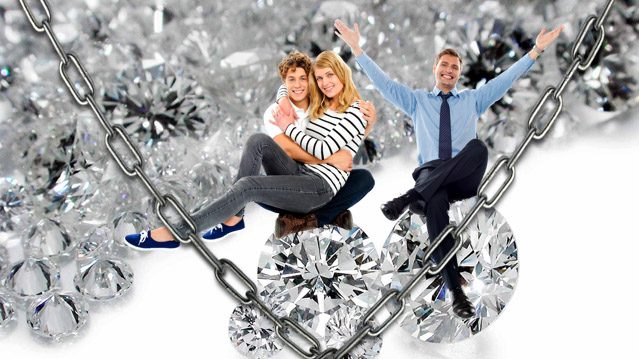 The key word that has thus far been most strongly associated with blockchain technology is decentralization. And indeed, decentralization is the most novel and important feature of blockchains. However, there’s another blockchain buzzword that is going to become increasingly common in the next few years. That word is tokenization.

What is tokenization and why is it important?

As much as the cryptocurrency market has grown in recent years, it still pales in comparison to the markets of many other assets. Real estate, stocks, gold, carbon, and oil all have markets in the multiple trillions of dollars. Tokenization is the process of transforming those “real world” assets into digital tokens that represent them. In doing so, assets can be made more divisible, liquid, and transparently trackable.

For all of the assets listed above, tokenization can also greatly reduce overhead costs and fraud. For one asset, however, it can do much more than that. You see, the diamond market faces an additional problem that those other assets don’t face: a lack of fungibility. Every gram of gold is worth the same as any other gram, just as every barrel of oil is worth the same as any other barrel. But for diamonds, there isn’t any single metric that can be used to determine a stone’s value.

As a result of this lack of fungibility, the diamond market is extremely limited in who can participate. Only those with industry-specific expertise manage to trade diamonds profitably, while amateurs who try to resell a diamond commonly face losses between 30-50% of the fair market value they should be getting. On top of that, diamonds are difficult to transfer because they require high levels of security and transparency. Counterfeits are an ever-present risk, so careful inspections must also be carried out each time ownership of a diamond changes hands.

All of that is simply to say, tokenization of diamonds through blockchain technology is a potentially revolutionary idea. And there’s a company, CEDEX, that has spent the last couple of years turning that idea into a reality. CEDEX is the world’s first decentralized diamond exchange, built on the Ethereum blockchain. It promises to bridge the gap between the traditional diamond industry and modern financial markets, enabling people to invest in and liquidate diamonds the same way they would any other financial asset.

Individuals can use the decentralized exchange’s native token, CEDEX Coin, to purchase individual diamonds, shares of a high-value stone, or shares in a collection of diamonds called a diamond basket. CEDEX isn’t the first example of tokenizing a commodity. For example, a project named Digix has already tokenized gold on the Ethereum blockchain. However, CEDEX is certainly the most exciting application of tokenization because of all of the potential it unlocks.

Imagine if, in today’s market, someone (let’s call her Alice) wanted to invest a few thousand dollars into diamonds as a hedge against the stock market and inflation. Given the variety that exists between diamonds, Alice would ideally own a diverse portfolio containing pieces of several different diamonds having varying grades and cuts. With her relatively small budget, finding a seller would be next to impossible. From the seller’s perspective, it’s not worth the time, effort, or overhead cost to find a small-time investor.

The fact that these transactions can’t happen is a lose-lose for both parties, but it is simply a fact given the current circumstances. By tokenizing diamonds, that all changes. Alice can now go on the blockchain-based exchange and look through the diamonds and diamond baskets listed there, all of which are transparently priced. Meanwhile, sellers have a new distribution channel that requires minimal effort and cost to maintain. And diamond holders who have been unable to get a fair value for their stones benefit most, as the liquidity, standardization, and transparency created by CEDEX mean that they don’t have to settle for low-ball offers from retailers and pawn shops anymore.

The benefits of tokenization don’t stop there, though. CEDEX Coin’s utility will extend beyond just diamond transactions to include:

• Exclusive access to supplementary services such as gemological labs that authenticate and grade diamond assets, transportation, insurance, and custodial services.
• Access to loans (in CEDEX Coins) through diamond investment portfolios
• Transparent payment for diamond sales
• Ability to cover borrowing and collateral fees by opening a short position through the CEDEX platform

Ultimately, it won’t be a surprise to see most major assets become tokenized in the future. The transparency and trustlessness of blockchain technology can improve just about every financial market there is. But for diamonds, the time for tokenization has already arrived. 2018 is the year that diamonds finally become a publicly tradeable asset.

The first chance for investors to purchase CEDEX Coin will come with the March 16th token pre-sale. To register for the pre-sale or learn more about CEDEX and their innovative technology, check out their website. You can also get involved with CEDEX team and community on Telegram, as well as by following the project on Facebook and Twitter.

This post is brought to you by CEDEX and shouldn't be considered investment advice by TNW. Yes, TNW sells ads. But we sell ads that don’t suck.