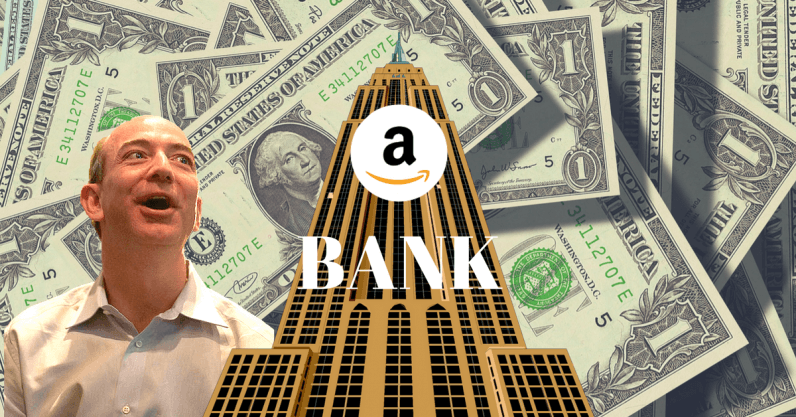 Amazon is reportedly looking at getting into the retail banking space. According to The Wall Street Journal, the company is contemplating launching a new checking account that would cater to young people and “the unbanked” — those defined as having struggled to gain access to traditional financial services.

Although not expected, there are three reasons why this move isn’t particularly shocking. Firstly, Amazon has fingers in a lot of pies — not just online retail, but also web services, payment processing, logistics, and more. What’s another? Especially in an industry that’s renowned for its excesses and the ludicrous profits.

That brings me nicely onto my second point: there’s a lot of money to be made in the world of financial services. In 2014, the top thousand global banks made an incredible $920 billion in profit. That’s a huge number, and Amazon undoubtedly wants a piece of it.

What makes Amazon’s position so strong is that it’s got the technical know-how and the startup capital to make a success from its effort here. You can’t really say that about many fintech companies, who often spend their first years struggling to stay afloat.

Finally, it’s poised to take advantage of a trend observed over the past few years, where banking products are tech-first. By that, I mean they use technology to offer delightful user experiences. Customers are empowered to control their money, through the medium of innovative apps and flash-looking websites.

When tech and finance collides, everyone benefits

Banking is complicated. It’s a highly-regulated area. But over the past few years, many of the hurdles have been lifted, allowing new startups to launch their own offerings. From personal experience, I can say that many of these are pretty incredible.

Yes, these so-called “challenger banks” are doing the same thing banks have done over time. They keep money safe, and let you make purchases and withdrawals. Many offer credit to deserving customers as a revenue stream.

What’s special is how they do this. They use technology to make banking as frictionless as possible. Through apps on their phones, customers can immediately know what’s happening with their money, and are able to make decisions autonomously.

Unlike banking of yore, there’s often no need to speak to another human being. Some common tasks, which previously would have required a 30-minute phone call to a customer service representative, are reduced to the tap of a touchscreen. Remarkable.

This form of self-driven and branchless banking was made possible by the Internet and the recent ubiquity of smartphones. Although challenger banks remain largely unproven (I’m a huge fan, but I recognize they’re largely untested, and have nowhere near the same amount of customers as the long-established legacy banks), they offer features that are yet to appear in mainstream banking products.

I’m a bit evangelistic about one company in particular, Monzo. I’ve extensively written about them in the past, so I’ll curb my enthusiasm somewhat, but let me list my favorite features:

It’s worth noting that this isn’t distinct to one company. Not in the slightest. If you survey the current crop of high-tech challenger banks, you’ll notice that this is just how they work. If you’ve used Monese or Revolut, this will all sound really familiar to you.

In short, tech has established a new baseline for how banking works, which is actually really exciting.

That’s cool and all, but I still think there’s room for improvement. If Amazon follows through, it’ll be a game-changer. Every company that’s come and disrupted banking over the past few years has had to start from the ground floor. They’ve had to raise capital, and recruit staff. They’ve had to build a company, essentially.

Amazon is one of the biggest companies in the world. There’s no shortage of cash there. It also boasts a cachet of talented staffers who have the experiences needed to pull Amazon Bank (or the Bank of Amazon, maybe?) off.

Infrastructure? It can draw from the Amazon Web Services (AWS) well. Payments and compliance? Look no further than the teams working on Amazon Pay.

Anyone else, it can just buy. It has the money and the name-brand recognition that attracts the world’s most talented techies. Amazon isn’t going to struggle here.

Starting a bank is expensive. Monzo Bank, despite having nearly 500,000 customers, is yet to make a profit. It’s had to go through several rounds of fundraising in order to keep afloat.

Amazon won’t have to deal with these distractions, because it’s Amazon. It’s got the money to burn.

If the Wall Street Journal is to be believed, Amazon plans to partner up with an established legacy bank — perhaps Capital One or JP Morgan Chase. That could simplify matters further.

In short, Amazon enters this field with an inbuilt advantage unlike any other. And I’m confident that whatever Amazon creates, it’ll undoubtedly offer a better user experience than that offered by traditional legacy banks.

It’ll be faster, easier to use, and reflective of how people want to access their money. It’ll be mobile-first, and look and feel amazing.

Or better put, it’ll feel like a tech product first, and a bank second.

And yes, it’ll probably take a few tips from the current crop of ascendent challenger banks which are present not just in the UK, but also Europe and the U.S.

Companies like Monzo, Monese, Revolut, Starling Bank, Tandem, and N26, who all are doing interesting things. In the US, it’s can learn from Simple Bank’s successes. And India has been doing a lot of interesting things with financial services for a while now.

It’ll have inspiration to draw from, but it’ll also have stiff competition.

The early reports suggest that Amazon is looking towards the millennial and unbanked markets, but it’s unlikely that the company will stop there. Amazon is too ambitious. Too hungry.

To this observer, sticking to these two markets just doesn’t fit Amazon’s modus operandi. It’ll almost eventually aim its gaze further afield — either to niches like business banking and investments, or to other countries.

And if that happens, perhaps Amazon will do to traditional banking what it did to online retail, and ultimately dominate it.

Read next: Binance users are suddenly having their coins converted to Bitcoin [Updated]