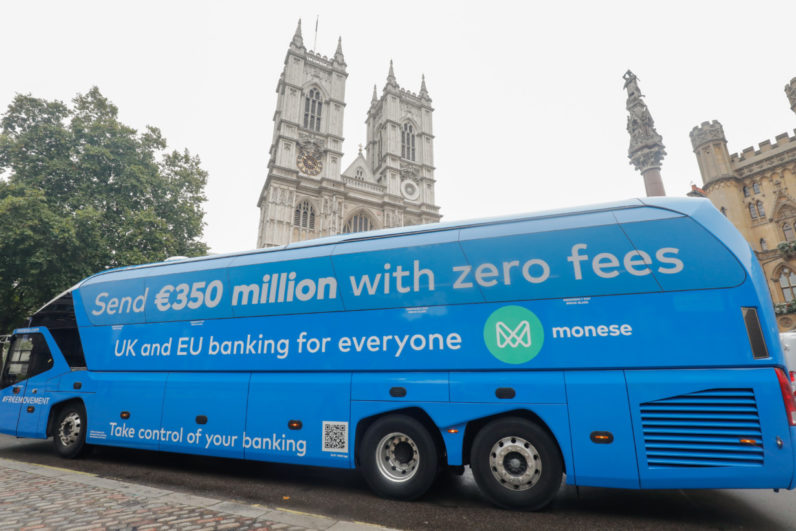 Remember the Brexit Bus? During the fraught campaigning surrounding the UK’s referendum on its EU-membership, the Vote Leave campaign hired a bus, and plastered on it the words “We send the EU £350 million a week. Let’s fund our NHS instead.”

They didn’t realize it at the time, but this would come to symbolize the fact-free nature of the Leave campaign.

For starters, there was no £350 million; when you subtract the UK’s rebate, the real figure is much lower. And courtesy of higher costs following the post-Brexit drop in the pound, and the troubling matter of the “divorce bill,” it seems unlikely any more money is heading to the UK’s beleaguered health service.

And now, the Brexit Bus has found a new lease of life with UK challenger bank Monese behind the wheel. The company hired it to celebrate its expansion to mainland Europe, and is offering €350 million in fee-free money transfers between its UK and Eurozone accounts.

The side of the bus now reads “Send €350 million with zero fees. UK and EU banking for everyone.” On the rear and passenger-door side of the vehicle, it also says “#FreeMovement,” although this presumably refers to money, not people.

Monese plans to tour the bus across Europe, with the first stop after London being Paris.

The company opened Eurozone accounts to existing customers last month, and since then, over 6,000 euro-denominated accounts have been opened. It says 50 different nationalities now hold both a UK and Eurozone-based Monese account.

Monese launched in 2015, and is one of several mobile-only banks based in the UK, including Starling Bank, Atom Bank, and Monzo.

Customers sign up by taking a picture of their IDs, along with a video selfie to verify their identity. Should they wish, they can open a UK and Eurozone bank account at the same time.

This is pretty handy for people who work across borders. Airline personnel, for example, who often have to open bank accounts in countries other than their own in order to receive salaries. The company says that 75 percent of its UK accounts and 30 percent of its Eurozone accounts are used to receive paychecks.

In a statement, Monese founder and CEO Norris (Nigel + Boris = Norris?) Koppel said, “Our expansion is aimed at breaking down financial barriers when crossing borders within the EU, by providing a simple way to manage your money on the go. We believe that people should be able to live, travel, and work freely, without the administrative burdens and restraints of legacy financial systems.”

You can check out Monese here. And while you’ll be able to transfer money fee-free for a while, Monese is sadly unable to do anything about the cratering value of the post-referendum pound. Sorry about that.

Read next: Amazon India wants customers to try its products in retail stores