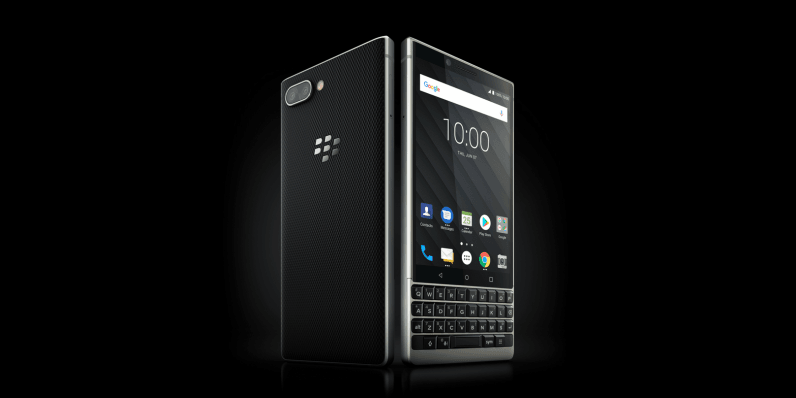 Depending on how you feel about the physical keyboard, you’ve been looking forward to this day for a while: TCL just officially announced the BlackBerry Key2.

The Key2 is the follow-up to last year’s KeyOne. Like its predecessor, the Key2 is a conventional-looking BlackBerry phone. That’s to say it’s a candybar design, much like the Curves and Bolds of yesteryear, rather than a slider or all-touchscreen device.

That’s not to say it’s ugly though. Perish the thought.

TCL has taken great pains to make it appear more polished than its predecessor. It has largely accomplished this.

The Key2 has a more refined aesthetic than its predecessor. As we noted when we saw leaked pictures, the device is free of the obtrusive sensors and holes that pockmarked the KeyOne, and is available in two gorgeous variants — black and silver.

The keyboard has also been redesigned. The company says that key height has been raised 20 percent, in order to offer a more comfortable typing experience, and aid in accuracy.

So, what about under the hood? There’s no surprises here, as the spec sheet was leaked earlier this week.

The silicon powering the Key2 is Qualcomm’s Snapdragon 660 SoC. This is a major leap beyond the Snapdragon 625 that powered the KeyOne, but is still undeniably a mid-range chip.

Despite that, it’s one that makes sense for the Key2. Few people are likely to use BlackBerry’s latest handset for gaming, as this is above all a productivity device. By marrying the Snapdragon 660 with a decently-sized 3,500 mAh battery, the Key2 promises some impressive battery endurance.

Elsewhere, you’ve got 6GB of RAM, paired with either 64 or 128 GB of storage. The Key2 also supports microSD cards as large as 256GB.

Another area that’s seen some love is the camera. Dual-cameras are now ubiquitous, and TCL has accordingly packed two 12MP shooters into the Key2. This should offer some pretty decent portrait performance, but I don’t expect anything groundbreaking, considering that photography has never been a core concern of BlackBerry’s userbase.

On the front of the device, there’s an 8 megapixel fixed-focus camera, which can record full 1080p video. That’s probably going to be adequate for anyone who buys this device for work.

The Key2 runs Android 8.1 Oreo, and is part of the Android Enterprise Recommended program, which means users will get monthly updates. Plus, the device comes hardened against attacks by default.

And as was the case with the KeyOne, it comes bundled with BlackBerry’s security and productivity software. This includes DTEK, which lets users track the real-time health of their phone, as well as Locker, which is an ultra-secure container for your files and documents.

TCL and BlackBerry Mobile says the Key2 will be released globally at some point in June, but hasn’t given a concrete date.

We do, however, know how much it’ll cost. In the US, you can expect to pay $649. Across Europe, the suggested retail price is €649, while the handset is going for £579 and $829 in the UK and Canada respectively. This is keeping in line with what TCL charged for the KeyOne back in 2017.

We’ll be getting a Key2 review unit in the coming days. so stay tuned for our final verdict.

Read next: Researchers are using AI to save indigenous languages from extinction