The smartphone world has all but moved on from BlackBerry. Even BlackBerry itself seems to have moved on, reinventing itself as a software and services company. Its latest effort isn’t produced by the Canadian icon, but rather by TCL Corporation, a little-known Chinese manufacturer which also licenses the Alcatel brand.

But then it introduced the KEYone. Could this keyboard-toting Android phone start a fire in the long-extinguished kiln? I’d like to think so, because the BlackBerry KEYone is a bloody good phone.

Before we talk about what it’s like to live with a BlackBerry-branded phone in 2017, let’s first talk about what’s powering this handset. Under the hood, you’ll find:

The body of the phone is made of sturdy aluminum, which can withstand all sorts of dents and scrapes. After over a week of use, I’ve accidentally dropped my review unit onto rugged asphalt several times, and each time it has emerged unscathed.

The back of the device has a lovely texture. Although it didn’t really do anything to strengthen to grip, it does feel amazing in the hand.

On the bottom of the device, you’ll find a USB-C port, paired with some truly loud speakers. If you want to annoy fellow passengers on the bus with your favorite tunes, this is the phone for you.

Excluding the physical keyboard (which we’ll get to later), the phone packs several buttons on the side of the device. There’s the usual volume rocker and power button, but there’s also a function key which can be mapped as desired. I’ve set this to fire up the phone’s camera. Given that dedicated camera buttons are a bit of a rarity nowadays, I was glad to be given an option.

That said, I was less enamored with the fact that the power button was on the left-hand side, which is another weird oddity. It took a long time for me to get used to that.

Speaking of the camera, the KEYone comes with a rear-facing 12MP camera and a front-facing 8MP camera. The latter has a dual-LED flash setup that works pretty well at night. 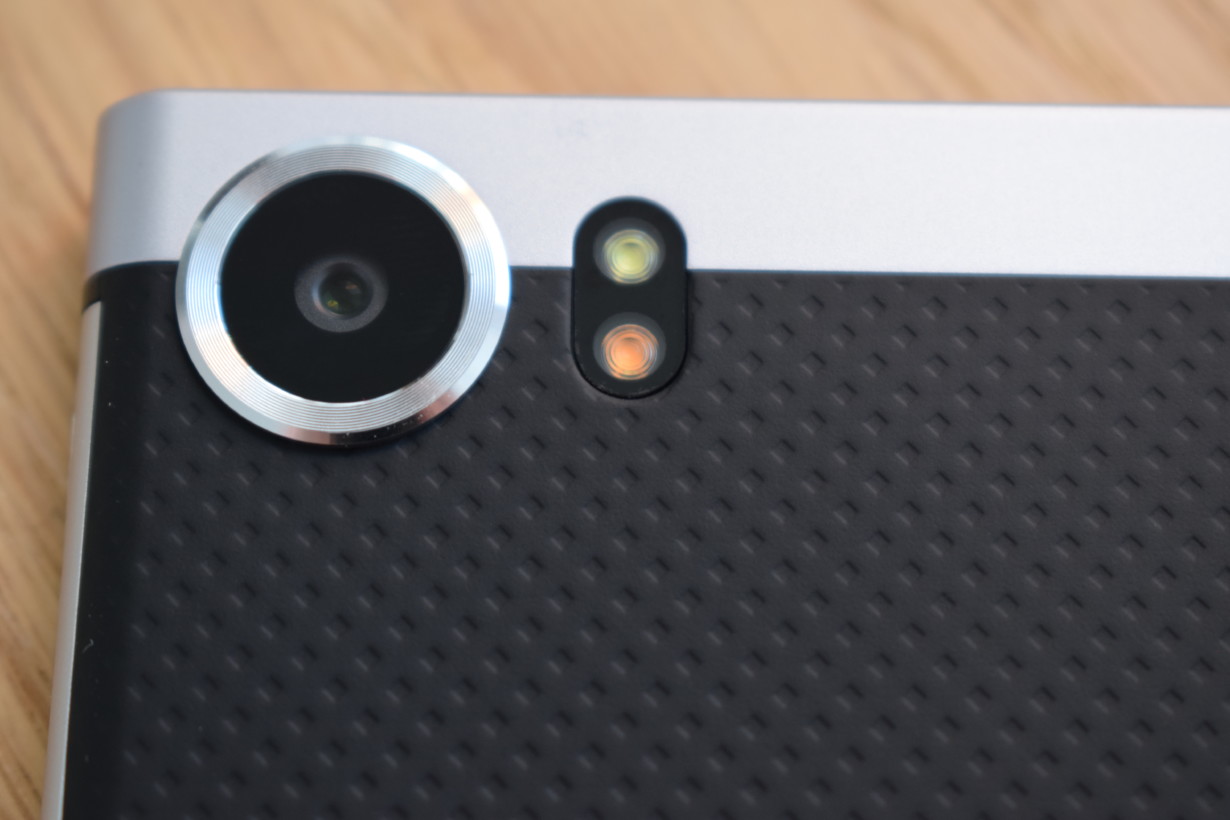 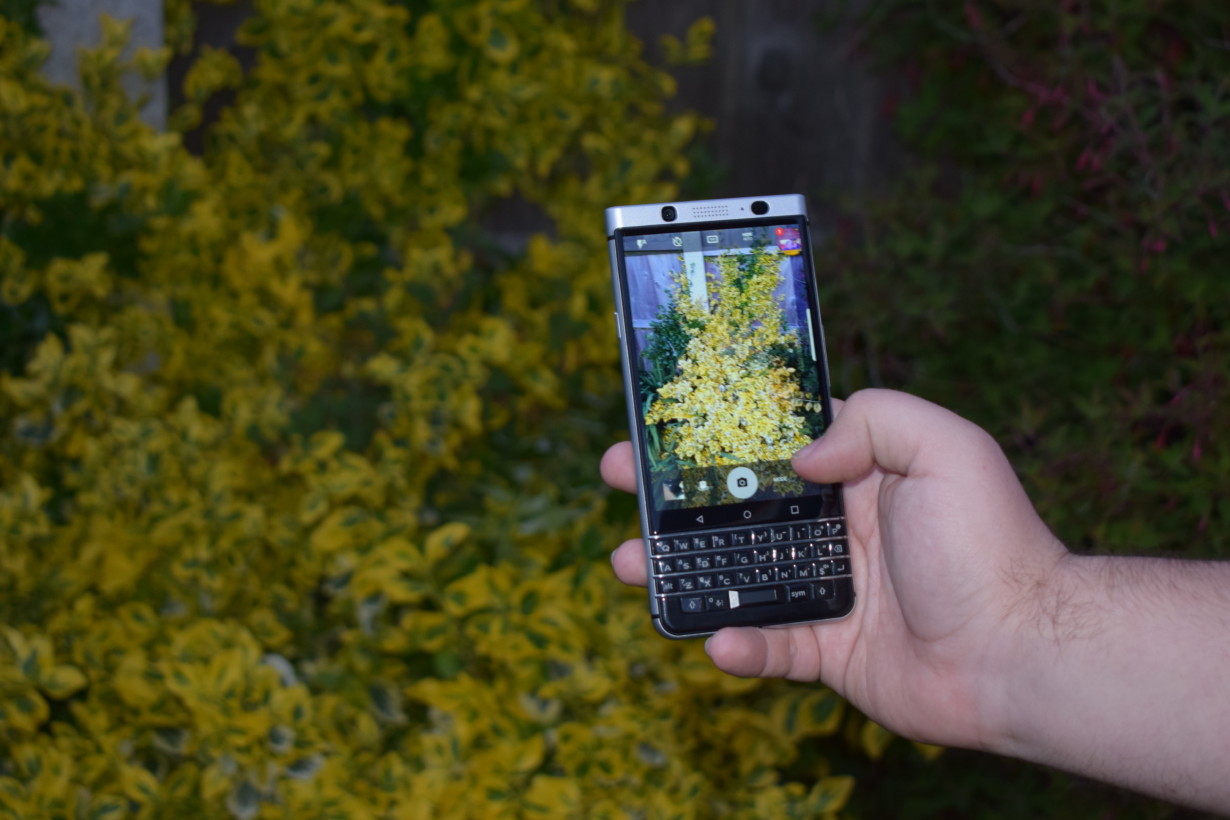 A lot has been said about the KEYone having the same camera sensor as the Google Pixel, which is known for its kick-ass camera. Unfortunately, this doesn’t count for much, as much of the magic that makes the Pixel work comes from the phone’s software.

Don’t get me wrong, the camera quality on the KEYone isn’t bad — quite the opposite, it’s entirely serviceable — but it’s certainly nothing to write home about.

One common criticism of the device is the relatively low-powered silicon powering it. The Qualcomm Snapdragon 625 is hardly a speed demon. But for most day-to-day tasks, it manages just fine. You can pig-out on Chrome tabs, and easily flick between emails and documents.

The choice of a low-power chipset (sorry, platform) is a smart one, for a couple of reasons. Firstly, unlike previous BlackBerry handsets (mentioning no names, cough BlackBerry Q10 cough), the KEYone isn’t prone to overheating.

It also gives you some pretty great battery life. The phone already has a pretty beefy 3505 mAh battery, but with this power-sipping chipset, you can get easily get about 36 hours of life with moderate use.

If you’ve used a BlackBerry device in the past, the KEYone will feel a little bit like coming home. At least, it did for me.

I’m a long-time BlackBerry fan. My first real smartphone (excluding the Nokia E71) was the BlackBerry Bold 9730. After two years, I ditched it and started several flirtations with other mobile operating systems, including Android and Windows Phone. Eventually, like the prodigal son I was, I returned back to the BlackBerry brand with the BlackBerry Q10, which was my main workhorse for a couple of years afterwards, until I lost it in a cab on a drunken night out.

As a result, it didn’t take long for me to re-adjust to using a physical keyboard. Although, I accept that if you’re new to the BlackBerry brand, it’ll take a bit of getting used to.

But persevere, and you’ll find your reward. Although the KEYone isn’t manufactured by BlackBerry proper, it’s a pretty faithful replica of the keyboard-clad devices of yore. Every button feels delightfully clicky, and each press registers audibly. While it’s pretty compact, I didn’t find it uncomfortable to type on.

In many respects, I found it vastly superior to the virtual keyboards that are ubiquitous in 2017. My typing speed was undeniably slower — I mean, how the hell is a physical keyboard supposed to compete with SwiftKey or Swype? But typing felt less fatiguing, and I was more motivated to compose longer and more detailed messages. I was also able to write with greater precision. I made fewer mistakes, especially when touch-typing and not looking at the screen.

The keyboard’s space bar also acts as the device’s fingerprint reader. I loved this, as it’s innocuous and it doesn’t take up any screen space. It just effortlessly blends into the device, like a chameleon.

The fingerprint reader itself is really fast at identifying fingerprints. And you’ll also be glad to know that the inclusion of a fingerprint reader didn’t detract from the actual utility of the key. It felt just as clicky and as responsive as its counterparts.

It’s worth noting that some applications refuse to use the physical keyboard. My bank’s app, for example, brings up a virtual keyboard whenever I need to type something – like when I make a transfer of funds.

I assume this is for security reasons, although I found it more than a little bit ironic, given that the KEYone is marketed as an ultra-secure Android device.

One of the best hangovers from the BlackBerry Passport, which is found in the KEYone, is the fact that it lets you actually perform gestures on the device. So, if you’re scrolling through an article, you can swipe down on the keyboard. If you want to scroll up, just swipe up.

This takes a bit of getting used to, but given the keyboard occupies the lower quarter for this device, it eventually starts feeling delightfully natural.

You can also use keyboard gestures with the phone’s predictive texting software. The KEYone’s keyboard will make suggestions — three at a time — at the bottom of the screen. To select the one you want, just swipe under it. Unlike the stock Android keyboard, your fingers don’t actually need to leave the keyboard, which is hugely welcome.

One thing I missed was the trackball/trackpad present on old-school BlackBerry phones. I know it’s a bit anachronistic, but it allowed you to dive into a word and make corrections with a minimum of fuss.

While the trackball doesn’t make an appearance here, there is a gesture that allows you to do something similar. That was welcome.

Another thing missing from earlier iterations of the BlackBerry is the ability to dial a phone number from the keyboard. That’s because this version of the iconic keyboard has tread a different path, allowing you to map shortcuts to each key. If you wanted to, you could map the U key to the Uber app, and the A key to the Airbnb app. You get the idea.

I’m not about to criticize this. I recognize its appeal, especially if you’re a hoarder of applications, and you want to bring some order in without making any compromises. It’s just a significant departure from what came earlier, and it’s a bit annoying to have to make the effort of opening the call app whenever you want to ring someone.

The KEYone is more than just a phone with the BlackBerry logo and a physical keyboard. It comes with a whole bunch of BlackBerry software. The main three are DTEK, BBM, and BlackBerry Hub.

There’s DTEK, which is a security monitoring package. This gives you a birds-eye view of app permissions, and lets you see where your device might be vulnerable. If you’ve forgotten to encrypt your device, or have set up your device to run non-Play Store apps, DTEK will nag you to sort it out.

There’s also BBM. Back in the late 2000’s, this was the go-to mobile messaging app. But now, it’s a veritable ghost town. Most people use WhatsApp, Telegram, Signal, Viber, or Kik. As a result, I didn’t use this much.

There’s also the BlackBerry Hub. This is another hangover from BlackBerry 10, and was my favorite feature of the long-forgotten operating system. BlackBerry Hub acts as a one-stop shop for notifications, allowing you to access pretty much anything you care about — Facebook, LinkedIn, Twitter, email, and so on — in one place.

I wanted to love this, but this time around, I’m not as enamored. If you use it for your email, for example, you’ve got to turn off notifications on your account. Otherwise, you end up with duplicate notifications which you have to manage. It’s also a little bit delayed. If I get an email, my phone will buzz once as Gmail registers the message, and then buzz again ten seconds later as the BlackBerry Hub takes action.

Another annoyance of the BlackBerry Hub is that whilst Gmail is good at only showing you the notifications you care about — specifically those that don’t fall into social or promotions –, BlackBerry Hub is much less discriminating. That said, it serves as a good reminder that I need to remove myself from several hundred (thousand?) mailing lists.

Here’s the big question: should you take a gamble on BlackBerry’s latest handset? I think so, because – again – it’s a bloody good phone.

At $599 (£499 in the UK, and €549 in Europe), it’s pretty pricey compared to phones with similar guts. But you’re not paying for the silicon inside the device, but rather the experience, and the KEYone offers an unsurpassed productivity experience compared to anything else on the market.

It’s a business class phone, but with a premium economy pricetag.

Sure, the camera feels a little overhyped (although that’s not to say it’s bad), and the software feels a little ho-hum. But the phone itself feels gorgeous in the hand, and even better when you’re composing a long email. Calls are loud and clear, and the screen is a delight that performs well even in the sunniest of weather.

The BlackBerry KEYone is a triumphant return to form for the BlackBerry brand, and I think it might, just might, make you crave a physical keyboard once again.

You can pick one up in the UK today from the Carphone Warehouse. It’ll be available to pre-order in Canada from the 18th, before eventually going on sale in North America from the 31st.