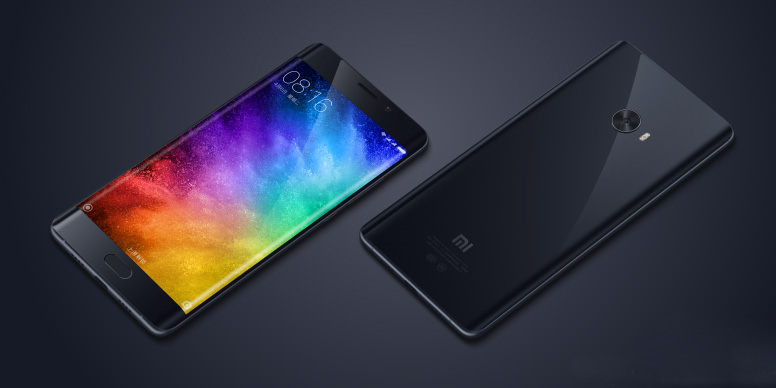 In the wake of the massive Samsung Galaxy Note 7 global recall, Xiaomi unveiled its latest Android phone for fans of large devices, the Mi Note 2, at an event in Beijing today.

Part of the company’s premium Mi line (Xiaomi’s Redmi devices are aimed at budget-conscious consumers), the Note 2 features a 5.7-inch flexible OLED display that curves around the sides of the handset.

It sits under a panel of curved glass that, according to Xiaomi, widens the field of vision for the wraparound portions of the screen. We saw a clip of the bendable display in action a few days ago, and this is the first product from the company to feature it. Xiaomi says the custom display, which allows for nearly 10 percent more screen real estate as compared to the iPhone 7 Plus, is six times more expensive to produce than a standard 5.5-inch LCD screen.

The device is made of aluminium and features curved glass on both the back and front, which fit seamlessly and make for a mirror-like finish. There’s no camera bump at the back as the lens and two-tone flash sit flush on the rear surface. It’ll be available in Piano Black and Glacial Silver finishes.

Under the hood, you’ll find the new Snapdragon 821 processor at 2.35GHz paired with up to 6GB RAM and 128GB of onboard storage. There’s also NFC for contactless payments, HD lossless audio and high-precision GPS, support for 37 bands so it can be used anywhere in the world and a large 4,070mAh battery that works with Quick Charge 3.0.

On the imaging front, the Note 2 packs a 22.56-megapixel rear camera with 4K video capture, as well as electronic image stabilization made possible by a dedicated 3-axis gyroscope to detect and compensate for jitter in real-time. The front fascia features an 8-megapixel f/2.0 aperture selfie camera.

The Mi Note 2 will be available from November 1 in two configurations:

With that, Xiaomi has a strong contender to take on the $649 Google Pixel, the recently announced $399 LeEco LePro 3 and whatever Samsung comes up with to succeed the disastrous Galaxy Note 7 with similar hardware. Of course, the Mi Note 2 will first launch in China and subsequently arrive in other Asian markets before making its way elsewhere in the world. Stay tuned to TNW for a full review.

Read next: Why Spotify's Discover Weekly is getting really boring