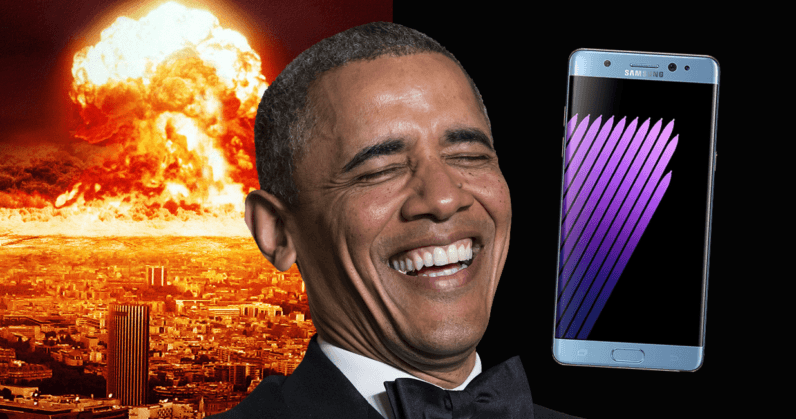 Samsung has been dealing with a lot of harsh ridicule in light of the recent controversy with its exploding Galaxy Note 7, and the latest to roast the South Korean tech titan is President Barack Obama himself.

On Thursday, President Obama spoke at an event in Miami where he briefly discussed Obamacare. Speaking in defense of his Affordable Care Act, the president made an interesting analogy, comparing the healthcare plan to a company releasing smartphones.

“When one of these companies comes out with a new smartphone… [and] it has a few bugs, what do they do,” he asked, “they fix it, [they] upgrade it.”

With a giggle, he added: “Unless it catches fire – then they pull it off the market”.

Without explicitly naming Samsung, the president then continued with his analogy: “But you don’t go back to using a rotary phone! You don’t say, well we’re repealing smartphones – we’re just gonna do the dial-up thing.”

This is a simultaneous 🔥🔥🔥 on Samsung, Republicans and rotary phones. pic.twitter.com/HkHJeUfbL7

Samsung has been catching a lot of heat recently after the company decided to discontinue its flagship Note 7 phone in lieu of numerous reports of exploding devices.

Since then, the company has been trying to restore faith into consumers by offering them a chance to replace their hazardous Note 7 with another Samsung device, going as far as setting up emergency exchange booths at airports across the globe.

Still, it’s difficult to recover from a burn like that – from the President of the United Sates himself.

Samsung's in big trouble. Obama just made a Note 7 joke on CNET