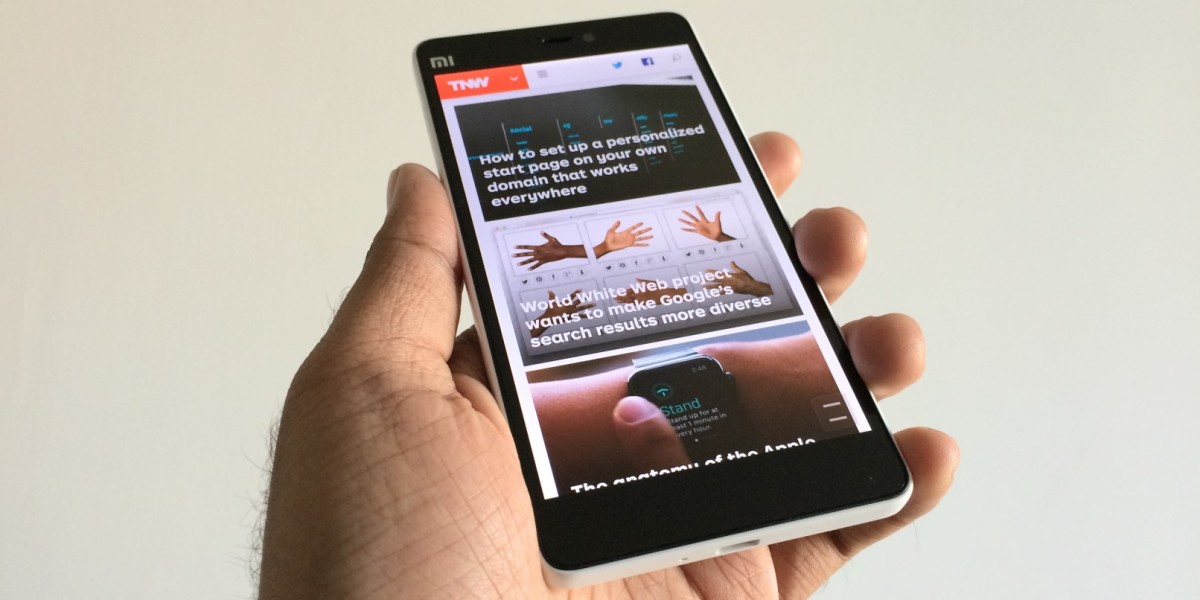 The Chinese manufacturer recently launched its mid-range Mi 4i phone. For about $205, you get a handsome plastic unibody 5-inch Android 5.0 device with decent specs — but how does it all come together?

I put the phone through its paces over the past week, to see if the Mi 4i lived up to the hype. SPOILER: it’s pretty damn good.

This is how a budget phone should be built. The Mi 4i is made of mostly plastic, but it feels solid everywhere you touch it.

While the design is unremarkable, the phone’s high-quality build is noticeable even from a distance. The camera, USB and headphone ports and the durable stainless steel buttons are all well finished.

At 7.8-mm thick, the 5-inch device is very easy to hold and the matte back is fairly grease-resistant. It didn’t even get gross when I handled it after finishing a bag of chips (the TNW-patented material test).

At 130g, it’s light enough to use for extended periods of time while reading or watching videos, but still has a nice heft to it so you don’t feel like you picked up an empty shell with a heavy battery near the bottom.

The Mi 4i features a 1080p 5-inch display and boasts a pixel density of 441ppi with 95 percent NTSC color gamut. Simply put, that’s a great screen to gawk at at any price.

The display is sharp even when you’re only a few inches away and offers excellent viewing angles. Colors are visibly richer than, say, the iPhone 5s and videos and games really pop on this device.

It’s also a delight to read articles and books on the Mi 4i, both indoors and out. While the company would likely attribute that to its Sunlight Display feature that supposedly adjusts contrast in real-time, I’d say it’s because of the crisp display coupled with a battery that doesn’t quit (more on that later).

The front of the device is protected by Corning OGS Glass. It helps the display look great, but I’ve already managed to get a small permanent scratch on it and I don’t even know how. In comparison, my OnePlus One and iPhone 5s have shared pocket space with my keys and have yet to pick up a single mark.

The Mi 4i’s speaker simply isn’t loud enough. Movie and TV dialogue is barely audible if you have a fan on in your room or if someone else is speaking nearby.

It may not sound like a big deal, but it also means that in-call speaker mode is barely usable in noisy environments. A tiny dimple on the back below the speaker helps keep sound from getting muffled when you place it flat on a surface like a table — but again, it doesn’t do much to fix the volume issue.

The 4G-capable Mi 4i has dual micro SIM slots, but unfortunately doesn’t have room for a microSD card for expandable storage. That means you’re stuck with the device’s 16GB of onboard memory.

Larger flash memory capacity drives up manufacturing costs significantly, and I guess that’s why Xiaomi went with just 16GB for this all-new model. But that just doesn’t cut it in 2015. A few games, apps and photos will fill that up in no time. Where do I store my music, podcasts and videos?

What is worth writing about is the device’s battery life. I got a day and a half out of a full charge, thanks to the Mi 4i’s large 3,120mAh battery and excellent power management on standby. It also supports Quick Charge 2.0 so you can juice it up fully in a couple of hours.

Xiaomi promised it would have its MIUI 6 software running on Android 5.0 by around this time, and the Mi 4i is the first device that I’ve tested running this platform. It offers smooth performance for the most part, though loading and switching apps occasionally takes a second.

Plus, Mi Cloud lets you back up contacts, messages, photos and video, notes and recordings and even find your device, just like Apple’s iCloud.

For a budget phone, the Mi 4i has seriously good cameras and imaging capabilities. On the rear, you have a 13-megapixel affair that captures a lot of detail and accurate colors. Its f/2.0 aperture allows for fast focusing and shallow depth of field to separate your subject from the background.

It’s also capable of shooting 1080p video and lets you adjust focus and exposure while recording. For low light scenarios, you can use the dual-tone flash in normal or torch mode to get a little more light in your shots. It gets the job done, but you’ll notice a lot of noise.

The camera app is quick to start up and shoot, and has a bunch of useful features, including a good HDR mode, manual controls for white balance, ISO and exposure time, and multiple Beautify profiles for selfies and portraits.

The 5-megapixel front camera offers sharp pictures and is good for video calling, but requires abundant light for usable results.

It’s rare to see a camera this good at this price point. Coupled with Xiaomi’s easy-to-use software, this is certainly one of the highlights of the Mi 4i.

Under the hood, you’ll find a 64-bit Snapdragon 615 octa-core processor, with four performance cores running at 1.7GHz and the other four power-saving cores humming away at 1.1GHz. There’s 2GB of RAM and an Adreno 405 GPU as well.

The Mi 4i can tackle browsing, images, music and video with ease. It can even handle graphics-intensive games, but you’ll notice the occasional stutter and frame lag. It also takes a second to switch between apps, but at least everything is stable and runs smoothly.

Many users and reviewers have mentioned that their devices have been overheating, but I didn’t experience any serious issues. The phone did get warm during an extended gaming session, but that’s to be expected. Plus, Xiaomi has rolled out a software update to address the problem.

The Mi 4i is a capable device. It’s just obviously not as snappy as more expensive phones.

After nearly a week of using the Mi 4i, I’m bummed that I have to return it. It’s got a great camera, runs all day and then some on a single charge, and is quick enough for most tasks.

It’s also a lot more comfortable to use than my 5.5-inch OnePlus One. I never had an issue reaching corners with my thumb, and the screen is still large enough to enjoy a book or video.

That being said, I can’t get over the 16GB storage situation. That’s a constraint that’s hard to live with and it makes the Mi 4i difficult to recommend to most people.

Still, if you can religiously back up your photos to the cloud and don’t care much for having your music stored locally, this is a great buy.