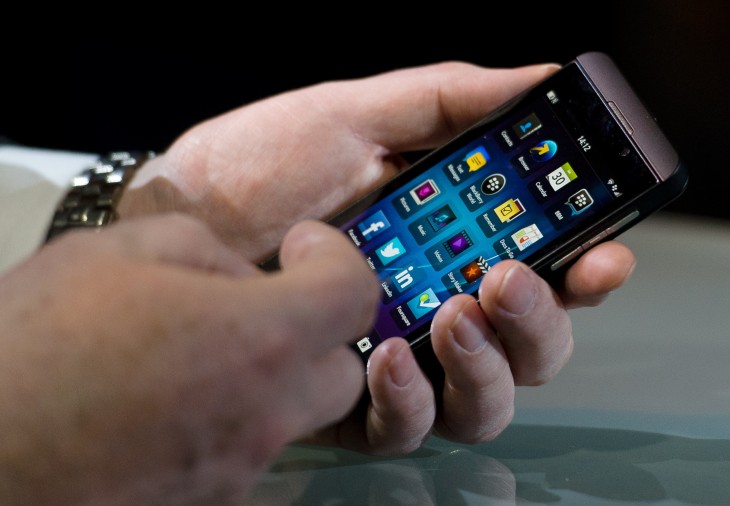 BlackBerry revealed in its fourth quarter earnings yesterday that it had shipped 1 million BlackBerry Z10 units over the last three months.

Ambiguous statements aside, it’s the first real indicator of how retailers are responding to the company’s new mobile operating system and corporate rebrand. It’s also the first time that we can try to compare BlackBerry 10 with Windows Phone, another platform competing to be the so-called “third pillar” of the smartphone industry.

What does one million mean?

When RIM – as it was known back then – held its BlackBerry 10 launch event at the end of January, CEO Thorsten Heins unveiled two devices; the BlackBerry Z10 and Q10.

The BlackBerry Q10, which offers the new touch-oriented interface with a traditional QWERTY keyboard, still hasn’t been released yet.

Furthermore, the BlackBerry Z10 has only just launched in the United States, which means that any shipments from the last week or so haven’t been included in the 1 million figure.

It’s also important to remember that BlackBerry’s shipment figures are for a single smartphone. Heins has suggested that a mid-range device will hit the market before the end of 2013, but for now these figures represent one device, leading an entire mobile operating system on its own.

In addition, the Z10 is only available in the United Kingdom, Canada, and the United Arab Emirates (UAE).

How does it compare with Nokia?

It’ll be a long time before BlackBerry can even think about competing with iOS or Android for a majority stake in the smartphone industry. A more realistic first hurdle is Windows Phone, which Microsoft is promoting hard, but still struggling to close the gap created by Apple and Google.

Now, if we’re talking about Windows Phone, we’re discussing one OEM in particular – and that’s Nokia.

Nokia released its financial results for the fourth quarter of 2012 in January. It’s a different time period, admittedly, and one that will have benefitted from the run-up to the Christmas period.

The Finnish mobile phone company reported that it had sold 4.4 million Lumia devices over three months. At first glance that feels like a substantial lead over BlackBerry, but it’s caveated by two significant differentiating factors; the number of markets that it’s operating in, and the size of its product range.

Nokia’s current Windows Phone includes the Lumia 920, 820, 720, 620 and 520, to name just a few. Over the last year or so the company has fleshed out its product portfolio to cover every type of consumer and price point, right down to the new 105 and 301 featurephones announced at Mobile World Congress.

Nokia’s flagship device, the Lumia 920, is the BlackBerry Z10’s main competition. Reports have suggested that by November 2012, more than 2.5 milion orders had been submitted for the Lumia 920 across the globe. That’s a huge leap over the Z10, but Nokia never verified that figure. It’s also worth noting that the device is available across more regions at the moment, including Australia, China and multiple countries in Europe.

The red flag here is that the 1 million figure published by BlackBerry is for Z10 shipments, rather than sales. We don’t know how many of those devices have been bought by consumers, and how many are sitting on store shelves, untouched since the device’s launch in January.

It’s possible that BlackBerry could have brokered deals with various retailers in Canada, the UK and UAE to ensure that this number was inflated after the first three months. Until the sales figures roll in, we’ll not know for sure.

Nokia, on the other hand, has published concrete sales figures for the Lumia range. That means people have purchased these online or in-store and are using them now, most likely as their daily driver. The total shipment figure for Lumia devices is therefore likely to be even higher.

So what does that mean?

The figures from Nokia and BlackBerry represent two different datasets. Taking the range of devices and global availability into consideration, however, it would seem that BlackBerry has done pretty well.

That outlook is on the condition, of course, that BlackBerry has actually sold the majority of these devices. It looks that way given the number of “sold out” stories that have been bouncing around the Internet in recent weeks, but we may never know for sure.

As it stands, the 1 million shipments suggests that there is a considerable amount of faith in the platform from retailers, at least. The initial sales for the BlackBerry Z10 – be it good or bad – will represent the initial hype and reaction from BlackBerry enthusiasts. It’s been known for sometime that the UK and UAE are strong regions for the company, so it made sense for the company to start there first.

Building on this momentum will be key for BlackBerry, both in new markets and those it’s already launched in.  If, following this initial period, shipments of the BlackBerry Z10 drop drastically, we’ll know that the sales either dried up fast, or were never there in the first place.

Given that the company’s flagship device has just launched in the United States, however, BlackBerry should be fine for its next quarterly return. Ensuring that the BlackBerry Q10 launches to similar fanfare from both retailers and consumers is crucial, as it will show that the company is capable of producing an entire portfolio of compelling smartphones, and not just a one-off to compete with the iPhone.

In short, it looks like BlackBerry has done pretty well out of the blocks. It now needs to keep pace with its rivals all the way to the finish line.

Read next: MLB.TV offers free game streams on Twitter, Facebook and Web ahead of its two-day season preview