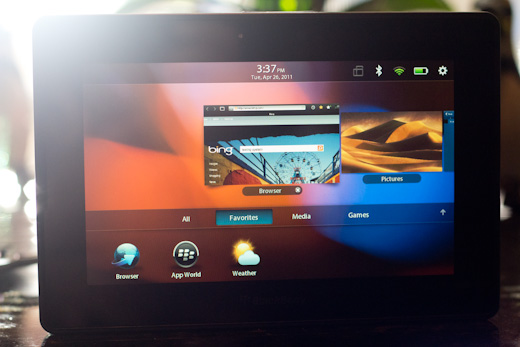 An image has surfaced that seems to be a new design of the rumored BlackBerry London prototype. Crackberry is reporting that the image is of a new class of device, which RIM calls a ‘Superphone’.

The device looks a lot like a scaled-down BlackBerry PlayBook and is said to run the new BlackBerry 10 OS. The hardware looks shockingly like a slimmed and shrunk version of the poorly reviewed tablet.

This hardware would be the first to run the new OS, based on QNX, that RIM hopes will resurrect its flagging BlackBerry line. This device could launch after two other models code named Laguna and Lisbon, which would arrive in the US, while the London would be headed to the UK.

As far as hardware, it’s all hearsay at the moment, but Texas Instruments’ OMAP5 and Qualcomm 1.5GHz dual-core chips are said to be being tested in the device.

The provenance of the slide above isn’t clear, but Crackberry appears to think that it is as legitimate as the leaked 2012 BlackBerry Roadmap deck from last week, if that’s any indication.

Read next: HTML5 is sexy, but Flash still rules when it comes to games [infographic]