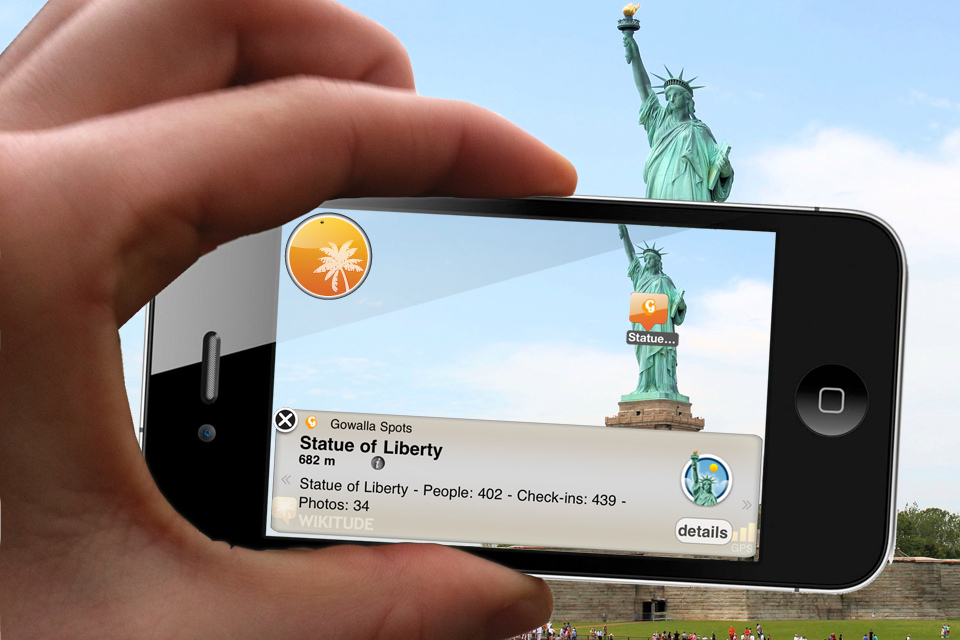 Growing up, a vast swath of my generation first learned of Augmented Reality via Arnold Schwarzenegger’s landmark performance as The Terminator. Series 800 had seemingly magical abilities as it scanned a landscape and could pinpoint the fastest route to it’s prey. While some former science fiction has never seen the light of day, thankfully, Augmented Reality technologies are making a major impact on how we view the world today.

As luck or happenstance would have it, Schwarzenegger hails from the south of Austria, while just to the northwest (Salzburg), Austrian company Wikitude is leading the charge on today’s Augmented Reality front. Wikitude has seen a number of accolades over its short three year history, including today’s announcement of their pre-installation on every future BlackBerry device. I recently sat down with CEO Martin Herdina to discuss what’s in store for not only Wikitude, but AR in general.

Wikipedia describes Augmented Reality as, “a term for live direct or an indirect view of a physical, real-world environment whose elements are augmented by computer-generated sensory input, such as sound or graphics,” a fairly straightforward and accurate statement. However, Herdina has a slightly different take on it, describing the technology as, “an enrichment of reality, via additional information and virtual content, making it much more than just some text overlaid on top of an image. It could be text, but we’re seeing more and more video and animation enrichment, including 3D object overlays.”

While the applications of AR technologies are seemingly endless, Wikitude focuses primarily on location based services and social networks through its flagship product, the Wikitude World Browser, with the primary goal of helping the user explore and enrich their surroundings. Given the size and amount of content available on this spinning globe we call Earth, how is Wikitude compiling all of this data?

“Think of our World Browser as a window. It’s a window to a huge set of data that we’ve collected and aggregated. Right now we have about 130 million point of interest, conveniently segmented into unique ‘worlds’. Content is provided by a group of more than 1000 content partners including Wikipedia, Lonely Planet, Yelp, Groupon, and the Open Streetmap Points of Interest.”

“We’ve found that location based services are a major force in Augmented Reality. In terms of advertising via retail and shopping experiences, a large number of industries are now opening their API’s to include coordinates. Groupon does this with their coupons, Yelp with reviews, etc. This is information perfectly suited to our goal of enriching consumers’ environments.”

And while Wikitude is collecting and being fed data from a vast array of content providers, Herdina notes that a large portion of Wikitude’s available content offerings are provided by their user driven content groups. Wikitude.me is an open subsection of Wikitude.org where users can create their own points of interest to be made instantly available in the Wikitude.me World, accessible from the app’s home screen.

“We have a quality control process in place, but to be honest, there are very few poor contributions being made to the project. There are a number of homegrown content communities that enjoy uploading their content to our application. For example, there’s a group in Switzerland who collects information about public toilets. But not just a ‘where’, as this group collects specific data such as public toilets accessible for those in a wheelchair, toilets that include a diaper changing table, etc. I’m not aware of any other application on the planet that allows you to search for such specificity. Not even Google Maps will do that,” says Herdina.

And it’s not just about searching for the next pit-stop, as Herdina notes that the Tourism Association of Trinidad and Tobago are also Wikitude contributors, helping tourists explore the island like never before.

When it comes down to dollars and cents, Herdina points to two specific revenue models that Wikitude employs: Premium Content and Advertising.

From the advertising side, Wikitude has grown to a critical mass, whereby businesses pay for the traffic that the Augmented Reality app can send their way. “This could be a retailer such as Starbucks, who want to ensure that every single one of their store locations are listed in our databases. When a user wants coffee near them, Starbucks wants to make sure they’re represented,” says Herdina.

I asked Herdina specifically about corporate data and locations versus user generated content.  He answered, “No, the UGC isn’t removed, but rather, we highlight the official Starbucks offering in the list and live views. For example, if I search ‘coffee’, I might see 15 markers around me, but the two Starbucks nearest me will be highlighted, ultimately grabbing users’ attention first.”

Wikitude’s Premium Content holds a wide variety of potential, but Herdina pointed out a branded content example: “Travel guides are a strong factor in Augmented Reality usage. Sure there are millions of markers across a landscape, but you purchase travel guides to see the best of the best. We’re now offering these publishers the same opportunity, but with all the additional content that can be provided via AR.”

“We’re also currently experimenting with premium points of interest. We have 3D modeling within our app, and we can overlay historic or significant models on top of real world locations. If we’re standing at Vienna’s Michaelerplatz, and I look down to see the Roman ruins, with Wikitude, we could overlay a 3D model of what the square might have looked like 3000 years ago. To a traveler, this type of content could be readily available for a sub $1 purchase.”

Announced in conjunction with this week’s BlackBerry World Conference, Wikitude will now come pre-installed on all BlackBerry devices, beginning with the newly unveiled Bold 9900 and 9930 models. Herdina says, “Research in Motion is a strong believer in AR as a discovery method. BlackBerry devices now incorporate all the features we need to make Wikitude function, and we’re very excited and honored to be included in RIM’s official pre-installed offerings. As a native super-app within the BlackBerry OS, we have the unique ability to hook into the operating system itself, taking full advantage of the handset’s power, and allowing us to utilize other core functions of the device. For example, BlackBerry users could be viewing an object via Wikitude, and discuss the image with another BlackBerry user via the BlackBerry Messenger service.”

From the monetization side, RIM and Wikitude will operate under an industry standard revenue share, allowing users to purchase the aforementioned Premium Content packages, as well as offer up RIM’s advertising network as a preferred partner.

While Wikitude may be getting cozy with Research In Motion, iPhone and Android users don’t have anything to worry about. Herdina himself carries an iPhone, and he’s quick to note the Java based similarities between the BlackBerry OS and Android. He says that while the company still has a large number of Symbian OS based consumers, given recent events, the company will not be putting any significant resources into the project.

Herdina does acknowledge that AR has been hyped quite a bit in the past, simply for its marriage of technology and real-world views. He says that now that users are accustomed to the method, it’s now time to start driving significant value to the end user.

“Our goal for this year is to continue development, keep growing, continuing relationships with our current content providers, as well as adding new ones, and specifically targeting and tailoring user data,” says Herdina. “With over 130+million points of interest, it’s easy to become overwhelmed with data. Having the right system methods, or utilizing semantic web technologies will allow us to serve more relevant, more targeted data to users.”