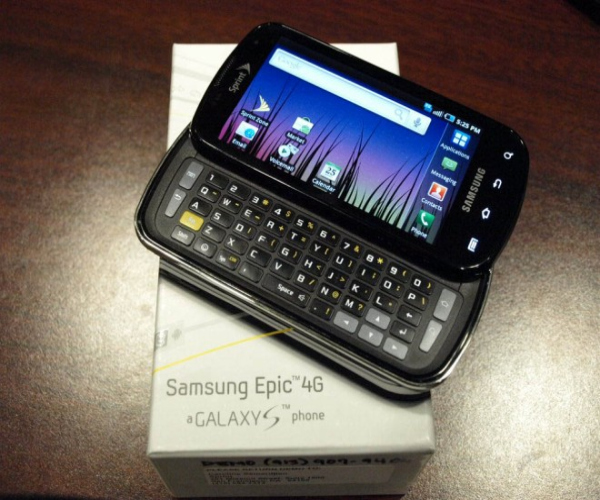 A couple of days ago, you may have caught our list of the best smartphones with big screens.  Well, we wanted to continue with our ‘Top 5 Smartphones’ series, this time focusing on devices that rock physical QWERTY keyboards.

Yes, full touchscreen smartphones might be the trend right now but that doesn’t mean text and email maniacs aren’t still looking for ways to get their fix. Fortunately, there are some great devices that are available on a host of different providers.

So, if you’re in the market for a smartphone, and you feel it necessary that you device has a full QWERTY keyboard, take a look at this list of the our top 5 devices with physical keyboards on the market today.

Again, as usual, they are listed in no particular order. It was an extremely tough call between the BlackBerry Torch and the BlackBerry Bold 9780 but the Torch wins out here because it includes both a slide out QWERTY keyboard as well as a touchscreen. However, if you don’t want to get on AT&T, and we don’t blame a lot of you, the Bold 9780 is available on a plethora of carriers and is worth a peek.

If you’re ok with Ma Bell, here’s what the Torch is all about. It’s rocking BlackBerry OS 6, the latest and greatest mobile software from RIM, it also has an optical trackpad, WebKit Browser, Wi-Fi support, GPS and a lot more.

Best of all, it’s cheap.

You can get it through Amazon for a mere penny, with a new contract of course. So, if you’re a BlackBerry keyboard homer, then the Torch is certainly a great call. While the Motorola Droid 2 is currently available for a penny over at Amazon, you probably want to hold off on purchasing it because the recently announced Motorola Droid 2 Global. It has the same beautiful keyboard as the original Droid 2 plus Global capabilities.

If you’ve handled an original Droid, then you have a good idea about what the Droid 2’s keyboard is all about. There are some subtle differences though. It has larger shift, spacebar and enter keys and it has navigation keys instead of a navigation pad.

Besides the slide out QWERTY, the Droid 2, at least the Global version, packs a 1.2GHz processor and a 5MP camera. It also has Android 2.2 aka Froyo. If you need the global capabilities, prepare to fork over $199.99 if not, hurry and snag the original Droid 2 for a penny.

They are both solid choices. T-Mobile’s G2 was T-Mobile’s first device to support their 4G HSPA+ network and it’s also, arguably, their best smartphone. And guess what? It happens to have a physical keyboard.

The G2’s keyboard has raised keys that don’t disappoint. Great spacing, great feedback, just an all around awesome keyboard experience. And that’s not all that’s awesome about the G2.

It has a blazing fast, vanilla version of Android Froyo and again, it’s one of only two phones that currently support T-Mobile’s high speed HSPA+ service, the other being the myTouch 4G.

If you have T-Mobile and want a great smartphone with a physical keyboard, considering the G2 is a no-brainer. The BlackBerry Droid. That honestly should be the nickname of the Motorola Droid Pro which just recently came out on Verizon. While it’s marketed toward businessmen and women, don’t be fooled, because the Droid Pro might have the best QWERTY keyboard on Verizon.

That’s because Motorola essentially cloned the BlackBerry experience, threw it on a candy bar form factored device, and called it a Droid. It even has a programmable application key on the right side and those good old ALT and Shift keys that BlackBerry owners are familiar with.

While the Droid Pro wows with the keyboard and form factor, you’ll have to look past some flaws with the display, specifically screen resolution which checks in at 480×320. However, in the world of smartphones with physical QWERTY’s, the Droid Pro is up there with the best.

And if you act fast, you can get one for cheap through Amazon if you head here. Sprint’s Samsung Galaxy S device, the Epic 4G, is definitely a candidate for best smartphone with a physical QWERTY keyboard. Consumer Reports has it ranked as the best phone on Sprint (the HTC EVO 4G gives it a run for its money) and for those looking to get in on the 4G WiMax action with a physical keyboard, there is only one place to go.

While it doesn’t have Android 2.2 yet, it’s coming soon, it does have a gorgeous 4 inch Super AMOLED screen, a 1GHz processor and you guessed it, a wonderful physical QWERTY. The keys are raised, they are beautifully spaced, and they are just plain comfortable to use.

That’s a pretty amazing deal for such an amazing phone.

So, there are our top 5 smartphones with physical QWERTY keyboards. If you feel like something is missing or you happen to love one of the phones on the list, feel free to let us know in the comments.

Read next: Kazakhstan beats India and China in startup awards