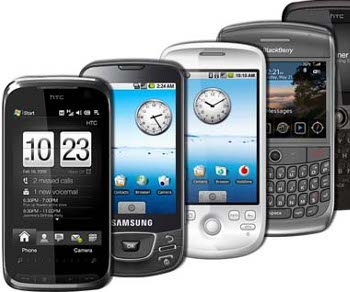 According to market research firm IDC, 54.7 million smartphones were shipped in the first quarter of 2010, a 56.7% increase over the same period last year. This is doubly impressive as growth in the fourth quarter of last year was 38%, which is usually the strongest quarter of the year.

Nokia continues to be the world’s largest manufacturer of smartphones, followed by Research in Motion (Blackberry), Apple, HTC and Motorola (see chart below). Of course, with these five companies comes at least five mobile operating systems, and although the report mentions that Symbian and the Blackberry OS are expected to have upgrades this year, it’s clear that the iPhone OS, Android and perhaps the upcoming Windows Phone OS are clearly where app developers want to be.

Smartphone growth more than doubled that of the overall mobile market (with still healthy growth of 21.7%), and clearly Apple, HTC and Motorola (with the Droid) are starting to catch up to Nokia and RIM worldwide (see the 1Q10/1Q09 Change column in the chart below). Their response? Well, Nokia for one seems to think lawsuits are the way to go.

(Disclosure: I am a former employee of IDC)

Read next: Google Buzz Now Lets You Comment Via Email