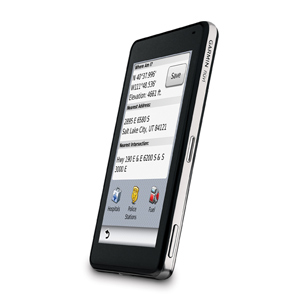 The arrival of turn-by-turn Sat Nav apps on smartphones has hit traditional Sat Nav manufacturers hard. Now Garmin is fighting back with a new device aimed to take on the smart-phones at their own game.

The launch of the iPhone app store saw the arrival of a range of diverse apps eager to take advantage of the phone’s built-in GPS capability in order to provide Sat Nav functionality.

Initially fairly basic, these apps quickly matured into fully functional ‘turn by turn’ applications which, have begun to challenge the traditional market for Sat Nav devices.

Other smart-phone manufacturers have joined the party with Nokia creating a stir in January 2010 with its rollout of a free turn-by-turn mapping app on many of its devices.  Only last week, Google announced its own free turn-by-turn navigation service for smartphones including those running on its own Android platform.

Initial responses to the rise of the smartphone Sat Nav app were of the ‘if you can’t beat’em, join’em’ variety with a number of manufacturers, including Tom Tom as one of the first, launching software-only versions of their services (and in doing so, creating some of the priciest apps in the iTunes store).

Sat Nav manufacturers are not, however, waving the white flag for the hardware…. take a look at the latest device from Garmin! The Garmin 3790T has clearly learned some lessons from the iPhone.  Aside from bearing more than a passing resemblance to the iconic smartphone, the Garmin device incorporates a 4.3 inch capacitative touch-screen with pinch and zoom functionality.

An accelerometer has also been incorporated, enabling users to quickly flip from portrait to landscape mode.

Drivers will be able to replace the inbuilt voice prompts with their own recordings, plus the visuals have been significantly beefed up to enable a slicker and more realistic road layout which, whilst it’s hardly augmented reality, will feature road signs, pylons and even trees.

Whilst there’s no built-in SIM, the device does continue Garmin’s tradition of including Bluetooth, allowing drivers to make hands-free calls in safety.

This isn’t a device you’re going to want to leave in your glove compartment for budding thieves to take a fancy to.

When you leave the car, you’ll be slipping it discreetly into a pocket (it’s only 8.9mm thick) and taking it with you.  As you leave your vehicle, you can set the device to remember where you’ve parked and give you directions back to your vehicle when on foot.

Like one or two of the newer iPhone apps (Nosey Parker and the AA), the device even alerts you to the nearest and most convenient car parks.

The Garmin 3790T is available in June (around £320 for the top-end model – equiv $490) and suggests that it’s far from ‘game over’ for standalone Sat Nav devices.  Although, if it’s competing in the general nice-to-have gadget market, how will it fare against the iPad and the iPhone 4, amongst other temptations?

There’ll always be a Sat Nav market for non-smartphone owners for some time to come.   Plus, this stand-alone dashboard-candy Sat Nav device might even tempt smartphone enthusiasts with an extra bit of cash in their pockets and who want to use their phones for other things than just navigation whilst they’re on the road.

Read next: The Analog Chat Room!