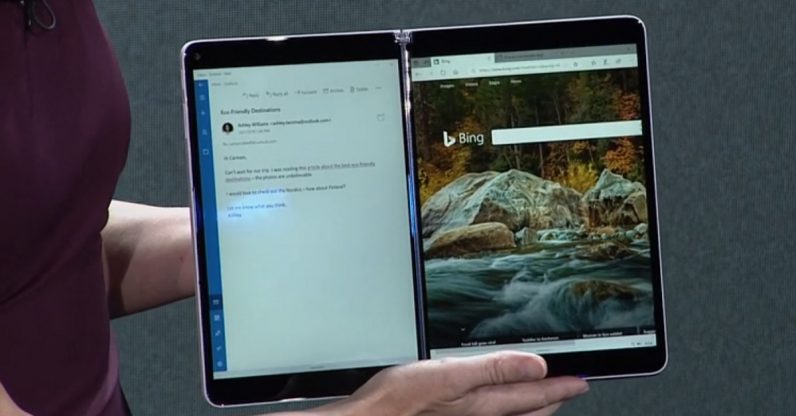 Microsoft revealed a new expression of Windows 10 at today’s Surface event, called Windows 10X. This new version of Windows is optimized to work with dual-screen devices, such as the Surfaces Neo and Duo, also announced at the same event.

Windows 10X was introduced in tandem with the new Surface Neo, Microsoft’s dual-screen device, and presumably it’ll also work with the Surface Duo phone, also revealed at the event. According to Microsoft, it allows all apps to make the best of both screens, or, as they put it, “to fuel a new era of productivity and creativity across two screens.”

Applications can be “spanned” across two screens, optimizing the layout so that it’ll work on both. It’ll also reflow the layout depending on your screen orientation. Whenever you open an app, it’ll snap to the screen you used to summon it, but if you drag the app to the divide between the two screens, it’ll automatically span both screens. The Start Menu is fresh as well. It has an attractive search bar and a selection of pinned apps, and can be opened from either screen.

Windows 10X also readjusts as you manipulate the screens — for example, it’ll recognize the Surface keyboard when you snap it over one of the screens. When you do this, it turns the part of the screen not covered by the keys into a “Wonderbar,” which includes a trackpad.

We didn’t get a release date on Windows 10X, but presumably it’ll be available Holiday 2020, the same time as the Surface Neo and Duo. Microsoft also said they want to get it into developers’ hands as soon as possible.

Check out all of the news from today’s Microsoft Surface event here.

Read next: Microsoft announces the Surface Neo, the dual-screen PC of the future