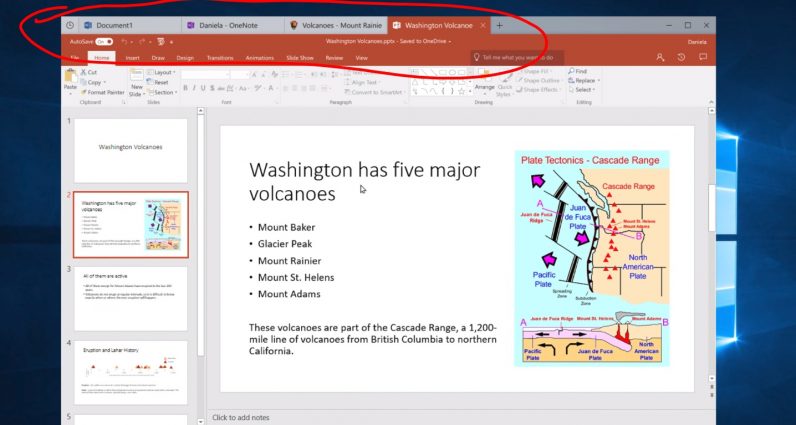 Microsoft will soon be test-driving a feature in Windows 10 that could forever change how you use your PC. It’s also a feature you’ve already been using for years.

Say hello to tabs. Or as Microsoft calls them, ‘Sets.’

While Microsoft isn’t sure whether that name will stick, the idea is to bring browser-like tabs to not just Chrome and Edge, but virtually every Windows app. Moreover, it’s not just grouping duplicate instances of a single app; you can actually combine different apps into one window. Check out Microsoft’s explainer video:

Basically, Sets could help you keep apps group related apps for particular tasks, projects, or ideas, rather than just being a mess of windows that you’re constantly rearranging. If you’re researching a paper, for instance, you could theoretically combine a PDF reader, a PowerPoint presentation, and notes all into to one tabbed window.

Granted, you could already organize your apps by task or idea by using virtual desktops, but that method has some drawbacks. You can assign different desktops to tasks or projects, for example, but you can’t see or move them all at once. Sets would be giving users another layer of control to keep things nice and tidy.

Besides, tabs are likely more intuitive for the average user. After all, organizing resources into tabs is already how we browse the web and use plenty of Web apps. Heck, this is basically how Chrome OS operates. Microsoft is simply expanding that organizational concept to the desktop with full-fledged apps.

The idea was born out of the ‘Timeline’ concept Microsoft introduced back during its Build conference in May. That feature allowed you to go back in time to see what apps you were using at any given moment, allowing you to easily resume a work setup or project. Sets are simply another way to group your apps.

At first, the feature will only be available on UWP (Universal Windows Platform) apps first because their sandboxed nature helps ensure you don’t break anything major. Over time, it seems the company hopes to expand to first part apps like Office and traditional Win32 apps as well.

In any case, it could be quite some time before the feature ever hits the public. Even users in Microsoft’s Insider testing program won’t all have access to it; the company will randomly select a small group of testers who will be able to access the feature to start. I hope I’m one of the lucky ones; as far as I’m concerned this is one of the most useful changes to Windows in years.

Coming soon to a flight near you! on Windows Blog