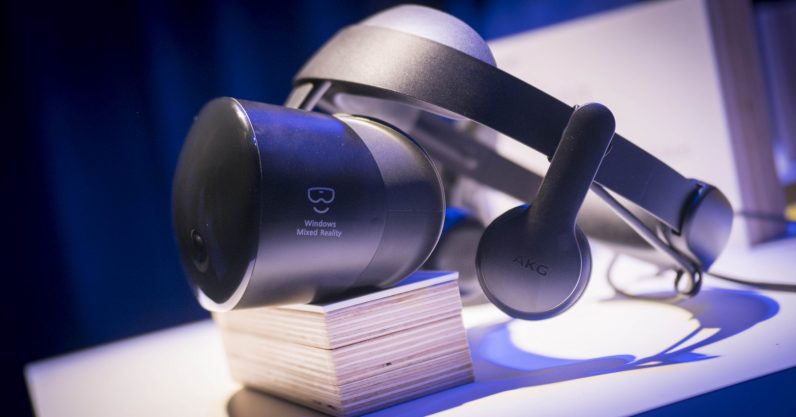 Microsoft’s mixed reality headsets have the unique trick of being able to track your position in space without external cameras, but the actual specs have lagged a little behind premium competitors like the Oculus Rift and HTC Vive in order to reach a low price point.

Samsung’s new Odyssey headset embraces the premium price tag and, at first-glance, delivers an experience that matches or surpasses my experience with Oculus and HTC headsets. Keep in mind my impressions were the result of a 7 minute demo, but that was enough to leave with a few thoughts.

Of course, I realize most people haven’t tried high-end VR headsets, let alone those from Microsoft partners, which don’t officially launch until October 17. But suffice to say that Odyssey’s combination of some of the highest VR resolution I’ve seen yet and OLED technology makes it one of the more pleasant VR experiences I’ve tried.

For comparison, the Oculus Rift and HTC Vive both have 2160 x 1200 resolutions, while the Odyssey runs at 2880 x 1600. It’s not a monumental difference but enough to be noticeably sharper than the competition. Compared to the LCDs in other Windows Mixed reality headsets, colors were vibrant and blacks were pitch black, as you’d expect form an OLED display. It did have a little bit of a ghosting effect for dark moving objects (a common problem with OLED VR headsets).

I wasn’t able to test the headphones out much in the brief demo, in a crowded press event, but from what I could tell they had a decent amount of fullness. The entire headset was one of the more comfortable ones I’ve tried, although I worry the choice of leather for padding will make them feel warm for extended play sessions.

At $499 with the controllers included, it’s firmly in Oculus territory, but so far it seems worth the price tag. We’ll have to see how it holds up once we get our hands on one for a longer period of time, but it’s nice to see Microsoft’s partners are catering to those who want a premium VR experience as well as those looking to save a few bucks.

Read next: Despite evidence to the contrary, we may still be living in a computer simulation