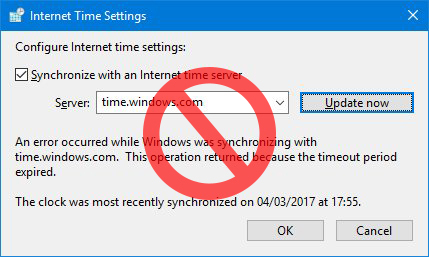 It appears Microsoft had suffered a massive technical issue that is causing its Windows Time Service to send out wrong times – in some cases almost an hour ahead of actual time – to numerous users and data centers worldwide.

While Microsoft seems to have retained control over the situation to a certain extent, its servers are still not entirely synced across the board. Windows machines and Internet Information Services servers are most likely to be affected by the error.

The issue was first spotted by numerous users on Reddit and Twitter several hours ago, but appears to still persist. It remains unclear exactly what might be causing the issue, but some speculate Windows Time Service servers have likely lost connection to external sync sources, offsetting the entire network.

Meanwhile, you might want to switch to an alternative network time protocol (NTP) until Microsoft has managed to sort out the problem. NIST, NTP and Google offer their own time services – but make sure they’re compatible with your system before you switch.

Here’s some of the chatter on the Twitterverse:

So, https://t.co/sFVhKnw64F is broken. Nobody uses that for their system time, right?

@EdFrench The more you look at time the more you realise what a mess it is. Minutes with 61 seconds. Counties in the US with their own time.

@EdFrench .. Time zones with half hour offsets. Compared to man-made problems relativity is a doddle.

As Network Time Protocol Best Practices stipulate, sending out the wrong time could chain a string of problems. Not only will all your system events have the wrong timestamp, but many security mechanisms depend on the accuracy of your clock.

Many network security mechanisms rely on time as part of their operation. If an attacker can spoof the time, they may be able to bypass or neutralize other security elements. For example, incorrect time can disrupt the ability to reconcile logfile entries on the affected system with events on other systems. The best way to protect computers and networks against undefined behavior and security threats related to time is to keep their NTP implementations current.

One way to make sure whether Windows Time Service is relaying the correct time to your system is to ping its servers and see what clock strata they return. If the server returns ‘stratum 16,’ chances are your “device is unsynchronized.”

We’ve contacted Microsoft for comment and will update this piece accordingly if we hear back.

In the meantime, you can watch this video to get a better idea of the dangers of wrong time synchronization.

Read next: This new plant-inspired tech could be the first step towards self-powered smartphones