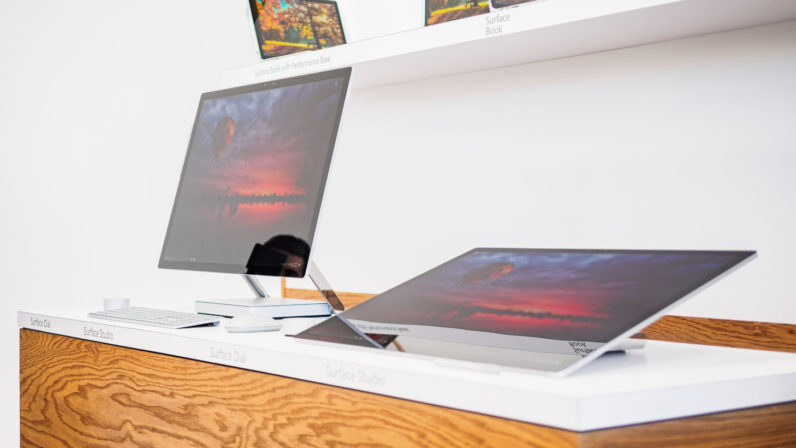 Microsoft has been going toe-to-toe with Apple’s hardware the past year or two. The Surface 2-in-1 concept is finally starting to catch on, the Surface Book was one of the best laptops I’ve ever used, and now the company is looking to reinvent the desktop with the Surface Studio and it’s quirky accessory knob, the Surface Dial.

And you know what? Microsoft might just be on to something.

We cover more features in our announcement post, but the TL;DR is that the Surface Studio is an all-in-one computer that can fold into a virtual drawing board of sorts – Surface Pen compatibility and all. 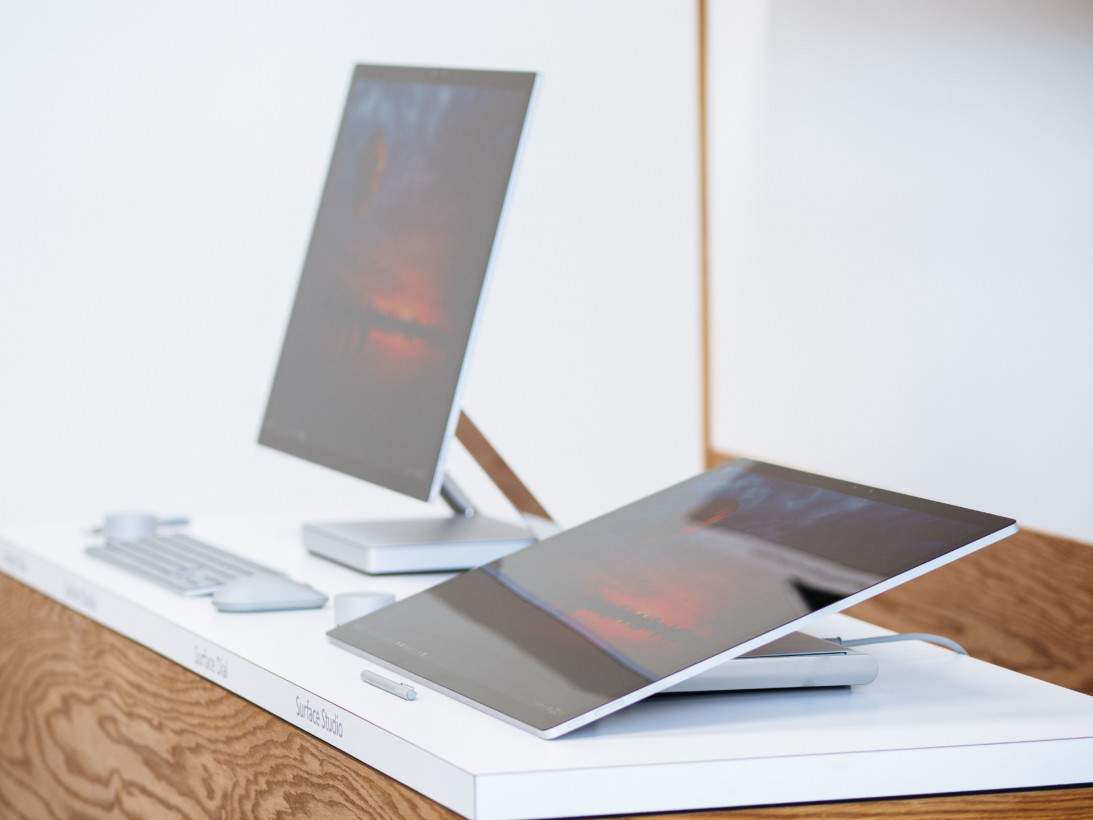 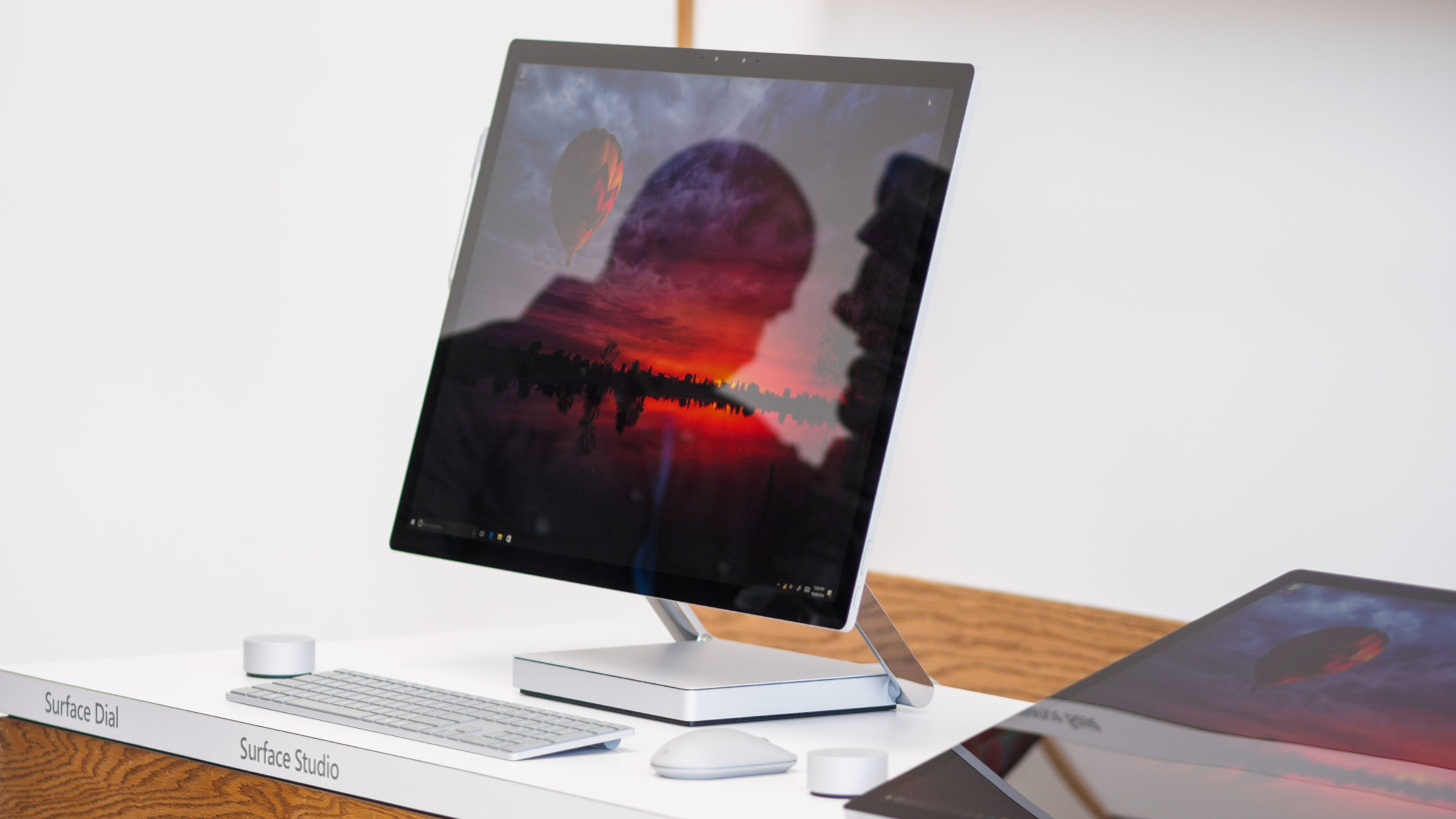 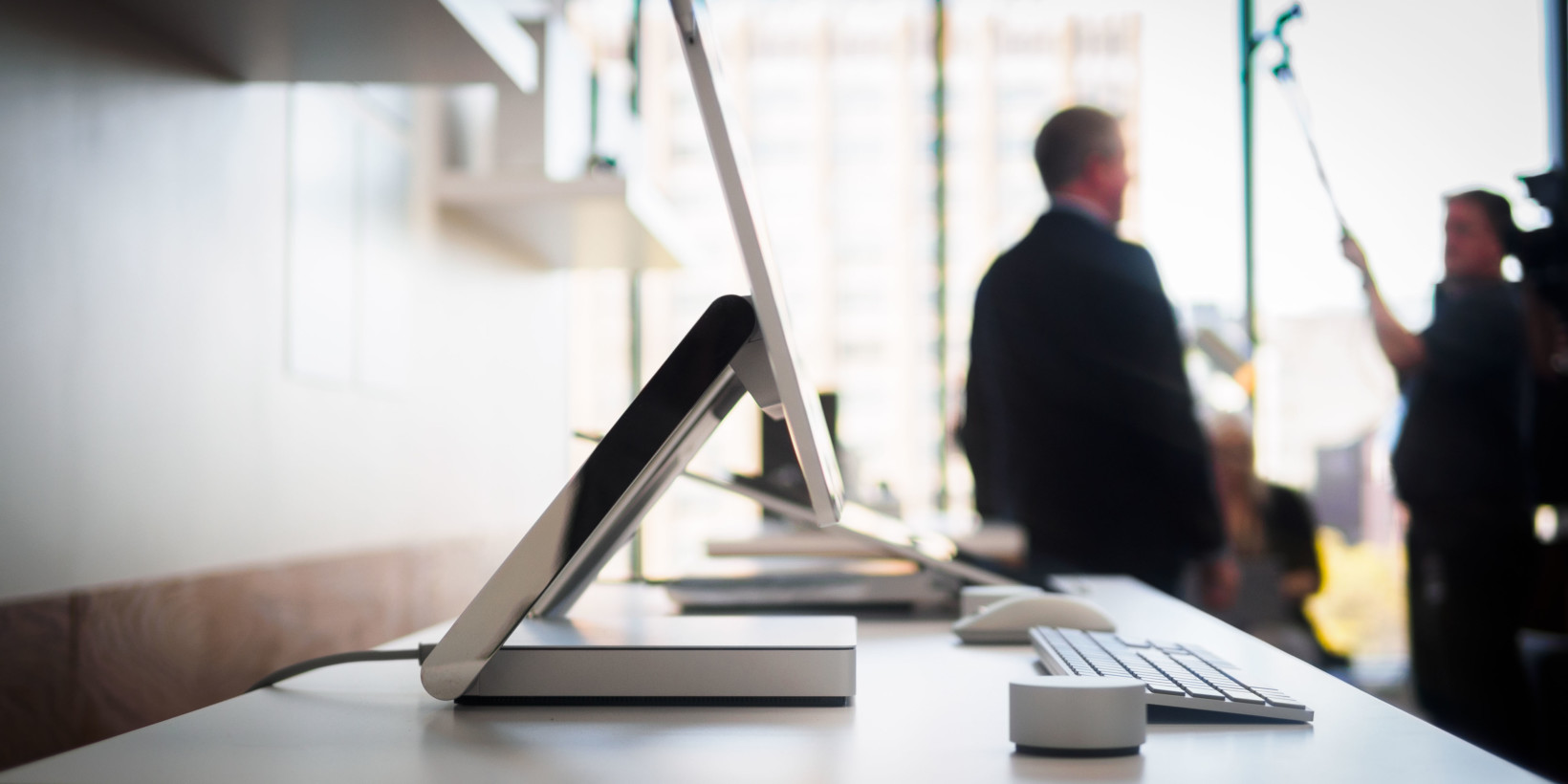 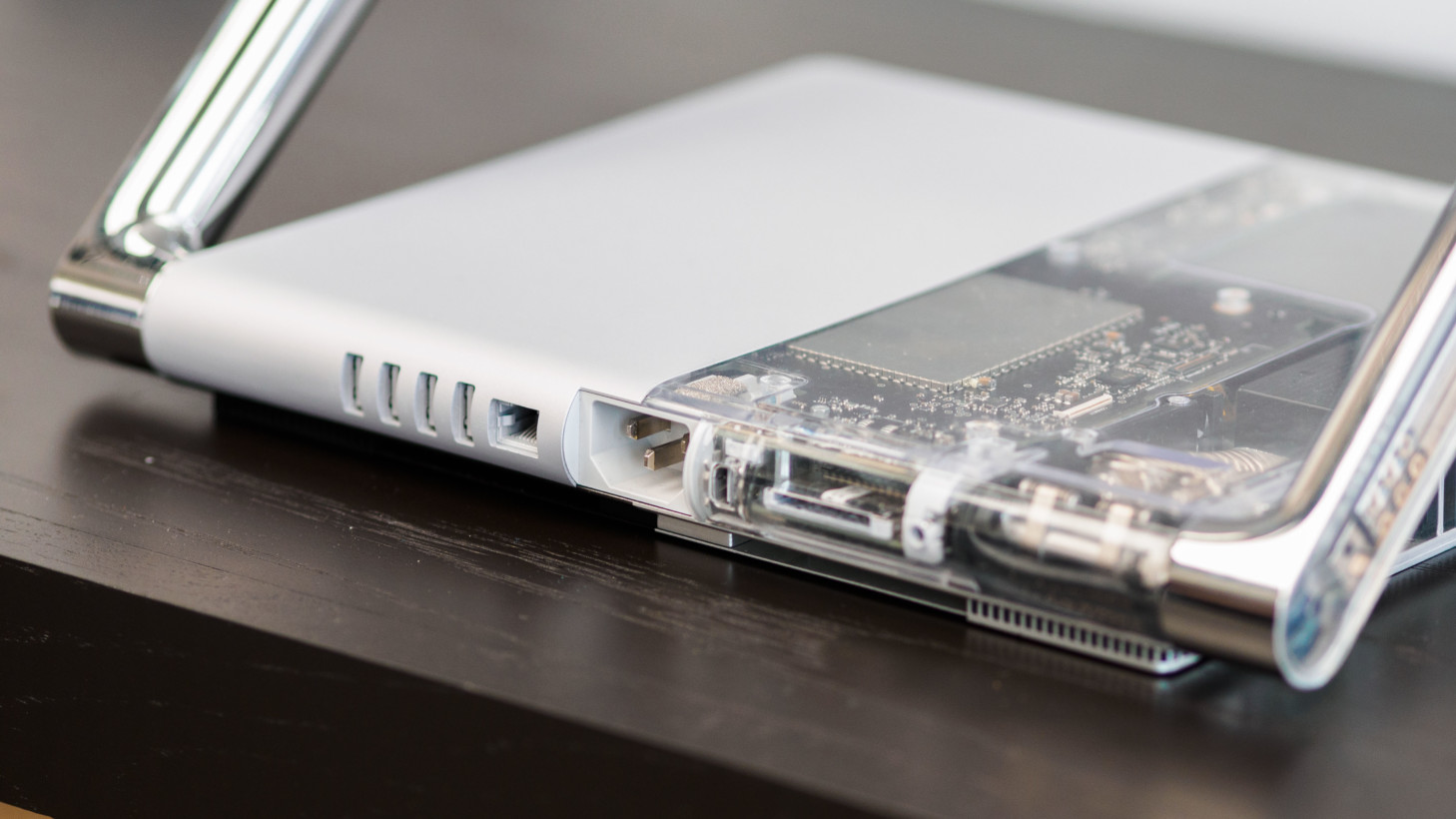 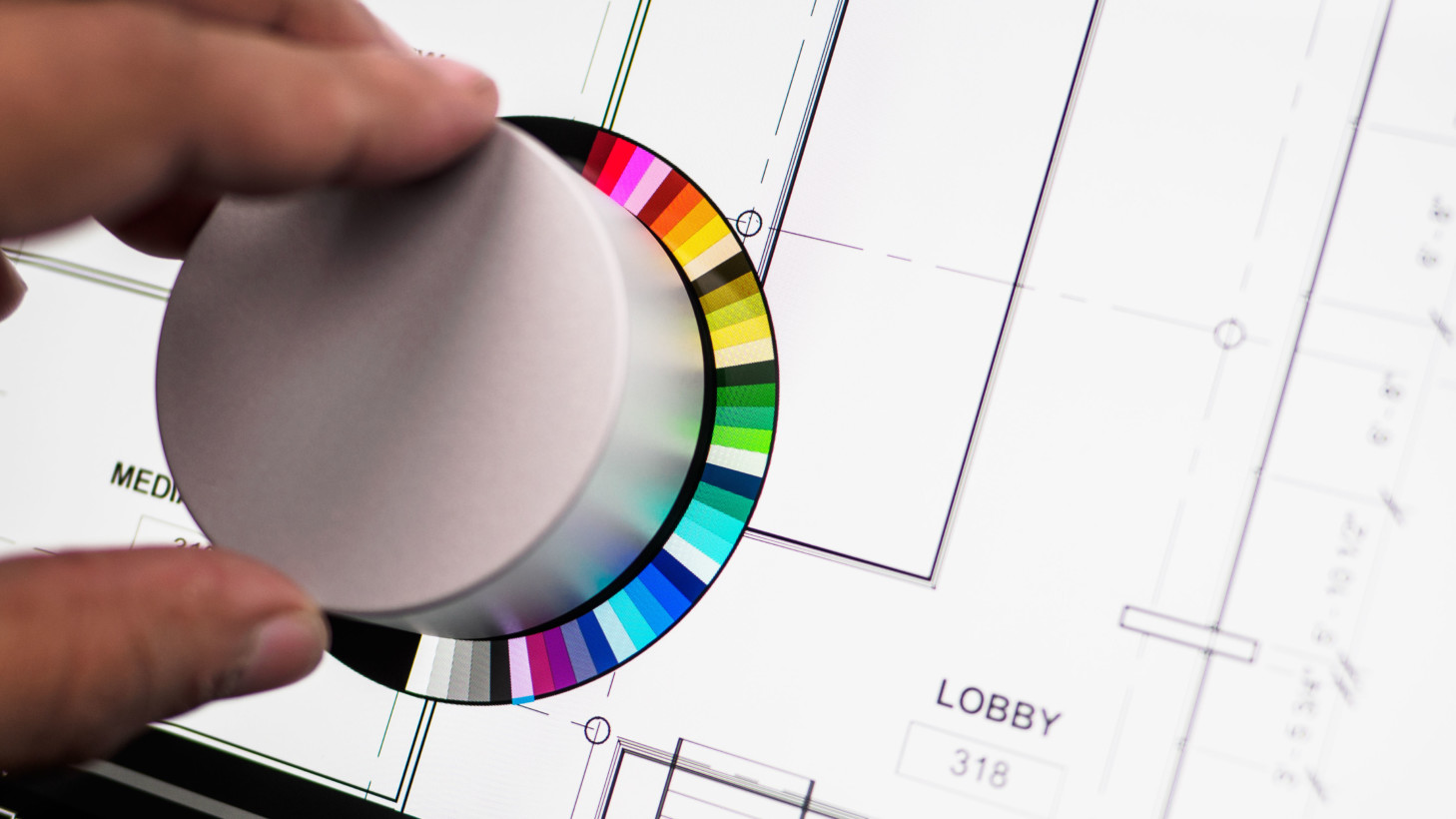 The Surface Dial is a physical knob that you can turn and click to adjust app settings and tools. Moreover, you can place the dial on the screen for more intuitive control of features, for things like adjusting Pen parameters on the fly.

There are three configurations, which vary by processor, graphics, RAM and storage.

Though we’ll have to spend more time with it long term, I feel confident saying it’s one of the best displays I’ve seen on a monitor – all-in-one or not. Being able to switch color profiles on the fly (through the Windows 10 Action Center) is also neat touch for people working who frequently work with video and photos.

That said, display is glossy, which will disappoint some people, though assume it’s probably necessary for a proper feel with the Surface Pen’s textured tip. The 2.1 speakers sounded great, but was hard to make a solid impression in a crowded press room. Meanwhile, the Bluetooth keyboard and mouse are what you’d expect from accessories for a premium all-in-one; well built, but basic in functionality.

The main attraction is the fancy hinge, which allows you to easily switch between a traditional all-in-one angle to a drawing-board-like 20 degrees. The hinge action is very smooth and extremely easy to activate with one hand. Once set at 20 degrees, it feels sturdy enough to support my weight resting on it for sketching and the like, though using it at intermediate angles will be trickier.

Speaking of sketching, Microsoft has improved responsiveness with the Surface Pen. It’s the same old Pen as on the Surface Book and Pro, but it feels about as lag-free as the Apple Pencil (though this varied by app I tried). There is no fancy tilt sensing, however.

The other half of the story is the Surface Dial, which I can see being addicting. It’s a simple knob that you can turn and click in to change certain parameters on apps that have built in compatibility. Unfortunately, it’s an extra $99 dollars (why Microsoft why?!).

For example, I was able to quickly switch between tools in an engineering app by turning the knob, and then clicking to select. You can furthermore place the knob on the screen for more specific controls, such as zooming on specific regions of an image in a side-by side view.

The rubberized base kept it firmly planted on the screen, although I did drop it once when i forgot to remove it while adjusting the display back to a standard angle. I suspect that will happen a lot.

Another neat touch: the Dial will be compatible with the Surface Book and Surface Pro as well via Bluetooth, although you can only use it off screen.

It’s easy to see how the Dial will be useful. One of my main issues with the Suface Book was the inability to use the keyboard for shortcuts while drawing on the screen; the dial essentially solves that issue in a smaller and more intuitive form-factor than attaching a Bluetooth keyboard.

Of course, the crux of the issue is whether apps will bother to properly implement functionality (it seems to work like a scroll wheel by default), but I get they hunch they will. It’s a no-brainer accessory for anyone who uses a stylus.

There’s a lot to like here. The display is awesome, the speakers are great, performance and specs are solid, and Microsoft is introducing a new form factor for the all-in-one we haven’t seen before.

That’s not to say it’s all perfect. It’s a bit of a shame Microsoft went with a 980M as the maximum graphics chip, and that it’s only available on the maximum configuration; it tells me that’s because it essentially ran out of time, and thought the newer chips weren’t necessary for its target audience.

The 980M should be able to handle light VR gaming with Oculus’ new, reduced specs – and 2D gaming at 1080p shouldn’t be an issue – but we can’t help but wonder if Microsoft couldn’t have just waited a little longer to implement something with a Pascal architecture and the related VR improvements.

Consider, for example,that laptops like the Razer Blade Pro manage to fit in a desktop-class Nvidia 1080 into a smaller overall chassis. It also would have been really nice to see at least one USB-C port – let alone Thunderbolt 3 – for both the possibility of expandable graphics and the high-speed accessories often used by photographers and videographers , and which are only going to become more common as USB-C become more popular.

Oh, and I’d love a video-in port for that gorgeous display.

But let me not get to picky. The Surface Studio looks like a heck of a computer. Of course, $3,000 is far from chump change, but I’d argue it’s a solid value, especially considering that larger Wacom Cintiq tablets used by many designers and artists folks go for comparable prices, with lower specs and arguably less features.

First and foremost though, the Surface Studio actually tries to do something new with the all-in-one PC, which companies have basically treated like iterations on the iMac concept for many years now.  Meanwhile the huge touchscreen canvas and extra Surface Dial features provide a solid answer to the question of “why not just buy or build a cheaper desktop.”

Much like the Surface Book made me feel about laptops when it was announced, the Surface Studio is the first time I’ve been excited about a desktop in a longtime. Here’s to hoping it lives up to the hype when we put it through its paces in the long term.

Follow all of our coverage of Microsoft’s Windows 10 hardware and software event here.

Read next: 13 of the best reaction tweets about Microsoft's Windows 10 event