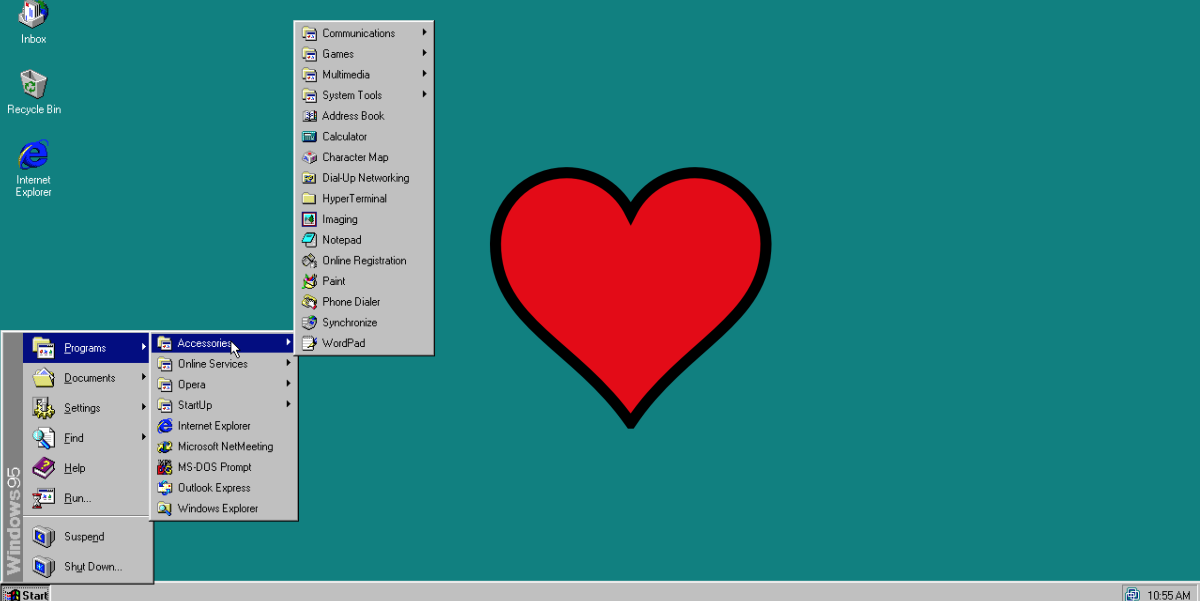 The startup sound. The burble of the modem connecting. The fevered anticipation of watching an image load on the Web. The unfettered joy of playing Minesweeper or watching the cascade of the Solitaire tiles.

Windows 3.1 was my first software kiss, but Windows 95 was my real first operating system love.

Win 95 was the first operating system in my lifetime that felt like a star was born. It arrived with a Rolling Stones-endorsed advertising campaign, a blitz that seemed to blanket every surface.

Of course, the Macintosh had been a starlet before Windows 95 sashayed onto the scene, but I was just a baby when that was going on.

My dad built his own computers from early on. We always had some jerry-rigged solution chuntering and steaming beneath the desk and above it, staring mad-eyed at the monitor was my old man, cursing Bill Gates like he was an old testament demon.

I love Win 95, because it opened up possibilities to me. Encarta was a thing of wonder before Wikipedia broke open the world’s information for all of us to feast on. Word and Paint were canvases for my imagination.

Of course, Win 95 wasn’t perfect. It was as bug-riddled and ridiculous as any operating system before or since, but it gave me the opportunity to grok what computers could really do.

Somehow, in my head, that endless maze screensaver is still looping, that startup sound is still ringing out. I’m writing this on a Mac, but in my heart, I’m still running Windows 95.

Read next: Microsoft Research’s new app turns your phone into a 3D scanner