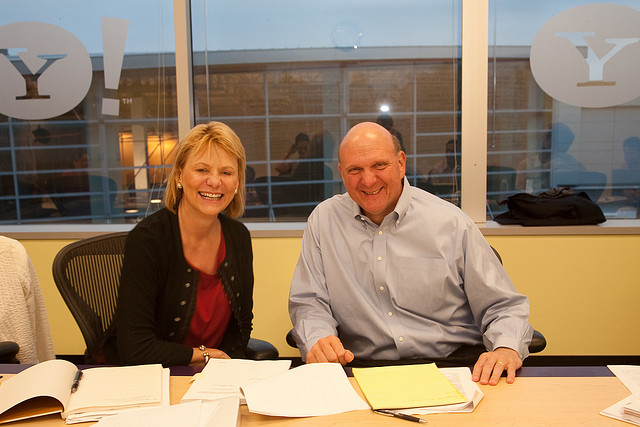 Steve Ballmer was at the Web 2.0 conference, and there was a main recurring theme. Social.

The CEO of Microsoft said that “Apple has punted on social”, despite its integration of Twitter in iOS5, and discussed Microsoft’s acquisition of Skype and deep partnership with Facebook, and would like you to believe that Microsoft is right in the middle of social. Ballmer pointed to the strengths of Microsoft’s ability to link your social personas using its Windows Live ID platform to illustrate this.

When asked about Google+, Steve Ballmer refused to discuss any competition between the two companies in social, and feels like it’s in a stronger position with Skype as a part of Microsoft.

We don’t don’t have to take on every battle

Ballmer also openly expressed and admitted Microsoft’s “luck” in not purchasing Yahoo! for 44.6 billion dollars last year. The CEO says that its partnership with Yahoo! continues to be strong, and he is proud to bring Microsoft users the vibrant Yahoo! Content.

When asked about Bing and the search market, Ballmer proudly said that Microsoft has taken the number two position after Google with a 15% share of the market. When it came to the cloud market, Steve Ballmer announced that Microsoft is “All in, baby” and says that “Microsoft is beating Google on apps in the cloud”, but provide no data to back up the claim.

Steve Ballmer seemed to gloss over XBox, which has indeed seen much success. When it came to the phones, Ballmer said it was “hard to get excited about the Android phones“, without much explanation, but said that iPhone was “a good competitor” to Microsot’s upcoming Windows 8 phones.

It sounds like Steve Ballmer and Microsoft is indeed trying to take on every battle, despite his claim.

Read next: Diaspora: Paypal blocked our account and is preventing donations