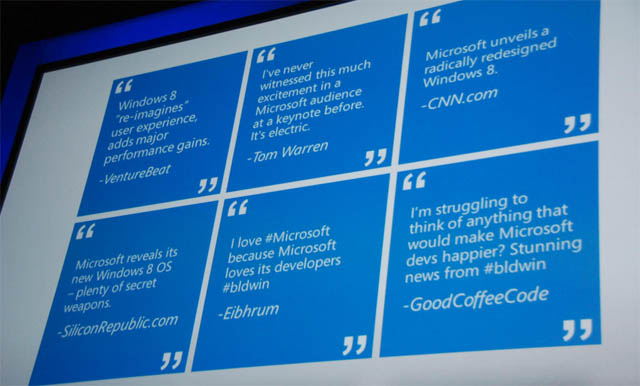 There have been 500,000 downloads of Windows 8 Developer Preview in just under 24 hours, said Microsoft CEO Steve Ballmer today at the BUILD developer conference. This is pretty impressive demand for what amounts to an early alpha build of Microsoft’s next OS.

Ballmer’s keynote was also punctuated with Ballmer discussing the reaction of the community to the release of Windows 8 DP, displaying a selection of positive comments in front of the assemblage. Including a quote from Winrumor’s Tom Warren “I’ve never witnessed this much excitement in a Microsoft audience at a keynote before. It’s electric.”

To give a bit of context, Apple served up 1 million downloads of OS X Lion in 24 hours after its release on July 20th. The downloads exceeded expectations for the first ever digital-only release of a major OS. 500K may be less downloads overall, but it is quite impressive when you think that it is an OS that is sure to be buggy and is nowhere near complete. It also speaks to the developer enthusiasm surrounding Windows 8 and its new Metro UI. Here’s hoping that we get some cool apps out of this fervor before Windows 8 releases, some time next year.

For a full rundown on Metro, the Windows 8 DP and the prototype development tablet, check out our own Alex Wilhelm’s walkthrough here.

Read next: Evidence surfaces of iMessage coming to iChat on OS X Lion