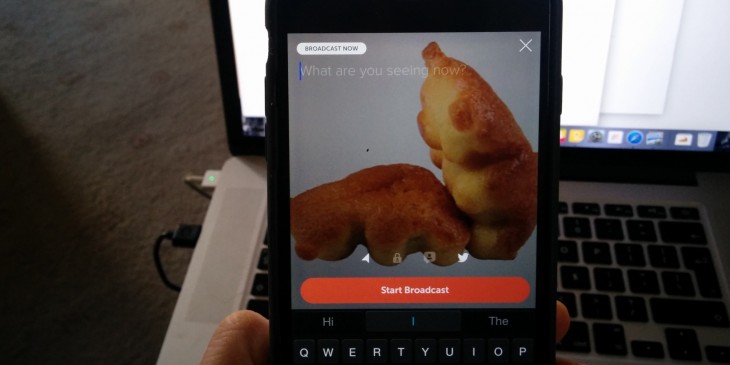 The arrival of Meerkat and Periscope led to a rash of stories in the mainstream press about the impending flood of filth on the new live streaming platforms.

But in the world of cam girls (and boys, and all points in between) performing on camera for the internet isn’t novel and these new consumer apps aren’t all that appealing.

I asked Shirley Lara, COO at Chaturbate (NSFW), one of the Web’s most popular cam sites, about Meerkat, Periscope and Snapchat, all of which have pretty strict though frequently flouted terms forbidding adult content. It’s safe to say she’s delighted:

It’s okay that these services are so strong on explicit content. It’s okay that they crack down. We like it because if people want to see the good stuff, they have to come to our site. I don’t want Snapchat to be competition for us!

For now, cam performers have mainly stayed away from Periscope and Meerkat, leaving the nudity to unpaid exhibitionists. Snapchat has been popular though, despite the service’s attempts to shut cam girls down. Lara says:

Snapchat is a way for performers to invite their fans more into their personal lives. We feel like it’s a tool for them to build their fanbases. A lot of girls sell access to their Snapchat account for Chaturbate tokens [Ed: the site’s virtual currency].

One effect of so much online exhibitionism could be growth in the number of people turning to camming as a career option. Of course, Lara thinks that’s likely – it’s in her interest to predict as much. In fact, she essentially believes that the gamification of our modern lives has made the model more appealing:

I think it’s really revolutionizing the way money is earned. With that certain age bracket – millennials – we’re all into games. It’s a way for people to earn tips and working online is more interactive. It makes it more of a friendlier process – the consumer has interaction with the girl. It’s fun for everyone.

But the ‘fun’ and impression of a close connection can often lead fans to believe their relationship with performers is more intimate than it really is:

The persona that the girls have online, it’s their job to seem somewhat available, they’re playing into someone else’s fantasy. Men sometimes do mistake that connection for something different.

While it’s too early to assess how much familiarity with live streaming through consumer apps like Periscope will translate to people making the leap to camming, Lara claims other services have acted as a gateway:

There are girls who play video games naked on our site and are heavily into gaming. I think they come from Twitch and they bring it a step further onto Chaturbate.

She argues that webcam performers are quite different from traditional adult performers:

While there’s some merit to that argument, there are also still major ‘content farms’ in Eastern Europe and beyond where women are required to sit in rooms for long shifts performing for viewers. This is not entirely a brave new world of empowered self-employed, self-made women.

They are coming up. Occasionally we’ll see a male performer in the top row on our site. The gay market is not too bad. Some of the male chat rooms are doing really well.

She also believes women are a growing segment of the audience:

Women are definitely becoming more frequent consumers of cams. One of my neighbours was getting her PhD in economics. After living next to her for a couple of years, I finally told her who I work for.

As our over-sharing culture evolves, the world of web camming will keep changing too. Lara expects ever more specialised sites to pop up:

In five years, I think there’ll be more niche-based sites. That’s why we launched tags, because we wanted the consumer to instantly be able to find what they’re looking for.

And when I mention Oculus Rift and virtual reality, she just chuckles knowingly.

Read next: Periscope Won’t Change the World, Whatever Journalists Say

Read next: The problem with human resources